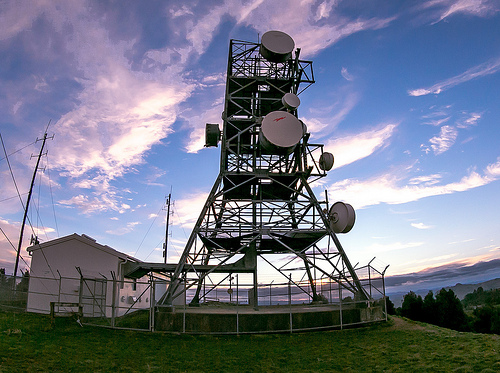 The Association of Caribbean Media Workers says the controversy underscores the need for a broader review of broadcast legislation in the Caribbean. Credit: pbkwee/cc by 2.0

Both national and international media groups have criticised the move, even as the Kamla Persad Bissessar government insists that these are “not really major issues”.

Under the licensing agreement between radio and television broadcasters and the Telecommunications Authority of Trinidad and Tobago (TATT), the government may use 14 hours of airtime weekly to “reasonably declare any matter or event to be of public interest and require the concessionaire to broadcast”. But the clause has never been invoked, until now.

“This facility we are asking radio and television stations to provide for us will be to give information relating to the operations and the policies of the various ministries, how they are using the resources of the people,” Communications Minister Jamal Mohammed told IPS.

Mohammed said he hopes “good sense” will prevail and the media houses will comply with the government’s wishes to make use of “its time” allocated under the licence agreement.

He dismissed suggestions that the four-party coalition government planned to punish rebellious media houses by withholding advertising, or that the decision to enforce the regulation was to ensure the financial ruin of those considered to be anti-government in their programming.

IPI, however, notes that previous governments never utilised the clause, which it argues should only be invoked in cases of national or local emergencies, rather than in the name of the broadly defined term “public interest“.

‘‘All other requests made by the government should be optional. Fundamentally, it should be underscored that the role of private media is not to act as spokesperson for the government. If a government wishes to make its voice heard, it has the option to purchase airtime,” the group said in a statement.

The Association of Caribbean Media Workers says the controversy underscores the need for a broader review of broadcast legislation in the Caribbean.

“The ACM is of the view that while the mandatory broadcasting of government content has been a longstanding practice in the Caribbean, there must be a re-think of its impact as a derogation of press freedom,” ACM president Wesley Gibbings told IPS.

“It might be that broadcasters may wish to concede some ground on this issue, but it must be a matter of negotiation and not coercion,” he added.

Following the two-hour meeting, MATT’s president Suzanne Sheppard told reporters her organisation’s position on the government’s request “is that we are not at all in favour of this demand for broadcasting entities having to adhere to this requirement”.

She warned that such a development “has implications for the bottom line and the way stations operate”, adding, “we don’t see the measure as really healthy or necessary”.

Asked by IPS if he and the government were now engaged in an exercise of futility, Mohammed replied, “That’s your interpretation, but I have my job to do.”

The government’s push to invoke the law comes amidst what MATT referred to as “vicious unwarranted attacks on working journalists” by senior government ministers in recent weeks.

Last month, National Security Minister Austin “Jack” Warner appeared with other government ministers on a television programme, ironically titled “Democracy is Alive”, and singled out an investigative reporter for criticism.

MATT said the journalist and others “have been doing legitimate media investigations into certain matters and they now find themselves the target of several anonymous emails which have also been circulating on the Internet”.

MATT has also noted the public announcement by Warner of his intention to acquire two newspapers here, noting that in small societies “such as this one, much of the news is based on the government’s activities”.

Mohammed himself wrote a “private and confidential letter” to the head of news at a television station here accusing him and a local newspaper of embarking “on a sad journey to discredit and destroy” the government.

IPI Executive Director Alison Bethel McKenzie said for Mohammed “to engage in this kind of direct intimidation of the media is highly troubling and, unfortunately, indicative of a recent pattern of abuse by Trinidadian government officials against the press.”

In the interview with IPS, Mohammed conceded that he made “a mistake” in writing to the journalist in his personal capacity and not as a government minister.

“That is the mistake I made, when I sent the note I wanted to do it as an individual and I realise now I can’t do that,” he said, noting that “I specifically put at the top (of the letter) not for broadcast, not for publication, for your eyes only, private and confidential”.