DOHA, Qatar, Dec 7 2012 (IPS) - Food prices will soar and hundreds of millions will starve without urgent action to make major cuts in fossil fuel emissions. That is what is at stake here on the last day of the U.N. climate talks known as COP 18, scientists and activists say. 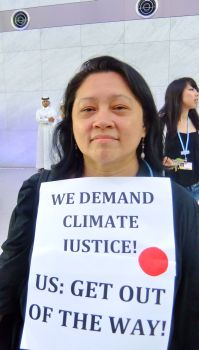 Lidy Nacpil of Jubilee South Asia Pacific. Nacpil is based in the Philippines, which is currently experiencing devastation as a result of Typhoon Bopha. Credit: Stephen Leahy/IPS

“It is very strange there is no emphasis on food security here in Doha,” said Michiel Schaeffer, a scientist with Climate Analytics.

“There is no question climate change poses a major risk to our ability to produce food,” Schaeffer told IPS.

Climate Analytics, along with Germany’s Pik Potsdam Institute, prepared the World Bank report “Turn Down the Heat” that warns many parts of the world won’t be able to grow food if global temperatures rise by four degrees Celsius (7.2 degrees Fahrenheit).

The report also warns humanity is on the path to a four-degree-C world, a world with unprecedented heat waves, severe drought, and major floods, with serious impacts on ecosystems and agriculture.

A four-degree-warmer C world means an average of four to 10 degrees warming over land, too warm for many crucial food crops. Large parts of Africa, China, India, Mexico and the southern United States will suffer declines for that reason, said Schaeffer. There will also be significant changes in rainfall patters and higher evaporation levels.

With just 0.8C of warming there have been widespread droughts, flooding and extreme weather events linked to climate change. Food prices have jumped, as large areas of the U.S. grain belt faced drought this year. Food prices will spike when extreme events occur in food-producing areas in the future, he said.

Research shows that even at two degrees C of warming, there will be serious food production problems at regional levels. If temperatures go beyond three degrees, it becomes a global problem. Without major reductions in fossil fuel emissions, a three- to four-degree C world collides with peak population growth.

“This will be catastrophic,” said Schaeffer.

Negotiations are a “million miles from where we need to be to even have a small chance of preventing runaway climate change,” said Lidy Nacpil of Jubilee South Asia Pacific, a network of faith-based and development organisations.

COP 18 is in its final few hours on Friday with no additional emissions cuts on the table. Talks will go late into the night and perhaps continue on Saturday.

“We cannot go back to our countries and tell them that we allowed this to happen, that we condemned our own future,” Nacpil said in a statement.

“African negotiators are throwing their hands up in despair, and asking why they should even bother coming to the negotiations, if the developed countries continue to wring more demands from us in return for no money or commitments,” said Seyni Nafo of Mali and a spokesperson for the African Group of Negotiators in the U.N. climate talks.

“This cynicism is at its most stark in the agriculture negotiations,” Nafo said in a statement.

Without greater emission cuts, it will undermine our ability to grow food or adapt, said Meena Raman, a negotiation expert at Third World Network, an NGO based in Malaysia.

“There is still a fighting chance here in Doha for something,” Raman told IPS.

One thing that’s needed is the promised financing from industrialised nations to help less developed nations cope and to strengthen their food production systems.

“Finance for adaptation is a key demand of developing countries here at the climate negotiations,” said Doreen Stabinsky, professor of Global Environmental Politics at the College of the Atlantic.

“Without adaptation, global food production is likely to suffer losses of 14 to 30 percent in the three major crops of spring wheat, maize and soy,” Stabinsky said.

Even if action on adaptation is taken soon, there will still be losses ranging from four to 26 percent.

“We need to start increasing local and crop diversity now” to build resilience to extreme climatic conditions farmers are beginning to face, said Teresa Anderson of the Gaia Foundation, the UK partner of the African Biodiversity Network.

Traditional farmers have hundreds of different types of seeds for different conditions, but they are often pushed aside in favour of technological fixes for food security such as hybrid and genetically engineered seeds, Anderson told IPS.

“These farmers can have tremendous diversity even within the same variety of maize, ones that sprout sooner, or flower later,” she said.

That kind of diversity greatly increases the odds of getting a decent harvest, whereas modern monoagricultural approaches only succeed under certain conditions. The latter approach is the one being pushed by agribusiness and governments. If they succeed, there is no question it will be a huge failure under the extreme conditions of climate change, she said.

“I can’t explain why industrialised nations here in Doha can’t see the urgency of all this,” Anderson said.