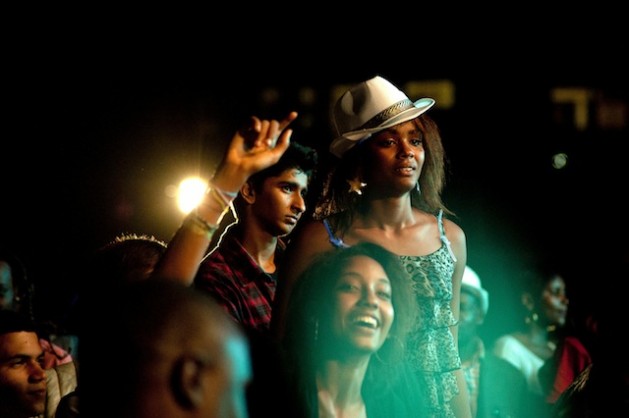 Ugandans in the VIP seating area at a recent Sean Kingston concert. Credit: Will Boase/IPS

KAMPALA, Dec 26 2012 (IPS) - Rising investments in Africa’s service sector, the unlocking of its vast natural resources and the sound economic policies pursued by African countries in the last two decades are spurring the rise of the continent’s middle class at a faster rate than population growth.

“Liberalisation of African economies resulted in improved efficiencies and saw rapid growth in the service sector. Private sector-led growth has resulted in the growth of the middle class on the continent,” he said.

The African middle class is characterised by a per capita daily consumption of two to 20 dollars, although this class has a high concentration at the lower end of consumption, according to an African Development Bank (AfDB) report titled “The Middle of the Pyramid”.

According to the AfDB, by 2010 Africa’s middle class had risen to an estimated 34 percent of the continent’s population or nearly 350 million people – up from about 126 million or 27 percent in 1980.

The middle class is widely acknowledged to be Africa’s future, the group that is crucial to the continent’s economic and political development. But it is difficult to determine exactly who falls into this key group and even harder still to accurately establish how many middle-class people there are in Africa, according to the AfDB.

In Uganda, being middle class is determined by having a good education, being able to rent or own a good home, having access to the internet, making frequent visits to a supermarket and spending the equivalent of 15 dollars a day, Stephen Kaboyo, the managing partner of Uganda-based research company Alpha Partners, told IPS.

Joseph Nsubuga, a land dealer near Kampala, the Uganda capital, saw an opportunity to be part of the rising middle class and grabbed it.

“Rising incomes for many people in the country sparked off demand for land where I saw an opportunity to advance my own fortunes. I started by selling what I inherited from my parents but it is now my fulltime job to buy and sell land. My fortunes have improved and I am able to send my children to good schools,” Nsubuga told IPS.

James Babalanda, a Kampala-based educationist, also saw an opportunity to improve his quality of life. “Since people with increased incomes wanted good electronic equipment, I decided to open a number of shops dealing in these items in the capital and, believe me, I am living a fairly good life. My business is ever growing because of a ready market,” he told IPS.

Bategeka said that room for further growth of Africa’s middle class abounds,but is dependent on increased government investment in infrastructure.

“Uganda is a good example of how economic reforms are enhancing people’s incomes, and this growth would have been higher if investments in infrastructure were higher. Most countries have been slow in providing faster private growth because of deficits in infrastructure, which is key to growth,” Bategeka said.

By ditching state controls and embracing private sector-led policies, African economies stimulated the growth of the middle class, and there is room for further expansion with more public sector investments in infrastructure projects, Bategeka said.

“The introduction of liberalisation, which focused on private sector-led growth, is key to the growing middle class on the continent,” said Bategeka. “Countries introduced sound economic policies which controlled inflation, benefiting investments in their economies.”

“Investments in the service sector are some of the drivers of middle class growth on the continent. The sound macroeconomic policies at the same time attracted foreign direct investments which helped to grow the middle class,” he said.

North African countries have a higher concentration of middle class society, with Tunisia having the highest proportion at 89.5 percent, followed by Morocco with 84.6 percent.

Liberia has the lowest concentration of middle class among the countries surveyed, with only 4.8 percent of the population falling into this category, followed by Burundi at 5.3 percent.

“Africa’s middle class is a key source for private sector growth in Africa, accounting for much of the effective demand for goods and services supplied by the private sector,” according to the AfDB.

Sub-Saharan Africa remains insulated from the negative factors affecting growth in developed countries and the economic activity in the region is generally robust with growth in 2012-2013 expected to remain the same as it was a year earlier, the IMF said in its October 2012 regional outlook for sub-Saharan Africa.