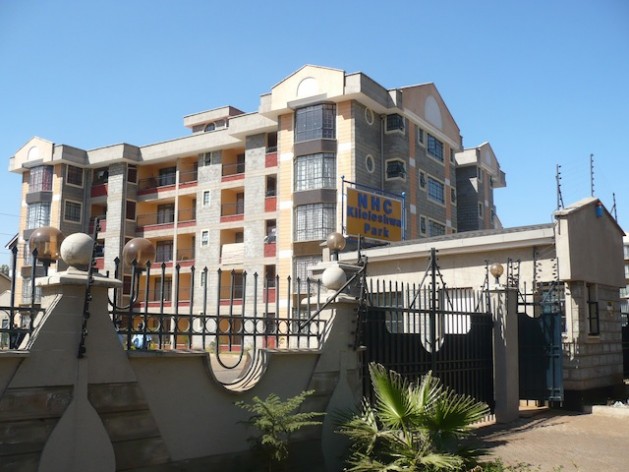 A block of flats in Kileleshwa, a smart, middle-class area in Nairobi, Kenya. Credit: Brian Ngugi/IPS

NAIROBI, Dec 26 2012 (IPS) - Despite the development boom in state-of-the-art luxury homes in Kenya, the country’s upper class has fallen on hard times and can no longer afford them, according to economic experts here. Instead, Kenya’s formerly wealthy have now become part of the continent’s growing middle class.

According to the African Development Bank, by 2010 Africa’s middle class had risen to an estimated 34 percent of the continent’s population or nearly 350 million people – up from about 126 million or 27 percent in 1980.

Kenya’s middle class was believed to include those people who could afford an average lifestyle and decent and spacious housing, and who were educated and could send their children to affordable private schools, says Macharia Mwangi, an economic consultant in this East African nation.

“That is no longer the case. Areas that had been mapped out for middle class residents are now being inhabited by the upper class, who can no longer maintain their costly lifestyles. However, on their way down, they still have the resources to afford a fairly above-average lifestyle,” says Mwangi.

He adds: “As a result, Kenya’s middle class drive fuel guzzlers, take their children to international schools and are bosses in big companies. As the upper class moves downwards, they still want to live in apartments that are comfortable and modern. This has pushed the price of middle-class housing beyond the reach of those who are rightfully middle class.”

The Knight Frank’s 2011 Prime International Residential Index (PIRI), which monitors price changes across the world’s top-end property markets, shows that Kenya’s luxury real estate market is ahead of every other country globally in terms of growth and profit margins. The value of Nairobi’s prime real estate grew by 25 percent in 2011. On the Kenyan coast property prices went up by 20 percent, higher than other major cities in the world such as Miami, which had a growth of 19.1 percent; London, which had a rate of 12.1 percent; and Shanghai, which had negative growth of -3.4 percent.

However, according to the index, the average price per square metre of real estate in Nairobi is the lowest globally at 1,700 dollars. But foreign investors favour the Kenyan market due to the high profit margins, PIRI says.

Janet Mundia, a property owner in Kileleshwa, a smart, middle-class area in Nairobi says: “Luxury apartments are being built for the local market and … while they are modern and very comfortable, they are still not (of the same) standard of luxury homes.”

“For a two-bedroom luxury apartment you pay about 1,000 dollars a month. For a luxury home it’s twice that or more … Luxury homes are also very spacious. Each house is built separate from the other and the finishings are done to perfection. They also come fully furnished.”

Prices of luxury homes here range from 400,000 dollars to one million dollars and upwards. But locals are not solely snapping up these houses. Only eight percent of the country’s 41.6 million people could afford a mortgage, according to statistics by the World Bank and the Central Bank of Kenya (CBK).

“Financing remains an issue for the many Kenyans desiring luxury homes. The cost of borrowing keeps rising even as property prices continue to skyrocket. Of late, interest is rising even on non-performing loans,” Andrew Kariuki, an expert in fixed income and money markets at the Diamond Trust Bank, explains.

The upper class is now jostling for affordable land on the outskirts of Nairobi and is building lower-budget, but comfortable, homes.

Kariuki says that those Kenyans who can afford luxury housing are from the diaspora.

According to CBK, “Kenyans living, working and studying abroad repatriated a total of 891.1 million dollars in 2011.” In comparison the Kenya Tea Development Agency says that tea brought slightly less money into the country – 850 million dollars – in 2011.

According to Danson Mwangangi, an economist and market researcher in East Africa: “We are now experiencing the emergence of a new upper class comprised of the diaspora, expatriates, diplomats, CEO’s of multinational companies and even people in organised crime, such as terrorists.

“Of course there are still Kenyans who can afford upper class lifestyles and pay 2,000 dollars per month in rent. But what market trends are showing us is that they are getting fewer,” Mwangangi says.

Meanwhile, Mwangi says that most up-market places are defined by their proximity to the city centre. “In upper-middle class areas, you can access Nairobi in 10 minutes. There, paint isn’t peeling off the buildings, security guards are stationed at the gate at all times, parking is available and big enough to accommodate all the tenants, sanitation is well organised and water is available.”

“People who live in upper-middle class areas earn at least 1,500 dollars per month. The shopping malls in their areas are spacious and attractive, with cinemas, food courts, bars, banks, supermarkets, trendy clothing stores and so on,” he adds.

Economic experts now warn these market trends are not healthy for the economy.

“More and more Kenyans will be pushed below the poverty line. Insecurity and crime will continue to ascend … because we will all be jostling for the same limited space,” Mwangi says.