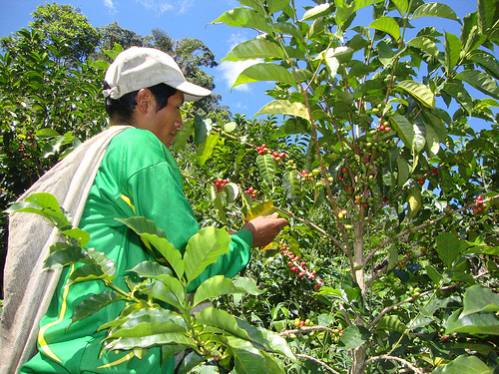 Coffee growing in the forests of Puno, Peru illustrates the displacement of crops by climate change. Credit: Milagros Salazar/IPS

PUERTO MALDONADO, Peru, Dec 27 2012 (IPS) - “When someone in Peru sneezes, someone in Brazil catches a cold. When a barrel of oil is produced in Ecuador, a neighbouring country ends up buying it,” says prominent environmentalist Yolanda Kakabadse.

Everything that happens in Latin American countries is closely connected, as if they were vital organs shared by the same body, maintains Kakabadse, former environment minister of Ecuador and current regional director for Latin America and the Caribbean of the Climate and Development Knowledge Network (CDKN).

This is why the CDKN is promoting an initiative that will allow Brazil, Colombia, Peru, Ecuador and Bolivia to exchange and assess evidence-based information on the risks, impacts and threats of climate change shared by the countries of the Amazon region.

The aim is not only to measure impacts that are already evident, but also to foresee damages in the medium to long term. What will be the implications for the lives of the most vulnerable people if global temperatures increase two degrees by 2025? This is the kind of questions that need to be asked, explained Carolina Navarrete of the International Center for Tropical Agriculture (CIAT), which is also supporting the initiative.

For example, Navarrete told Tierramérica*, “a two-degree increase in temperature could make it necessary to move coffee crops up 300 meters higher, and the same thing would happen with other crops. How can we prepare for this situation without causing pressure on sensitive areas, such as protected natural areas, for example?”

The goal of the project is help the region’s authorities respond to these crucial questions for the population’s survival with concrete actions, Kakabadse and Navarrete told journalists from the five countries gathered in Puerto Maldonado, the capital of the Peruvian Amazonian region of Madre de Dios.

Kakabadse announced that Peruvian Environment Minister Manuel Pulgar Vidal would be responsible for convening his counterparts, between the months of January and February, in order to jointly define measures to be adopted. It is hoped that a formal agreement will then be reached by April or May.

But the Ministry of Environment has yet to make an official statement in this regard, as it is still “working with other sectors and agencies involved in environmental affairs,” according to a communiqué received by Tierramérica at press time.

Nevertheless, as Kakabadse stressed to Tierramérica, the initiative must reach beyond the particular governments in power at a given moment, because “there is a great deal that needs to be done in the medium and long term.”

As a first step, a scientific working group has just completed a preliminary report that reveals the vulnerability of the Amazon region in a scenario of climate change.

For the report, coordinated by the Global Canopy Programme and CIAT and financed by the CDKN, the team of specialists reviewed more than 500 publications from the last 15 years and consulted websites and databases on deforestation and hydrologic modeling.

The report places emphasis on the threats to water, food and energy resources and how they are interrelated. Without water security in the region, there can be no food, energy and health security, it stresses.

The greatest impact will be on water quality, due to deforestation, energy extraction, mining and the use of fertilizers, among other activities that threaten the rainforest and its natural wealth, says the report.

In the last decade, the Amazon region suffered two unprecedented droughts in 2005 and 2010, while floods wiped out thousands of hectares of crops. According to the UK-based Met Office Hadley Centre for climate change research, extreme events like these will intensify and could occur every two years by 2025.

Under this scenario, competition for water will increase. The most powerful users will likely have greater control over this vital resource, while local populations, almost always the poorest, will have access to water of lesser quality and in smaller quantities, warns the report.

Energy generation also depends to a large extent on the Amazon. In Peru, the rainforest accounts for 73 percent of total oil and natural gas production. Hydroelectric plants in the Amazon provide over a third of electricity in Ecuador and Bolivia.

Meanwhile, the appetite for the large proven reserves of crude oil in the Amazon is exerting pressure on the protection of fragile ecosystems in a context where hydroelectricity generation could be compromised by changes in the flow of rivers.

In the Brazilian Amazon region, the total hydroelectricity potential is estimated at 116 gigawatts (GW), of which only 16 GW is currently exploited. Of the rest of this potential, 25 percent would affect indigenous territories, while 16 percent is located in protected natural areas, notes the report.

At the same time, there are growing exports of foods supplied by the Amazon rainforest – a region in which, paradoxically, one out of every three inhabitants suffers from hunger.

The appearance of vectors of diseases in areas where they were previously unimaginable – such as malaria, a hot-climate disease, in the cold environs of Lake Titicaca – also demands that the problem of climate change be confronted by the region’s countries as a bloc, say the experts.

All of these impacts and projections demonstrate that “long-term planning is as important as risk management in the present,” said Navarrete.

Kakabadse, for her part, stressed that no matter what, it is crucial not to lose sight of the enormous importance of the conservation of the Amazon and its protected natural areas. They are the “savings account” that must be preserved for the even more difficult times ahead, she said.