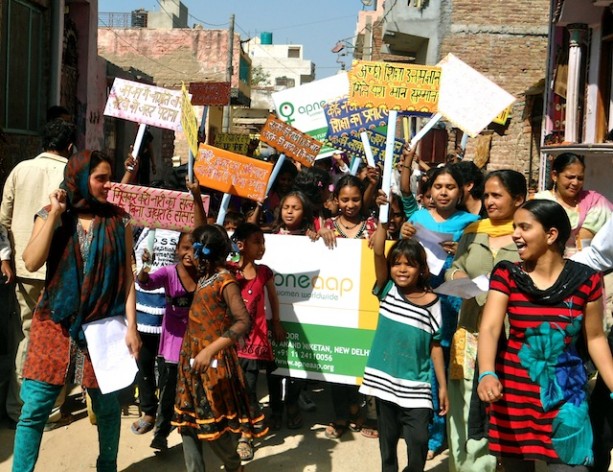 KOLKATA, Dec 21 2012 (IPS) - In a small dingy room on the edge of a brothel in west Kolkata, capital of the eastern Indian state of West Bengal, a 42-year-old former sex worker is trying to eke out a living selling cooked food in her neighbourhood, while tending to her sick husband and a paralysed son.

Despite the hardships of everyday life, Rubiya Bibi (not her real name), who was trafficked to India from neighbouring Bangladesh when she was a teenager, knows one thing for sure – she does not want to go back to prostitution.

Recalling the days when pimps and madams would force her to sleep with men even when she was sick, Rubiya Bibi says: “Poverty forced me to prostitution. But once in the trade’s vicious cycle, I faced even more atrocities.

“I was never allowed to say ‘no’ to those who ran the brothels. I was only 18 when I (tried) to escape but was caught and tortured,” she told IPS.

“I am now trying to live a life by other means though it is very difficult since my son is both physically and mentally challenged and my husband is also ill.”

In India, girls form the majority of the country’s 1.2 million child prostitutes, according to the Central Bureau of Investigation (CBI), India’s leading federal investigation agency.

Though no exact data is available, government officials and NGOs have tentatively placed the number of sex workers in India at about three million.

In addition, the U.S. State Department says India is a source, destination, and transit country for men, women, and children subjected to forced labour and sex trafficking.

In an effort to raise awareness about prostitution, Rubiya Bibi is now working with an ongoing anti-prostitution and anti-trafficking campaign, called ‘Cool Men Don’t Buy Sex’.

Spearheaded by the anti-trafficking NGO Apne Aap (meaning ‘on our own’), sex workers, trafficked women and students of Indian colleges and universities, the campaign brought under one umbrella women like Rubiya, sex workers’ children and young people from prominent educational institutions, in an effort to reach as broad of a spectrum of the public as possible.

Celebrities have also shown their support by endorsing the campaign.

The idea for ‘Cool Men Don’t Buy Sex’ first came from students of Symbiosis College in Pune, a city in the western Indian state of Maharashtra, earlier this year, but the campaign really started to gain momentum this December with the collection of thousands of signatures on a petition calling for a change in laws regulating the sex trade.

The students who started the project wanted to take a stand against the idea that women can be bought and sold, while simultaneously putting pressure on the Indian government to punish pimps and johns instead of stigmatising the victims and survivors of the sex trade.

The campaign has spread to various campuses across the country. Anuja Bhojnagarwala, a third-year student in the human development department at the J D Birla Institute in Kolkata, feels strongly about the issue and invited Apne Aap members on to campus to educate her fellow students.

“I wanted people to learn about the reality of sex trafficking and prostitution,” she told IPS.

“I know that it will not be easy to abolish prostitution, and it cannot happen until women can be offered (an alternative) livelihood,” she added.

“It criminalises and stigmatises trafficking victims and allows the true perpetrators of crime – traffickers, pimps, johns – to exploit women and children with impunity,” Gupta said.

Earlier this month, Apne Aap presented President Pranab Mukherjee with more than 10,000 signatures on a petition calling for amendment of the existing anti-trafficking law that would deter the purchase of sex by increasing punishments for buyers and traffickers, and protect the women and girls that fall victim to the industry.

According to Apne Aap, the Cool Men Don’t Buy Sex Campaign shifts the focus away from victims and highlights the force that fuels the trade itself – the male demand for sex – without which traffickers, pimps, and brothel owners will be driven out of business, activists say.

“We (also) recently got a letter from the ministry of women and child development to say that the our suggestions would be taken on board,” Gupta told IPS, adding that this brings the movement closer to its goal of securing both societal and legislative change.

“Cool Men Don’t Buy Sex enlists both men and women to put pressure on the Indian government for the amendment of the proposed Section 5C of the ITPA (that seeks to punish clients found in brothels). This amendment will shift the burden of criminalisation from women and girls in prostitution to the men who buy sex and the pimps who profit from violent exploitation,” she added.

However, India’s largest sex workers’ body, which is also opposed to certain aspects of the ITPA that have failed to prevent harassment of sex workers, does not see eye to eye with the demands of organisations like Apne Aap.

“Those who are spearheading this campaign do not (seem to understand) that criminalising the buyers of sex will be an attack on the livelihood of sex workers,” according to Bharati Dey, secretary of the Durbar Mahila Samanwaya Committee (DMSC) – a collective comprised of 65,000 female, male and transgender sex workers based in West Bengal.

“We are against trafficking of minor girls too. Since 2000 we have rescued 941 girls who were being forced into the profession. We did this through our self-regulatory board,” Dey told IPS. “But if you get rid of brothels, you cannot fight HIV/AIDS like we did by spreading awareness in the brothels of Kolkata.”

Indeed, DMSC’s method of HIV/AIDS prevention has served as a model for other major global health organisations, including the Bill and Melinda Gates Foundation.

Back in the 1990s, the sex worker collective taught its members how to resist attempts to force unprotected sex on them. By 1998, after a long battle, condom use reached 90 percent, an unprecedented increase from just three percent in 1992.

Dey stressed that if brothels are banned, underground sex work will thrive, with more people affected by sexually transmitted diseases.