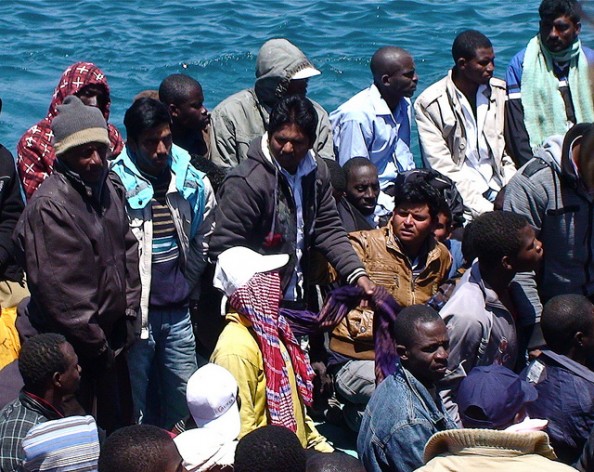 UNITED NATIONS, Dec 13 2012 (IPS) - The United Nations will commemorate its annual International Migrants Day next week amidst reports of a rising tide of anti-migrant sentiments – primarily in Europe.

The dramatic increase in hatred towards migrants has been triggered by several factors, including the economic crisis in Europe, the spread of Islamophobia, and more importantly, the vociferous emergence of rightwing political parties in several countries, including Finland, Greece, Spain, Germany, Switzerland, UK, Norway, Denmark, France, Italy, Sweden and the Netherlands.

Despite the key role played by migrants and migrant earnings in long-term economic development, the United Nations has continued to sidestep a long-outstanding proposal for an international conference on migration dating back to a 1993 General Assembly resolution.

The conference remains grounded primarily due to opposition by Western nations.

“A conference would likely limit their sovereignty over matters relating to international migration,” he said.

As a result, he said, the United Nations is unlikely to convene a global, intergovernmental conference on international migration in the foreseeable future.

Instead, said Chamie, the United Nations “will continue to resort to high-level dialogues that are voluntary, non-binding global forums to address international migration.”

“There will be no U.N. global conference on international migration for the foreseeable future,” he predicted.

Additionally, the Italian Northern League, the Irish National Party
the Swedish Democrats Party, the Norwegian Progress Party, the Austrian Freedom Party, the Swiss People’s Party, the Australian First Party, the True Finns Party and the Tea Party in the United States are all categorised either as strongly right-wing or blatantly anti-immigrant.

The 193-member U.N. General Assembly (UNGA) is scheduled to host a high-level dialogue (HLD) on international migration and development sometime next year, the last one being held in 2006.

Jean-Philippe Chauzy, head of media and communication at the International Organisation for Migration (IOM), told IPS his Geneva-based organisation believes the 2013 dialogue presents the international community with a unique opportunity to mainstream migration into development frameworks at national, regional and global levels.

“It’s also a unique opportunity to advocate for the protection and promotion of the human rights of all migrants, including undocumented, stranded or otherwise vulnerable migrants,” he said.
More generally, Chauzy pointed out, a 2011 UNGA resolution invites IOM to participate in the preparations for and proceedings of the second HLD.

He said IOM has also been invited to support regional preparations for the HLD in cooperation with the U.N. Regional Commissions and other relevant entities.

Asked about the anti-migrant sentiments, Chauzy told IPS IOM has been calling for a fundamental shift in public perceptions of migrants.

This was the focus of the 2011 ‘World Migration Report Communicating Effectively about Migration’.

On a programmatic level, he noted, “we continue to launch information campaigns to promote better understanding of migration and of the contributions of migrants to societies, most recently in South Africa with the ‘I am a Migrant Too’ campaign”.

He also singled out PLURAL+, a joint initiative between IOM and the U.N. Alliance of Civilizations (UNAoC) as another example of “how we strive to get young people to document their migration and integration experiences through short films”.

Chamie of the Centre for Migration Studies told IPS the issue of migration has also become timely with the focus on economic uncertainty, in particular the U.S. “fiscal cliff” and economic problems of the European Union.

“While governments and institutions try to grapple with economic uncertainty, an important factor of relative certainty often overlooked is demography,” he said.

He said neither political rhetoric nor wishful thinking can dispel the enormous impacts of demography, especially relevant to international migration.

“As a result of differences in population growth and age-structures, as well as in living standards between the more and less developed countries, powerful push-pull factors will continue to produce large streams of international migrants.”

In a statement released to coincide with International Migrants Day Dec. 18, IOM said the evacuation of more than 200,000 migrant workers from Libya in 2011 focused world attention on the plight of tens of thousands of migrant workers.

They were mainly from low-income, developing countries, who found themselves swept up by the political upheaval, without money, jobs, documentation or any means of getting home to their families.

Their marginal status in Libya and obvious vulnerability touched a chord with international donors who stepped in to help agencies including IOM and the Office of the U.N. High Commissioner for Refugees (UNHCR) to mount a massive repatriation operation.

They included the World Bank, which funded a 10-million-dollar IOM airlift of 35,000 migrants to Bangladesh.

The crisis highlighted the fact that conflicts and manmade or natural disasters can also impact already vulnerable migrants, resulting in humanitarian crises.

These partnerships include between international organisations, member states and a variety of non-state actors, including non-governmental organisations (NGOs), the media, the private sector, religious groups and transnational diaspora communities.

“We all share a responsibility to protect the human rights of all people on the move,” Swing said.