PORT OF SPAIN, Trinidad, Dec 7 2012 (IPS) - For 21 days Wayne Kublalsingh sat in the scorching sun outside the office of Prime Minister Kamla Persad Bissessar. He sat in support of his belief that constructing a highway in southern Trinidad would damage the environment and affect hundreds of lives in the surrounding area.

On Wednesday night, Kublalsingh, an Oxford graduate and lecturer at the University of the West Indies (UWI), called off his strike as his weight plunged dramatically and the government continued to insist that the 45-kilometre highway, expected to be completed within four years, would be constructed. But the 53-year old environmentalist ended his strike only after being assured that a deal had been brokered to take into account the environmental concerns raised by his Highway Re-route Movement (HRM). 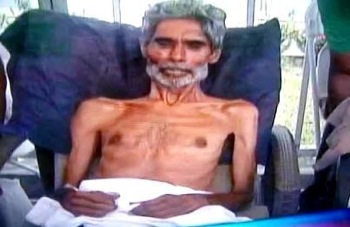 For 21 days, Wayne Kublalsingh did not eat or drink in protest against the construction of a highway in southern Trinidad. Credit: Peter Richards/IPS

Kublalsingh and the HRM have argued that the construction of the 1.1-billion-dollar highway would destroy not only more than 300 homes and 65 oil wells, but also over a dozen communities as well as places of worship. The Oropouche lagoon, a 56-square-kilometre mangrove known for its rich biodiversity, rare butterflies and birds, would be destroyed as well.

“It is going to compromise the agriculture future of the lagoon and it is going to create an embankment and create permanent flooding,” Kublalsingh told IPS. The HRM added that if the present design from Point Fortin to San Fernando is maintained, thousands of acres of fertile lands will also be destroyed.

On Wednesday, the powerful Oilfield Workers Trade Union (OWTU) led a demonstration against plans to cap the 65 oil wells, claiming that no dialogue had been held with relevant stakeholders.

OWTU President General Ancil Roget told IPS that the government is claiming that the wells are no longer productive. Roget, however, countered, “We need to get a report of the potential of those wells and…determine what’s the viability to close off those wells.”

“At the end of the day it will be the oil revenue that will pay for any development and if you cap off wells you will be capping off oil revenue,” he added.

The power of protest

“I feel an enormous gratitude to the people of Trinidad and Tobago,” Kublalsingh told IPS soon after he announced that he had called off his strike. He also said that he was “feeling extraordinarily weak” and needed to see doctors and get blood tests. During his hunger strike, doctors had warned of “multiple organ failure” and at times described Kublalsingh’s health as on a “precipice”.

The deal to end the hunger strike was brokered by the Joint Consultative Council for the Construction Industry (JCC), the Federation of Independent Trade Unions and Nongovernmental Organisations (FITUN), Women Working for Social Progress and the Trinidad and Tobago Transparency Institute (TTTI).

On Monday, following a four-hour round of talks, they reached an agreement on Monday allowing for the appointment of an independent working group to examine concerns raised within a 60-day period.

The agreement included a review of all documentation from state agencies and an invitation to interested parties for written or oral submissions. An assessment will be conducted of the “implications for social, economic and environmental impacts of the highway development”.

JCC president Afra Raymond said as a result of the accord, civil society groups invited Kublalsingh to end his hunger strike “so that we can have his submissions and active participation in this important matter”.

“This is a real advance in the development of our country,” he added, “so we would like all parties to work in good faith within this process.”

But the project and Kublalsingh’s strike have divided both the government and the country.

Foreign Affairs Minister Winston Dookeran called on Prime Minister Persad Bissessar to meet with the environmentalist. He said that while there are both positive and negative aspects of the highway’s construction, the nation should recognise Kublalsingh’s actions.

“Whether right or wrong, (it) stems from a deep conviction of a case for which he seems prepared to die. As a government, we must understand that such a fast emanates from deep spirituality and as such represents the soul of human endeavour,” Dookeran said.

But the national security minister, Austin Jack Warner, was not impressed.

“If some people choose to fast over ten miles of highway and if they believe life is worth ten miles of a highway, then go ahead,” he said, urging the environmentalist to hurry up kill himself “quickly”.

Persad Bissessar, the prime minister, said she would not allow a “few people determine what is good for 300,000 people”.

“My compassion, as painful as it may be, must be going to making the decisions for the benefit of the greater majority of our citizens,” she said in justifying her decision to construct a highway that “would open the south to development”.

But a Roman Catholic priest, Father Clive Harvey, who had been at Kublalsingh’s side during his 21-day vigil, said the issue extends beyond development. He said the environmentalist’s action had been for “transparency and truth and to be able to be able to restore some level of trust to governance in the country”.

Michael Theodore of the Council of Legal Education, in a letter published in the local media, said “whatever the merits of the highway may be, we are now confronting the issue of how we as a people deal with persons who challenge the status quo, who buck the system with a passion and commitment that few of us possess or for which we are prepared to die.

“Dr. Kublalsingh also represents those of us who aspire to hold an independent view or seek to improve our environment, society and even the organisations in which we work. We are often targeted, vilified and ridiculed when those views call for change and challenge the status quo,” he wrote.

But prominent criminal attorney Israel Khan said that Kublalsingh should have been arrested on attempted suicide charges. “It appears that Kublalsingh has a death wish and the DPP (director of public prosecution) must not abdicate his responsibility by ignoring the commission of a criminal offence,” he added.