PORT-OF-SPAIN, Trinidad, Jul 13 2012 (IPS) - Ordinarily they live for at least half a century. But at least 20,000 leatherback sea turtle hatchlings never made it past their nesting ground at Grand Riviere, a stretch of shoreline along Trinidad’s north coast, in what’s been described as “an engineering disaster” last weekend.

Instead, the hatchlings and eggs were destroyed by heavy duty earth-moving equipment brought in by authorities to halt erosion and save homes and businesses in the area. The erosion was being caused by the Grand Riviere River, which authorities said started meandering away from its natural course last December.

“The remedial work was deemed an emergency due to the drastic and sudden erosion that had taken place in an extremely short space of time,” the Ministry of the Environment and Water Resources said in a statement. 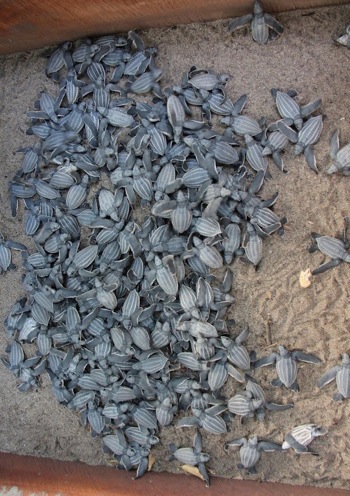 The erosion was endangering “several buildings, including a hotel (that) is one of the most popular tourist accommodations during the turtle nesting season”. “The Ministry remains concerned about the welfare of the turtle nesting site and the sea creatures that make their home on that space,” the statement added.

The government department said it was unfortunate that in its efforts to halt the degradation of the area, some of the eggs and hatchlings there were negatively affected.

But Planning Minister Dr. Bhoe Tewarie said the actions that led to the death of the endangered leatherback turtle hatchlings should not be excused.

“The people who operated the equipment in there and the company that operated it….should be held to account,” Tewarie said, adding that “the government as a whole needs to address the issue of the incompatibility of policy issues which emerge”.

“The ministries need also to align their strategies and their actions to the policy framework within which the government is operating. And there is no deviation from the fact that the policy framework is sustainable development, and we need to get in line and get on board with that issue,” he added.

“The impact is not as severe as has been claimed”

But Dr. Joth Singh, the chief executive officer of the Environmental Management Agency (EMA), said that while he regretted the tragedy, the remedial work would ultimately save many more eggs and hatchlings, as the river would have washed away parts of the beach that were more nest intensive.

“The intervention was imperative, if not, there would have been significant impact on the nesting areas left and the season is still ongoing. The fact is that the impact is not as severe as has been claimed and circumstances were created where the authorities were made to appear to have been negligent,” he said.

Newly appointed Environment Minister Ganga Singh said that it is not in the “DNA” of Trinidad and Tobago to destroy the nesting grounds of the turtles and that the works were not carried about arbitrarily but after proper consultation.

He insists that the best interests of the community had to be considered.

But Sherwin Reyz of the Grande Riviere Environmental Organisation said that the dredging was unnecessary.

“This is the part of the beach (with) the most nests…thousands of eggs and hatchlings were lost,” Reyz said, adding, “we all agree that the work had to be done but we believe they did not have to dig up the whole beach”.

Calling for an investigation

In a swift response to the tragedy, Nalini Dial, chair of the non-governmental organisation (NGO) Animals Are Humans Too, called on Prime Minister Kamla Persad-Bissessar to launch a full investigation into the incident.

Dial said her organisation was “aghast and distressed at the mindless, needless, callous killing of hundreds of baby turtle hatchlings” and that the killings were yet another demonstration of the lack of concern the four-party coalition People’s Partnership government and the Environmental Management Authority (EMA) show to the voiceless people.

Like Tewarie, Dial said the perpetrators should be held accountable, noting that the leatherback turtles are an endangered species “and anyone found guilty of harming them should be punishable by law”.

Grande Riviere is Trinidad’s most nest-intensive beach during the laying season of sea turtles, including the critically endangered leatherback, and is the third most prolific site in the world. The nesting season runs from May to September every year.

In May of this year, the EMA held a Sea Turtle Convention, to bring focus to the protection of these critically endangered marine animals. Leatherbacks, the largest sea turtle, can grow to almost 10 feet and weigh 800 pounds.

All turtles are regarded as critically endangered worldwide, according to the Convention on International Trade in Endangered Species of Fauna and Flora (CITES), to which Trinidad and Tobago is a signatory.

Tragic, but not devastating

One Caribbean turtle conservationist said the destruction at Grande Riviere would not significantly affect the reproductive output of the nesting ground and would not accelerate the decline of the species.

Len Peters, head of Turtle Village Trust said that although the destruction was unfortunate, much of the nesting area had already been lost to the river.

“We would have lost more nesting space eventually. We didn’t lose a lot of eggs, although this is an engineering disaster,” he said.

The executive director of the Wider Caribbean Sea Turtle Conservation Network, Karen Eckert, agreed that the incident will not significantly affect the reproductive output of the beach “and certainly will not accelerate the global decline of leatherback sea turtles”.