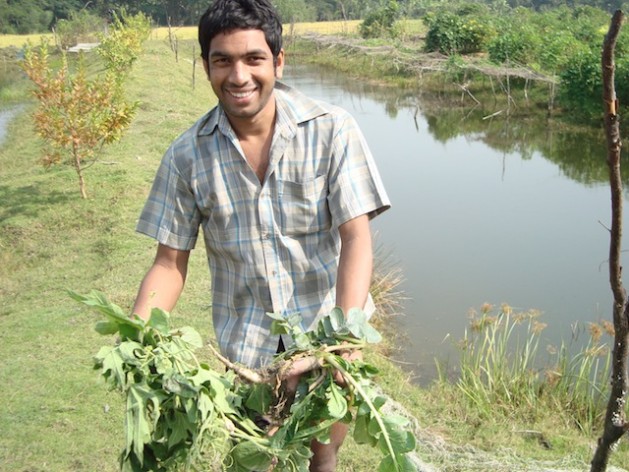 BARGUNA, Bangladesh , Dec 21 2012 (IPS) - Scientists predict that in the coming years, Bangladesh will be battered by even more climate disasters than it has already endured. Global warming has caused devastating damage in this lower Himalayan delta country of 150 million people, where seawater intrusion, increasingly intense cyclones, dried up rivers and extreme weather events have become the norm.

Crop production is said to have declined by 30 percent and if seawater inundation continues at its current rate, 16 percent of the country’s coastal areas will be underwater by 2050.

It is also estimated that by 2050 some 18.5 million inhabitants of coastal Bangladesh will face hunger, homelessness and poverty as a result of climate change.

Despite the urgent need to reduce carbon emissions, widely recognised as the leading cause of global warming, industrialised nations have been unmoved.

As the recent United Nations climate summit in Doha, Qatar, made clear, appeals and tragedies have not been sufficient to prompt binding agreements on emissions cuts.

But faced with the threat of a massive humanitarian and ecological crisis in the coming decades, the government of Bangladesh is no longer willing to remain silent.

Since 2009 it has poured 350 million dollars into projects to address climate change, including devising better adaptation and mitigation models.

Community-based adaptation to climate change through coastal afforestation is one such model that has attracted global attention for its unique approach to adaptation and sustainability and is now being practiced in Bangladesh.

What started off as a pilot project in 2009 has now provided some 80 landless families in the coastal Sonatola village in the southwestern Barguna district with state-owned fallow land on which to cultivate fruit and vegetables, grow timber trees and rear fish.

Located about 480 kilometres from the capital Dhaka, this district was chosen for its past experiences of being hit by both Aila and Sidr, two of this century’s deadliest cyclones. 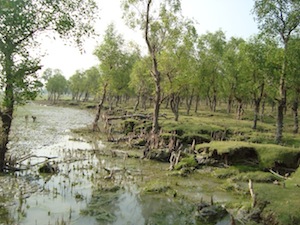 A mangrove forest planted along the seashore to protect coastal communities from flooding, cyclones and storms. Credit: Naimul Haq/IPS

Along with growing fruits and cultivating fish for livelihood purposes, the project also included planting wild mangrove forests, locally known as golpata and kewra, to protect the coastal communities from cyclones.

The government also erected an embankment along the coastline to prevent seawater intrusion and shelter inhabitants from storms, surges and wind.

Each of the beneficiaries received about 23 decimals of land (about 1o,000 square feet) for the purpose of excavating a deep ditch and constructing a dike alongside it to confine the water.

Locals call it the ‘ditch and dike project’, though its official name is ‘Forest, Fruit, Fish’ or the ‘Triple F’ model.

Peasants planted fruit and timber trees along the embankment and released fish, including several carp varieties, into the ditches that lie parallel to each other.

Benefits to the community

The Triple F model has been a godsend for the once impoverished community.

The soil in Naltola, an area comprising a cluster of small villages from which many of the project’s beneficiaries hailed, had become too salty for growing crops, with soil quality worsening at an alarming pace, according to numerous scientists.

Local coastal farmers told IPS that, until the project began, their main source of livelihood had been disappearing fast, as they had been forced to give up growing crops. 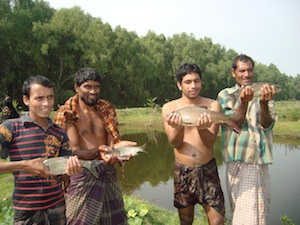 Beneficiaries of the “dike and ditch” project hold up their fish catch. Credit: Naimul Haq/IPS

“Local fish stocks were also depleting due to high salinity. So the ‘ditch and dike project’ has really come to our rescue,” Shajahan Mallik, a 53-year-old former fisherman, who heads a committee of the new landowners, told IPS.

Twenty-three-year-old Mohammad Jamal Hossain, another of the project’s beneficiaries, told IPS he recently earned about 125 dollars selling four types of carp species in Naltola bazaar, a small fishing and farming village just four kilometres from the Bay of Bengal.

“I had virtually no income before this project but now I earn a regular income selling vegetables like cabbage, gourd, peas, beans, spinach and radish. Fish is in high demand here, and the big varieties I catch fetch good prices,” said Jamal, who lives with his mother and sisters.

Jamal’s neighbours made similar fortunes growing vegetables and cultivating fish. The fruit trees are not yet matured so the beneficiaries may have to wait another two years before they can start selling fruits.

Masuda Begum (33), one of the poorest women in the village, said, “I earned about 150 dollars last summer from the sale of fish and vegetables.”

Masuda’s neighbour Rahima (35) told IPS, “When I need to buy something I don’t have to worry about cash. I ask my son to catch fish and trade them for necessary commodities in the market.”

In fact, many of the families have stopped shopping for daily essentials except for some spices and rice, since fresh vegetables and fish are now plentiful. The trees also provide enough dry leaves and twigs for fires.

Some families have even bought ducks and released them into the fresh water ditches, hoping that the birds’ eggs bring even more profitability. This innovation bodes well for the project’s sustainability.

Observing the project’s success from afar, thousands of landless farmers in the surrounding villages have appealed for similar allocations of land on which to cultivate sustainable livelihoods.

“We are preparing a proposal for expanding the programme,” Mohammad Abdul Wahhab Bhuiyan, deputy commissioner of the Barguna district, told IPS, adding that the only way to cope with the enourmous number of requests is to replicate the project in the most vulnerable communities across Bangladesh.

Aparup Chowdhury, additional secretary of the ministry of environment and forests, told IPS, “The project has already received international recognition thanks to our State Minister for Environment and Forests, Dr. Hasan Mahmud, who has been an enthusiastic supporter all the way through.”

“We are now planning to take the lessons from Barguna to other coastal districts like Noakhali, Cox’s Bazar, Bagerhat, Bhola and Khulna, which would greatly help thousands of farmers there,” Chowdhury added.

This past April, the Triple F model received the renowned international ‘Earth Care’ award in recognition of its mitigation and adaptation efforts.