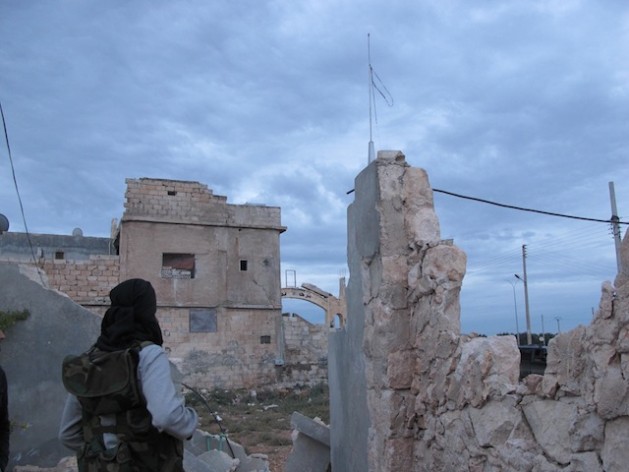 SARMEEN, Syria, Dec 3 2012 (IPS) - As the death toll in Syria tops 40,000 and some 400,000 have taken refuge beyond the country’s borders, a dearth of funding for civilian projects in areas under Free Syrian control risks undermining efforts to keep inhabitants united and the limited lines of communication flowing.

A number of young Syrian activist groups travel between Istanbul and cities under Free Syrian Army (FSA) control to set up local administration councils, racing to provide essential services to the population before another winter arrives amid scant electricity, dwindling access to basic necessities and continued shelling of civilian areas. The groups coordinate with medical workers in the border area and FSA members, and maintain regular contact with embassies, individual donors and local populations.

Abdullah Labwani, 27-year-old nephew of well-known dissident and physician Kamal Labwani works with the Istanbul-based NGO Civil Administration Councils (CAC). In “another life”, as he called the period leading up to the revolution, he worked as an architect and taught at the University of Damascus.

From Istanbul he maintains contact with those inside Syria while trying to convince Western diplomatic representatives to send funds for medical, communications and food needs as managed by the councils.

This IPS correspondent travelled with Labwani to Sarmeen in the northwestern Syrian province Idlib in early November. With just over 20,000 inhabitants before the uprising, several thousand had fled the town amid continuing conflict in the area.

In March of this year, some 318 houses, 87 shops and numerous warehouses, pharmacies and mosques were destroyed in attacks by Syrian government forces on the town.

Human Rights Watch found that regime troops had killed at least 95 civilians, many by summary execution, in the assault on the eastern and southern parts of the province. Three brothers from Sarmeen’s Hajj Hussein family, for example, were taken out of their home, had their hands tied behind their backs and were killed and burned in front of their mother as a “lesson” to the town’s inhabitants.

Sarmeen has been under Free Syrian Army control since late March, but regime shelling near the town can be heard frequently. In the days spent there, helicopters were spotted flying overheard a number of times. The regime has reportedly engaged in extensive dropping of barrel bombs and cluster munitions on towns in the province.

Residents use flashlights, candles, oil lamps and generators, and are fortunate to get an hour or two of power a day – an hour when everyone hastens to turn on television sets to see the news and to recharge phone batteries.

To the background noise of generators whirling, a meeting was held on my first night there in the basement of a building by the members of the community selected to form the council.

The 20 to 25 local men who took part were enthusiastic over the possibility voiced by Labwani of sending some of them to Istanbul for training courses if CAC manages to raise funding. Sugary tea and Turkish-produced cola drinks were brought round whenever attention started to wane.

A few wore the traditional red and white keffiyeh, and an imam and a doctor were in long flowing robes, but most of those in their twenties sported jeans and the older men were dressed in more formal Western-style trousers and shirts. The ruddier, worn expressions of those with walkie-talkies by their sides marked those among them most heavily involved in the FSA.

The major point of contention was whether or not FSA members could be included in such initiatives and their role in the civil administration, as embassies potentially willing to put up the funds require a clear distinction between helping civilian initiatives and aiding military ones. FSA commanders feel they deserve the right to positions of authority in the town administration.

In the following days this correspondent visited the nearby village Ta’um, not far from the military base in Taftanaz. Of some 7,000 inhabitants before the conflict, less than 2,000 are said to remain.

Mostly only FSA members have chosen to stay on in this village filled with rubble, the remains of exploded and unexploded ordnance, and a few stray cats. It continues to be bombed, as do approximately 60 to 200 other towns across Syria every day.

FSA fighters repeatedly call for more weapons, and claim that if they get them soon enough they could “prevent the need for large amounts of food aid and other assistance,” one of them, Abu Yassir, told IPS.

Given the fallout resulting from funneling weapons to non-state actors in recent decades, though, it is unlikely that arms will be supplied in any substantial amounts directly to the FSA by Western nations unless the Syrian National Coalition receives recognition as a government in exile, and until the FSA is seen as being under its command structure.

Whether those doing the fighting will be willing to relinquish control to those who are not remains to be seen. That said, with the exception of the commanders, all of the FSA members IPS spoke to had other hopes for the future – to return to their studies, to open a business, or attend a military academy “to get some real training”, as the fighter and former university student Abu Yahia put it.

In the meantime, civil administration councils seem one of the few ways to keep communities organised, make sure outside funding goes towards providing essential services, and establish a structured channel for communication and coordination between those inside and those outside the conflict area. (End)