Gangs Back Plan for Violence-Free Districts in El Salvador 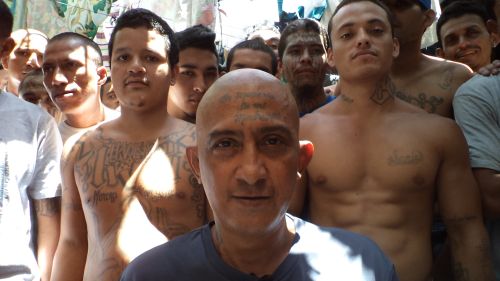 Carlos Mojica, surrounded by other gang members: “We want to eradicate all illegal activities.”

SAN SALVADOR, Dec 26 2012 (IPS) - Salvadoran youth gang leaders have accepted a proposal to declare 10 municipalities free of violence – a bold plan that has run up against the mistrust of vast segments of society with regard to the gangs and their aim of reinsertion in society.

“We want to eradicate all illegal activities and have a better relationship with the community,” Carlos Mojica, alias “El Viejo Lin”, the leader of one of the two factions of the Barrio 18 gang, told IPS.

The initiative launched by the mediators of the peace process between the gangs and the government, former guerrilla fighter Raúl Mijango and Catholic bishop Fabio Colindres, was publicly accepted on Dec. 4 by the heads of the Barrio 18 and Mara Salvatrucha (MS-13), the two main gangs in El Salvador, and later by smaller groups like Máquina, Mao Mao and Mirada Locos, according to a communique.

According to official estimates, at least 60,000 young people in this country belong to gangs or “maras”, as they are known in Central America, which many of them join due to the lack of educational and employment opportunities in their slum neighbourhoods.

In this country of 6.2 million people, unemployment stands at 10.7 percent among young people between the ages of 16 and 29 – 6.1 percentage points higher than the rate among economically active people over 30.

The weight of the maras in organised crime has grown to the point that the U.S. Treasury Department officially designated the MS-13 a transnational criminal organisation.

Under the new peace initiative, the members of the maras promised not to commit crimes in 10 violence-ridden municipalities, and to hand their guns over to the authorities to prove that their intentions are sincere.

Once crime rates go down in the 10 districts in question, the idea would be to expand the plan to other cities, and eventually, nationwide.

Neither the mediators in the talks nor the gang leaders have revealed to the press the names of the 10 municipalities, apparently to avoid putting media pressure on the local authorities in those districts.

“We want to gradually put an end to some things, but it can’t be done on a large scale, because others parts of society aren’t ready to do it yet,” Borromeo Henríquez, alias “El Diablito de Hollywood”, one of the heads of the Mara Salvatrucha, told IPS.

Under the plan, the gangs would work with non-governmental organisations, churches, the centre-left government of Mauricio Funes, and local mayors, to create the conditions necessary for the social reinsertion of gang members.

The truce declared by the gangs in March has reduced the number of murders in El Salvador, one of the world’s most violent countries. Official statistics indicate that homicides have gone down from an average of 12 a day to five or six a day.

But extortion, one of the maras’ main sources of income, continues.

The creation of violence-free municipalities would mean an end to the extortion rackets and other criminal activity.

The plan would include labour reinsertion projects to make it possible for young gang members to earn an income without committing crimes.

“The damage we have done to our communities is terrible – we regret it,” Henríquez said, from the La Esperanza prison north of San Salvador, where he is an inmate.

One controversial aspect of the project is the demand for the modification or repeal of the anti-gang law, passed in 2010 to combat the maras, which has brought few results, according to analysts.

The mediators, Mijango and Colindres, met Dec. 14 with legislators to discuss the need for a new law that would grant guarantees to gang members who want to rejoin society, to allow them to participate in the productive programmes that would be implemented under the plan, without the fear of being arrested.

The authorities will go after those who are wanted by the police. “We hope the anti-gang law will be repealed, because if we are willing to leave a life of crime behind, at a national level, why should we be pursued by the law?” Henríquez remarked.

Congress is expected to debate whether to repeal or suspend the anti-gang law.

Other points that have been mentioned to the lawmakers are the creation of a fund to compensate the families of victims of gang violence, and the modification of the Municipal Economic and Social Development Fund (FODES), so that 25 percent of the funds would go to production projects for gang members.

The project will also include prevention efforts to keep at-risk youngsters from falling into crime.

In the meantime, the truce still does not enjoy the support of a public that does not believe in the rehabilitation of gang members.

“We know it’s not easy for people to forgive us,” Henríquez said. “I have had a dark past, but don’t I have the right to change my life, to live differently?”

The proposal to create violence-free municipalities, like the truce between gangs, has raised more questions than answers, Sonja Wolf, a researcher with the Mexico-based Institute for Security and Democracy (INSYDE), told IPS.

One of the doubts is whether non-lethal crimes would be reduced alongside the falling homicide rate, said Wolf, who studies the problem of crime in Central America. Another is whether the root causes of the phenomenon of gangs will be addressed.

In a telephone conversation from Mexico, Wolf also said it was important to set up an independent follow-up and monitoring mechanism, to assess whether the plan is effective.

Some local authorities are already working on community projects targeting gang members, such as the one created by Salvador Ruano, the mayor of Ilopango, to the east of the capital.

In that district, gang members take part in programmes in which they have helped build roads and other infrastructure. “We have even asked them to guard the machines, and they have done so,” the mayor told a local TV station.