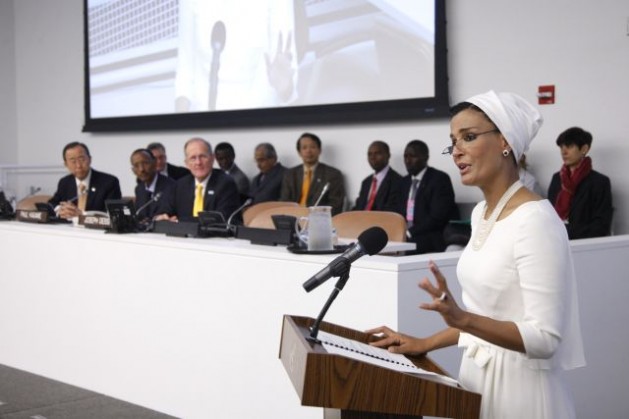 UNITED NATIONS, Dec 3 2012 (IPS) - When the U.N. Educational, Scientific and Cultural Organisation (UNESCO) launched its inaugural meeting on “Global Education for All” last month, Secretary-General Ban Ki-moon warned that most developing nations are likely to miss the 2015 deadline to achieve universal primary education.

With three years before deadline, he said, he was “worried the education target will be missed in many countries”.

Progress has been slow in many places and some countries are even regressing, he added.

“We must reverse this trend. We need greater political and financial support if we are to reach our goals,” he said.

And some of that political support came last week from the fourth annual World Innovation Summit for Education (WISE) in Doha, where Qatar’s Sheikha Moza bint Nasser launched a global initiative to deliver quality schooling to “the world’s hardest-to-reach children”, mostly in urban slums, disaster-prone regions and conflict zones.

Labelled “Educate a Child” (EAC), the initiative is already supporting 25 projects in countries across Africa, Asia and the Middle East, usually on a matching funding basis, involving more than 500,000 children.

Dr. Madhav Chavan, winner of the 2012 annual prize for education at the Doha summit, told IPS universal primary education needs to be seen as a critical priority from a global perspective because human capital imbalances exist around the globe and will continue to contribute to economic imbalances and threaten stability.

Therefore, financing education in the poorer economies must be solved early, he said.

Asked about the proposal for a global fund for education, Chavan said if huge military and war expenditures can be sustained in a global financial crisis, certainly a fund to provide education for an estimated 61 million needy children annually can be created.

“I suspect it will be in the range of 10-15 billion dollars per annum in additional funds,” he said. “The main problem is sustaining education in the long term, which requires each country to allocate sufficient resources to education.”

What is “sufficient”, he said, has to be decided in the local context because creating expensive but ineffective models cannot serve the purpose.

“Creating a global fund may be one answer. But while doing that we need to ask how and also how effectively such a fund will be used,” said Dr. Chavan, who in 1989 started mass-scale work for adult literacy in the slums of Mumbai as a part of the National Literacy Mission.

The achievement of universal primary education is one of the U.N.’s eight Millennium Development Goals (MDGs), which also include the reduction by 50 percent of extreme poverty and hunger by 2015.

But the U.N. secretary-general believes that education belongs at the top of the global economic and social agenda.

With 61 million children out of school – and a shortage of over six million teachers – the developing world is facing a massive crisis in education.

Speaking at the launch of “Educate A Child” in the Qatari capital, Sheikha Moza said, “Our mission is to turn attention back to the disadvantaged children of today, who could become confident adults tomorrow, able to fulfill their potential, if we just give them the opportunity.”

Right now, she said, millions of children are being robbed of their fundamental right to quality education.

These include children in war-ravaged villages in South Sudan; in overcrowded refugee camps in Yemen; in the flooded plains of Bangladesh; or in isolated or marginalised communities in Kenya.

“Right across the world, because of disaster, because of poverty, children are being denied a chance to change their destinies,” said Sheikha Moza, an advisor to Ban Ki-moon’s Steering Committee on Education First and special envoy to UNESCO’s “Basic and Higher Education”.

“We can change this, and because we can, we must,” she added.

Dr. Chavan, who was recognised for his “outstanding, world-class contribution to education”, received 500,000 dollars and a specially minted gold medal from the Qatar Foundation based in Doha.

He is a co-founder and chief executive officer of Pratham, a non-governmental organisation (NGO) that reaches three million primary school age children in India every year.

In 1994, as a result of a UNICEF initiative, Pratham was set up to address problems of universal primary education in Mumbai and has introduced several mass-scale innovations such as the Annual Status of Education Report in the area of assessment and the Read India movement which delivers education to the underprivileged.

Asked about universal primary education, Dr. Chavan told IPS that with net enrollment rates in the developed world at 97 percent, and the developing world having improved from 82 to 90 percent, it could be said that progress is not all that bad.

“The unfortunate exception is sub-Saharan Africa where issues are different and I cannot comment except to say that if we want to give all children rapid access to learning, we have to look beyond just building schools,” he said.

Even in countries that have achieved over 90 percent enrollment rates, two issues remain, he said.

First, enrollment in schools and access to books, uniforms and facilities do not translate into access to learning.

“We need to adjust the MDGs to pay attention to actual learning achievements and outcomes,” he noted.

“Indeed, providing education for people in these communities may be costlier and may require a shift in mindset even in terms of what constitutes equity and equality,” he said.

“I think the WISE Prize endorses my efforts to achieve ‘every child in school and learning well’. The raised profile helps me reach more decision makers so that MDGs can be achieved and – in the future – modified to stress the achievement of learning outcomes and access to infrastructure,” he added.