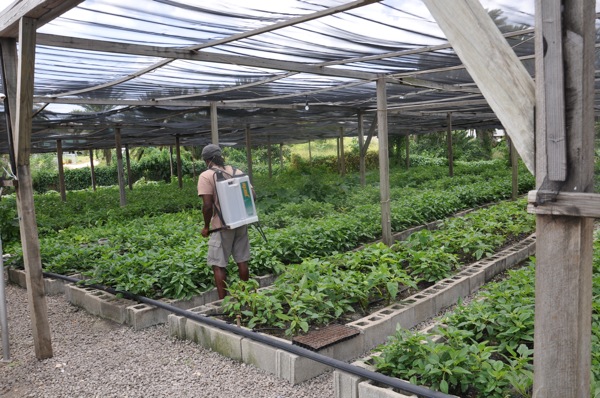 A farmer tends to vegetables in a greenhouse in Antigua, where a climate-smart agricultural initiative seeks to improve farm productivity. Credit: Desmond Brown/IPS

ST. JOHN'S, Antigua, Jan 13 2013 (IPS) - A new initiative is catching on in the Caribbean that aims to increase and sustain agricultural productivity by incorporating information about weather and climate into the farming process, all under the umbrella of climate-smart agriculture.

The Barbados-based Caribbean Agrometeorological Initiative (CAMI) has been encouraging this initiative and hopes to forecast the weather as accurately as possible so that the information can factored into decisions about agricultural production.

“We are looking at how the agrometerological services can work closely with the agricultural services in the whole area of food production,” Owolabi Elabanjo, an agriculture extension officer based in Antigua, told IPS.

“We know weather has a great impact on food production – temperature, humidity, rainfall, the amount of daylight and the amount of sunshine all have effects on various crops that we grow,” Elabanjo explained.

CAMI was designed to assist the farming community in the Caribbean by providing information about rainy season predictors and about the development of pest and disease forecasting systems to help improve decision-making on farms.

Its mandate also includes the creation of a user-friendly weather and climate information newsletter as well as forums for the farming community and agricultural extension agencies to help improve understanding of the applications of weather and climate information. The group is also supposed to obtain feedback from the farming community about products offered by meteorological services.

Indra Haraksingh, solar energy expert and University of the West Indies (UWI) lecturer, has been at the forefront of a push towards climate-smart agriculture and sustainable agriculture in the Caribbean through the use of renewable energy.

She told IPS that agriculture is the only sector that offers the triple advantage of enhanced productivity, food security and reduction in greenhouse gas emissions.

But in order to reduce the trajectory of greenhouse gases, she said, Caribbean countries must redesign their entire agricultural system. She pointed out that climate change would have an impact on agriculture through forests, livestock, food and food security.

“Why are we interested in climate-smart agriculture? The world faces one of the biggest challenges of the 21st century. It is predicted by 2050 the population will increase…by such an amount that it will be detrimental to our planet,” Haraksingh said.

“Under a changing climate and the context of growing competition for land and natural resources, feeding nine billion people is going to be a huge problem,” Haraksingh explained. “To achieve food security, agricultural production must increase by 70 percent…by 2050 if we are to feed these people; and we also have to bear in mind that we have to conserve the natural ecosystem.”

Elabanjo, who owns his own farm at Pares Village in the centre of the island, said that in 2012, farmers faced heavy rainfall that caused severe flooding and destroyed many crops on farms throughout the country.

But now, working with the agrometerological services has improved farmers’ chances for agricultural success. “Whatever food we are growing,” he said, “we now put it close to the current climate that they can be adapted to.”

“For example, this period we are in now is very good for tomato production,” Elabanjo explained. “When you grow tomatoes around this season, you get a bumper harvest.”

Antigua and Barbuda’s collaboration with CAMI has fruitful so far, with the government reporting a five percent increase in food production in 2012 compared with the previous year.

Finance Minister Harold Lovell said the sector continues to grow despite challenges presented by the weather and other factors. “The Ministry of Agriculture is committed to meeting goal number one of the Millennium Development Goals, which deals with eradicating extreme poverty and hunger,” he stated.

“This is a target that can be achieved by enhancing food security and increasing economic growth. The agriculture sector can contribute significantly to the attainment of these two outcomes.”

In terms of boosting domestic production, he said that the government, through the Ministry of Agriculture, has continued to work with crop and livestock farmers and fisher folk to increase their output for local consumption and export.

In Jamaica, meanwhile, the country has created a concept document for the Climate Change Adaptation Fund to achieve the goal of climate-smart agriculture by improving water and land management strategies in select communities, according to Roger Clarke, the country’s agriculture minister.