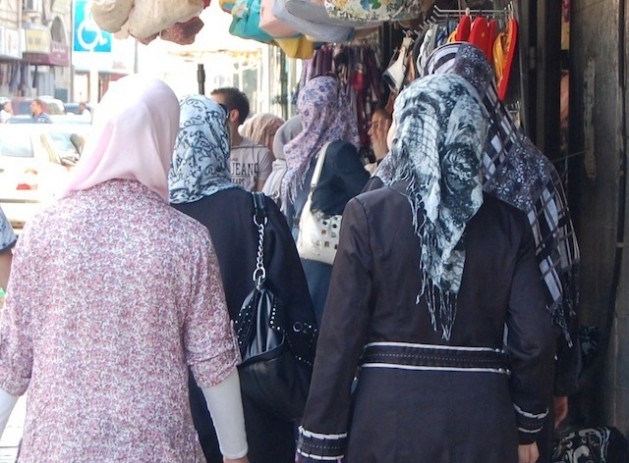 Palestinian women want to turn their backs on laws that deny them justice. Credit: Jillian Kestler-D’Amours/IPS.

RAMALLAH, Jan 22 2013 (IPS) - “Before she was murdered, she wasn’t alive. We’ll tell her story backwards from her murder to her birth”…so begins a powerful new song by critically acclaimed Palestinian hip-hop band DAM to draw attention to the continuing murder of Palestinian women by male relatives declaring that “family honour” has been damaged by alleged sexual indiscretions.

The accompanying video to the song shows a young woman’s expressionless face on a bed; her body floats back to standing position, a bullet enters her forehead. Her brother has pulled the trigger.

Across the world, the United Nations estimates that 5,000 women and girls are murdered and abused every year by male relatives as punishment for behaviour judged to have damaged family reputation.

Between 2007 and 2010, 29 women in the West Bank were officially reported murdered in the name of honour. A relatively small number, but one that is cause for concern because the actual number is believed to be far higher. The Palestinian Interior Ministry refuses to divulge exact statistics on honour killings.

The West Bank has a population of about 4 million, and Gaza about 1.5 million.

“The majority of these murders had nothing to do with protecting the honour of families. They were carried out for various criminal reasons. Often women are killed during family or financial disputes, and then the men claim the honour killing defence to get reduced sentences,” Hussein told IPS.

Palestinian law in the West Bank is based on Articles 97 to 100 of the Jordanian Penal Code, which reduces sentences for any act of battery or murder committed in a “state of rage”.
The law in Gaza is based on the Egyptian Penal Code, which also reduces sentences for men found guilty of killing female relatives in crimes of passion, particularly relating to declared sexual indiscretion and family honour.

According to the Women’s Centre for Legal Aid and Counselling (WCLAC) in Ramallah, only a minority of men who carry out these murders are ever convicted, and when they are the sentences are generally a few months.

In 2006 the Palestinian Authority (PA), which controls the West Bank, became a signatory to the Convention on the Elimination all Forms of Discrimination Against Women (CEDAW). Hassan al-Ouri, spokesman for Palestinian Authority President Mahmoud Abbas recently stated that the PA supported the ending of discrimination against women so long as this didn’t clash with Sharia law.

Hussein says this is nonsense. “Nowhere in the Quran is the murder of anybody justified on the basis of sexual indiscretion or rage. Our organisation is supported by religious leaders from various backgrounds who condemn these murders and in fact call for stronger penalties against the perpetrators.”

Contrary to popular belief the crimes of passion laws were in fact inherited from the region’s colonial occupiers including the Turks, the French and the British, said Hussein.

PA spokesman Hassan’s comments followed his confirmation earlier that the PA had no intention of outlawing honour killings despite pledges from Abbas last year that he would change the laws. Abbas had promised to suspend Law 340 which offers pardon for murder if the perpetrator committed the crime on finding his wife in bed with another man.

His comments were broadcast on television via video link following public outcry over the brutal murder of a young woman in the southern West Bank. In May 2011 Aya Baradiya from Hebron was strangled and beaten by family members who falsely believed she’d been socialising with men. Her body was found dumped in a well.

The PA President’s promises were seen by many as a politically expedient to whitewash the issue. Article 340 has never been used in Palestinian courts since it was legislated in 1960. The Jordanian and Egyptian Penal Codes which permit reduced sentences for crimes of passion committed by men remain intact.

“The issue of women’s rights is used as a political football. Promises for change are made when those in power seek political points as a result of public pressure, but the issue is ignored when conservative forces raise their heads. Furthermore, the PA only signed CEDAW because it carried no legal weight at the time as Palestine was not officially a state,” Hussein told IPS.

“Our leadership is out of touch with the majority of Palestinians who are against these murders.”

Hussein believes that Israel’s occupation has further damaged the fabric of Palestinian society.

“People are struggling to feed their families in a crippled economy. Palestinians are being indiscriminately killed by Israel on an almost daily basis. Sometimes women’s rights become secondary in people’s minds. Despite this there is no excuse for not at the very least introducing new legislation.

“The laws need to be changed as do the school curriculums and the attitude of the media which all reinforce the idea that women are inferior to men. I don’t see that happening under the current leadership especially as Fatah (the ruling party in the West Bank) and the even more conservative Hamas (in Gaza) are in the process of uniting,” said Hussein.