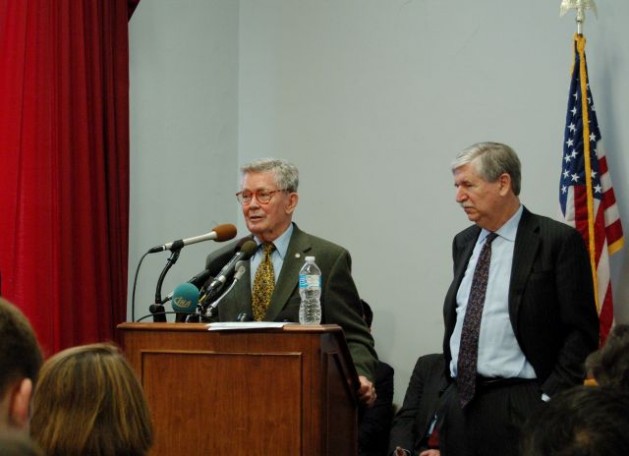 WASHINGTON, Feb 26 2013 (IPS) - On the eve of resumed talks between Iran and the P5+1 (the U.S., Britain, France, Russia, China plus Germany) in Almaty, Kazakhstan over its nuclear programme, two former hostages of the U.S. embassy takeover in Tehran argued that the aura of mistrust that has dogged relations for decades must be addressed.

“The ghosts of 1979 will be there and they will do their best to prevent any progress – they will haunt the proceedings, so to speak,” said retired Ambassador John Limbert at a Capitol Hill press conference Monday.

“All concerned should take steps [to address the shared issue of mistrust], particularly the governments of Iran and the United States,” Ambassador Bruce Laingen (retired), the chief of mission held hostage during the 1979 hostage crisis, told IPS.

To goad Iran into entering direct talks with the U.S., the Americans must come up with ways to show that they are serious about finding a peaceful solution.

“The two of us intrude on each other’s interests all the time. We’ve got to find a way reasonably to talk about those interests as they conflict or at least be ready to talk,” he said.

A fluent Persian-speaker and author, Limbert also urged broadening diplomatic efforts with Iran despite the constantly referenced grievances on both sides.

“The U.S. ‘two-track’ policy of engagement and pressure has – in reality – only one track: multilateral and unilateral sanctions, that whatever their stated intention and real effects, are allowing the Iranian government to claim credit for defying an international bully,” he said at the packed event, which was co-hosted by the Center for Arms Control and Non-Proliferation, the Friends Committee on National Legislation and the National Iranian American Council.

“To move forward, we must stop holding all questions hostage to agreement on the nuclear issue…The United States and Iran must open up dialogue on areas where there is political space on both sides to break the cycle of mistrust,” he said.

“The Islamic Republic, like it or not, is what it is and we have things to talk about, even if we are not friends,” said Limbert, a professor at the U.S. Naval Academy.

The Barack Obama administration maintains that “all options are on the table” to prevent a nuclear-armed Iran. “But neither side wants to resort to military action to reach a solution,” said Alireza Nader, a senior policy analyst at the Rand Corporation, during an Arms Control Association briefing Monday.

“A military conflict – you can a make a very good argument – would be against the national interests of all sides,” he said.

Still, what has been assessed by most Western nuclear experts and intelligence agencies as Iran’s slow but steady move towards a nuclear weapon capability has resulted in years of cold and at times tense relations between Iran and the U.S. and Israel, as well as an ongoing “crippling” sanctions regime that led to Iran’s currency losing 40 percent of its value in October 2012, among other economic pain.

Yet Iran continues to insist that its nuclear activities are completely peaceful and has shown no sign that it will submit to P5+1 demands – most recently described as the “stop, shut and ship” demand (Iran should stop enriching uranium to 19.75 percent, shut down its Fordow plant and ship out its stockpile of its 19.75-enriched grade of uranium) – without substantial sanctions relief and acknowledgement of what Iran interprets as its right to enrich uranium according to its interpretation of the Nuclear Non-Proliferation Treaty (NPT).

Hopes for bilateral talks between Iran and the U.S. were also dashed last week after a speech by Iran’s Leader Ali Khamenei was interpreted by the Western press as a rejection of direct talks.

“The U.S. is pointing a gun at Iran and wants us to talk to them. The Iranian nation will not be intimidated by these actions,” said the leader on Feb. 7.

But some analysts contend that bilateral talks, as with progress on the nuclear issue, remains possible.

“…the Leader did not explicitly rule out bilateral talks. He merely voiced deep scepticism as to whether they would lead to a resolution of the nuclear dispute,” wrote Peter Jenkins, the UK’s former ambassador to the International Atomic Energy Agency (IAEA), on IPS’s foreign policy blog on Feb. 8.

“To goad Iran into entering direct talks with the U.S., the Americans must come up with ways to show that they are serious about finding a peaceful solution,” Mohammad Ali Shabani, an Iranian political analyst based in London, told IPS.

“The Obama administration can do this by either taking on Congress to secure concessions, or pushing the European members of the P5+1 to lift EU sanctions,” he said.

While the P5+1 will reportedly present Iran with an updated proposal that will include “sanctions relief” in return for verifiable moves by the Iranians that their nuclear programme is entirely peaceful, few are expecting substantial progress during this round of talks, particularly because Iran is getting ready for its June presidential election.

The Iranians are unlikely to allow substantial nuclear progress to be made while Mahmoud Ahmadinejad is president, according to Shabani, who edits the Iranian Review of Foreign Affairs website.

“The best that can be achieved in Kazakhstan is for all sides to agree on some kind of road map for how to end the nuclear crisis down the road, and agree on a series of technical-level meetings to pave the way for high-level political talks later this year,” Shabani told IPS.

“Tearing down the wall of mistrust will not be easy,” said Laingen, who first served in Iran in 1953, during the Capitol Hill briefing Monday.

“But brick by brick, every step toward that goal advances the national security interests of the U.S. and Israel and other allies in the region, which are threatened by the spectre of another war in the powder keg of the Middle East,” he said.