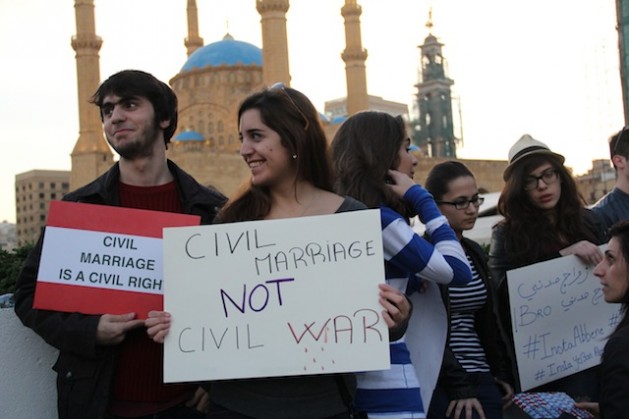 A demonstration in Beriut in support of civil marriage. Credit: Zak Brophy/IPS.

BEIRUT, Feb 9 2013 (IPS) - One couple’s modest marriage in Lebanon has catapulted them into media limelight and sparked a national debate pitting the Prime Minister against the President while eliciting stern condemnation from leading religious figures. Their union is both exceptional and controversial – it is the first civil marriage in the country.

In Lebanon social and political integration is realised through sectarian affiliation; it is within the legal institutions of the 18 different religious sects that marriages are traditionally authorised. “It is really a different feeling when you feel like a human being getting married to another human being based on human rights and not on sectarian rights,” the groom, Nidal Darwish, tells IPS.

Darwish and his bride Kholoud Sukkariyeh tied the knot in a secret ceremony at her house with just her brother for a witness, and a notary to oversee the signing of the contract. But once their marriage entered the public domain it soon became a hot and controversial topic of discussion across the country. What may in many societies seem a trivial matter cuts deep into Lebanon’s social, political and religious fabric. Lebanon President Michel Sleiman took to social media to lend his support to the couple, tweeting “We should work on legalising civil marriage contracts, this would be a step forward to abolish sectarianism and enhance co-existence.”

With the people’s attention drawn and Darwish and Sukkariyeh gracing prime time TV chat shows, Prime Minister Najib Mikati came out in opposition. The Prime Minister, in a twitter exchange with the President, said renewing the debate on civil marriage would be “futile” in the face of the political problems facing the country.

While the political community has come out split over the issue of civil marriage, there have been varying degrees of opposition from the religious establishments of different sects. The grand mufti of the Sunni Muslim community opposed the idea of civil marriage most virulently. He threatened in a religious edict, or fatwa, “Every Muslim official, whether a deputy or a minister, who supports the legalisation of civil marriage, even if it is optional, is an apostate and outside the Islamic religion.”

Civil marriages are not new per se to Lebanese couples. However, Darwish and Sukarriyeh broke the course set by thousands of other like-minded lovers who travel to foreign countries such as Cyprus or Turkey every year to tie the knot in a civil ceremony.

These marriages are recognised in Lebanon, and the Lebanese legal system can apply the civil marriage laws of the country in which the marriage was signed.

Sukkarieyh and Darwish, with the help of their lawyer friend Talal al-Husseini, found what they claim is a loophole in the law that legitimises civil marriage in Lebanon without the need to travel abroad. “The law in Lebanon from the time of the French mandate stipulates that if someone isn’t part of a sect he can’t be married by a sect, so the only place someone who doesn’t belong to a sect can get married is under civil law,” Husseini tells IPS.

This decree no: 60 from 1936 was originally intended for foreigners that marry Lebanese women because in 1936 all Lebanese belonged to a sect. However, in recent years Lebanese citizens have been allowed to strike out their sectarian affiliation from their identity papers. According to Husseini, this means the couple’s marriage has to be registered under civil law.

As there is no Lebanese civil marriage law, he argues they can choose a foreign law, which in Sukkariyeh and Darwish’s case is the French civil code.

This legal argument was rejected by Minister of Interior Marwan Charbel. The state refused to register the couple’s marriage, and Charbel argued in an interview to local newspaper an-Nahar that Lebanon needs its own civil marriage law before such unions can be recognised.

“For such a law to be adopted in Parliament, it should deeply tackle the rights of the couple and should deal with divorce, inheritance and other issues,” he said.

The dispute over the balance of religious and civil law in Lebanese society runs back to the very inception of the country and perhaps reached its apex in 2011 when tens of thousands of Lebanese, inspired by the successful uprisings in Egypt and Tunisia, took to the streets to protest against the sectarian system in its entirety.

The first civil personal status law was submitted to parliament in 1971 but was rejected, and the sectarian divisions within society only became further entrenched and exacerbated during the bitter civil war from 1975 to 1991.

In the wake of the conflict former president Elias Hrawi presented a draft law on civil marriage in 1998, which received the majority of votes in the cabinet. However, then prime minister Rafiq Hariri shelved the legislation and didn’t send it to parliament.

“Of course this was not legal but Hariri was was controlling the government to serve his position and the sects,” Tony Daoud, civil society activist with local NGO, Chaml tells IPS.

In 2011 Chaml, in collaboration with academics Dr Ugarit Younan and Dr Walid Sleiby, submitted a draft personal status law to the government covering all issues that currently fall to the religious courts.

Unlike its 1971 predecessor though, this law is optional. “We’ve learnt from the mistakes of the past, that law could not pass because they were pushing for it to be obligatory,” says Daoud. The more recent legislation has passed the most cumbersome stages of the Lebanese bureaucracy and is in the final phase before being voted in parliament.

With the government refusing to acknowledge the marriage of Darwish and Sukkariyeh, the marriage may, in the short term at least, prove to be more symbolic. However, their union has elicited debate and raised awareness in the wider society in a way that years of civil society activism only struggled to achieve.

Sukkariyeh hopes her Lebanese civil wedding can “become a cornerstone for a non-sectarian Lebanon.”

While many politicians pay lip service to her cause, especially in this pre-election period, they argue that they need a new law before Lebanese civil marriages can be recognised. Since 2011 they have had a complete civil personal status law sitting in parliament. They just need to vote on it. (End)