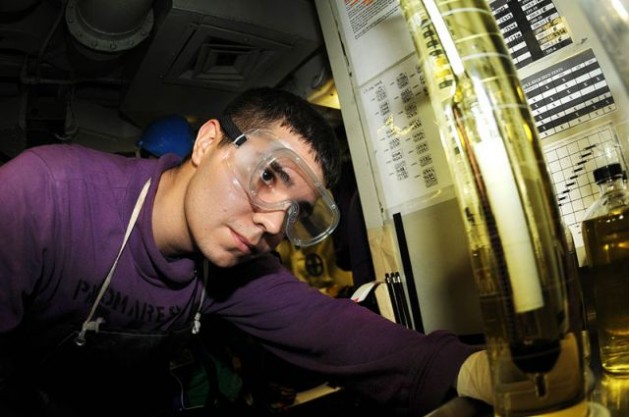 Biofuels are tested aboard the USS Nimitz. Credit: US Navy

WASHINGTON, Feb 1 2013 (IPS) - New biofuel requirements proposed by the U.S. Environmental Protection Agency (EPA) are being met with concern by a spectrum of interest groups from environmentalists to the oil industry, with some warning that a gap between the proposal and existing law could force the government to draw on food-based alternative fuels.

The announcement, which opens a 45-day feedback period, sets standards under the country’s landmark Renewable Fuel Standard programme. That 2007 legislation established long-term goals for alternative fuel use – 36 billion gallons a year by 2022 – for which the EPA is mandated to set yearly requirements for the country’s petroleum importers and refiners.

The new requirement proposals offer standards for three types of alternative fuels: biomass-based diesel made from various vegetable or even animal oils (1.28 billion gallons); “advanced” biofuels for use, for instance, in planes or ships (2.75 billion gallons); and “cellulosic” biofuels made from non-food items such as inedible grasses (14 million gallons).

This last type is of particular importance, given that legislators in 2007 specifically aimed to preclude any competition between the productions of biomass for alternative fuels versus food. Yet while the proposals do incrementally increase the usage levels across this range of fuels by about 1.4 billion gallons more than were stipulated in 2012, the level for cellulosic fuel is far lower than the original legislation stipulates as a signpost for this year.

By 2013, the 2007 bill states, the U.S. was to be using a billion gallons of cellulosic biofuel. The EPA’s announcement of just 14 million gallons would thus leave a massive shortfall – and even this lower figure could be a stretch.

The problem is that U.S. production capability for cellulosic biofuel has yet to come anywhere near satisfying the legally required demand. Production capacity was particularly hampered by the timing of the 2007 bill, which came immediately before the massive economic contraction of 2008, during which investments for the 100-million-dollar refineries required for this type of operation dried up.

Although investments in cellulosic biofuel refining have now picked up, the market has yet to achieve commercial viability. Last week, a court voided previous EPA requirements for this type of biofuel (for 2010 and 2011) because the country had produced none of the product during those years, and just 21,000 gallons last year.

While the court says that the EPA’s requirements were baseless, agency officials say the proposed standards constitute a “reasonable representation of expected production” by a handful of start-up refineries. The group that brought the court case, the American Petroleum Institute (API), an industry lobby group, has responded scornfully.

“The court recognized the absurdity of fining companies for failing to use a nonexistent biofuel, but EPA wants to nearly double the mandate for the fuel in 2013,” Bob Greco, an API official, said in a statement. He also suggested that the agency “needs a serious reality check” and that “its renewable fuels program is unworkable and must be scrapped.”

Still, the EPA’s new moves have been strongly backed by the biofuels industry.

“The cellulosic biofuels industry is just breaking through at commercial scale,” Brooke Coleman, executive director of the Advanced Ethanol Council, a trade group, said in a statement, noting that the EPA had gotten the related standards “just right”. “The volume standards proposed … will continue to provide advanced biofuel investors and innovators with a predictable and durable path forward in that effort.”

Currently, two cellulosic refineries are operating in the United States, with at least two more under construction. As such, even if the current forecasts were to be overly optimistic – and analysis by several advocates suggests that the EPA’s estimates may be conservative – the market for this type of biofuel looks set to achieve commercial viability in the next year or two.

Yet some are worried that the way in which the United States makes up the shortfall in its cellulosic biofuel stocks could still have significant impact. This gap is not only an issue with regard to the 14 million gallons that the EPA has now proposed, but more importantly the billion gallons required by the original 2007 legislation.

This means that at least 986 million gallons of alternative fuel will still need to be accounted for this year.

“Because these mandates are ‘nested’, that 986 million gallons would turn into a mandate for biodiesel, which in turn could come from sugarcane, vegetable oil, etc.,” Jeremy Martin, a senior scientist with the Union of Concerned Scientists’ Clean Vehicles Programme, told IPS.

“When you look at this year’s market, look at the availability of vegetable oil and sugarcane ethanol – those markets are tight, and so we don’t think it would be a good idea to expand those mandates faster.”

While Martin notes that he fully supports the broad aims of the EPA’s moves on alternative fuels, he says that just because cellulosic biofuel production is currently behind schedule “doesn’t mean we need to accelerate mandates that threaten our environment and our food supplies.”

Further, if the EPA decided to move in this direction, it might not be only the U.S. environment and food supplies that are threatened.

“The economists that model this type of thing initially thought that the remainder would be made up mostly through sugarcane, but now it looks like it might be diesel. Both of those, however, particularly the sugarcane ethanol, would almost certainly be imported,” Martin says.

“We’ve looked at the resources available for cellulosic fuel, and the United States has substantial resources. But that’s in contrast with biomass diesel and sugarcane, which are in short supply and in competition with food production.”

Further, one of the fastest-growing and cheapest sources of vegetable oil (for biomass diesel) is palm oil, the production of which in recent decades has been blamed for the clear-cutting and monoculturing of at least 15 million hectares worldwide, according to the United Nations in 2011.

While the EPA has made a preliminary ruling suggesting that palm oil may not environmentally friendly enough for use under the renewable fuels mandates, that ruling is not yet final.

“As you expand these standards, independent of whether you use soybeans, corn or other materials, at the end of day if there is an inadequate supply more will have to come from overseas,” Martin says. “And we think that palm oil will be the new supplier of vegetable oil into the world market.”