UXBRIDGE, Canada, Mar 22 2013 (IPS) - How much water does it take to turn on a light? It took 10,000 litres to make your jeans. Another three big bathtubs of water was needed for your two-eggs-toast-coffee breakfast this morning. 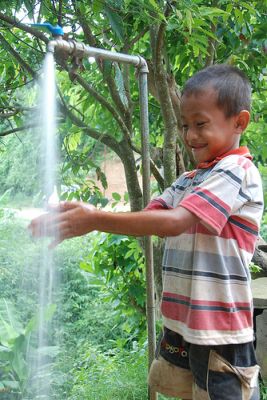 Piped water has made life easier for this Laotian boy, who no longer has to help his parents fetch water from afar. Up to 1.7 billion people face scarcity. Credit: Vannaphone Sitthirath/IPS

We are surrounded by an unseen world of water: furniture, houses, cars, roads, buildings – practically everything we use and make needs water.

“There is no way to generate energy without water,” said Zafar Adeel, co-chair of the UN-Water Task Force on Water Security and director of the Institute for Water, Environment and Health in Canada.

Even solar panels need regular washing to perform well. Wind energy might be an exception, Adeel told IPS from a water conference in Beijing being held during World Water Week.

There is growing recognition that peak oil is nowhere near as important as peak water because there is no substitute for water. The growing shortage of water — 1.2 to 1.7 billion people face scarcity — has alarmed many. Water has been identified as an “urgent security issue”, by a group that last year included both former U.S. Secretary of State Hillary Clinton and the InterAction Council, an association of 37 former heads of state and government.

It’s important that “water security” be recognised by the U.N. Security Council as either as a trigger, a potential target, or a contributing factor to insecurity and potential conflict in many parts of the world, said Adeel.

Defining exactly what the term “water security” means has been challenging, but UN-Water, the United Nations’ inter-agency coordination mechanism for all water-related issues, now has a working definition.

They have defined water security as: “The capacity of a population to safeguard sustainable access to adequate quantities of and acceptable quality water for sustaining livelihoods, human well-being, and socio-economic development, for ensuring protection against water-borne pollution and water-related disasters, and for preserving ecosystems in a climate of peace and political stability.”

The definition was released Friday on World Water Day along with an analytical brief “Water Security and the Global Water Agenda“.

“Water fits within this broader definition of security — embracing political, health, economic, personal, food, energy, environmental and other concerns — and acts as a central link between them,”says Michel Jarraud, Chair of UN-Water and secretary-general of the World Meteorological Organization (WMO).

It is important to note that conflicts over water are rare. “Historically there hasn’t been a war between nations over water,” said Harriet Bigas, a co-author of the brief and colleague of Adeel at the Institute for Water, Environment and Health.

Water issues do create friction between nations and have led to local internal conflicts, she said in an interview.

Driven largely by water and food shortages linked to drought in the Horn of Africa, almost 185,000 Somalis fled to neighbouring countries in 2011. In Sudan, violence broke out in March 2012 in the Jamam refugee camp where large numbers of people faced serious water scarcity. And in South Sudan, entire communities were forced to leave due to scarce water resources as a result of conflict in 2012.

However, the norm is for nations and regional partners to work out water-sharing agreements, offering important opportunities for dialogue amongst traditional enemies.

Even when nations are at war, they negotiate water-sharing agreements, Wolf says. Vietnam, Cambodia, and Laos continued the successful Mekong Committee to manage the Mekong River even during the Vietnam war.

In 2010 Brazil, Paraguay, Uruguay and Argentina signed an agreement to share the management of the Guaraní Aquifer, which extends over more than one million sq km. A population of 15 million today relies on the aquifer because surface water, though abundant, is often polluted, the UN-Water brief noted.

There’s also rising international support for adopting “universal water security” as one of the Sustainable Development Goals (SDGs) — a set of mid-term global objectives to succeed the U.N.’s Millennium Development Goals, agreed by world leaders in 2000 for achievement by 2015.

“Water encompasses all aspects of development. We’re hopeful water security will be one of the main SDGs,” said Adeel.

Water, food and energy are sides of the same triangle – shrink one side and it affects the other two, he said.

An SDG for water security should include targets and indicators that reflect this. It needs to specific to various countries’ needs and indicate what resources will be needed to achieve water security. “It’s important to explicit state how each country can get there.”

The draft SDGs will be presented at the opening of the U.N. General Assembly this September.

The biggest challenge in achieving universal water security is not money or technology but human institutions, said Bigas. Simply getting government departments in the same country to coordinate on water issues is “an enormous challenge”.