BUENOS AIRES, Mar 16 2013 (IPS) - Argentine archbishop Jorge Bergoglio was selected as pope at a time when the Roman Catholic Church in this South American country is facing a rebellion by priests and laypersons who reject the role of the church leadership during the 1976-1983 dictatorship and the lack of reparations for past omissions and complicities.

The accusations against Bergoglio for his alleged ties to the dictatorship, which made headlines around the world when his appointment as pope was announced by the Vatican, are just the tip of the iceberg of a controversy that has raged for decades without a solution and which is coming to light as the regime’s human rights violators have been brought to trial since the amnesty laws were scrapped.

Groups like Curas en la Opción por los Pobres (Priests with an Option for the Poor), Cristianos por el Tercer Milenio (Christians for the Third Millennium) or Colectivo Teología de la Liberación (Liberation Theology Collective) have voiced increasingly harsh criticism against the Argentine bishops’ conference’s shortcomings in terms of self-criticism, in spite of an apology and pledge to investigate issued a few months ago. 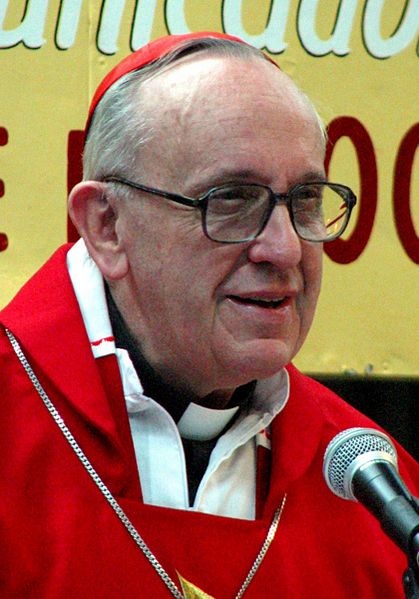 “It’s good that this debate is happening, that we work to clarify what happened, so that the truth will come to light. That would be very healthy,” Claudia Touris, a researcher at the University of Buenos Aires and the coordinator of Relig-Ar Grupo de Trabajo en Religión y Sociedad de Argentina (Relig-Ar: Working Group on Religion and Society in Contemporary Argentina), told IPS.

The debate that has divided Catholics in Argentina broke out as a result of a statement issued in November 2012 by the Argentine bishops’ conference, in which they apologise “to those we let down or failed to support as we should have” during the dictatorship.

They also promised to carry out “a more thorough study,” to find out the truth.

The statement was issued as a “Letter to the People of God” and was titled “Faith in Jesus Christ leads us to truth, justice and peace.” It condemns the crimes committed as a result of “state terrorism” but adds that “We also know of the death and devastation caused by the violence of the guerrillas”.

Opponents of the regime criticise that interpretation.

Cristianos por el Tercer Milenio described the statement as falling short because it denies the connivance between some prelates and the dictatorship. According to the group, made up of laypersons, those who served as military chaplains should be demanded to provide information, and “scandalous situations that confuse and weaken the faithful should be brought to an end.”

For their part, Curas en Opción por los Pobres said they were “scandalised by so many stances running counter to the Gospels” and by the fact that priest Christian von Wernich, who was sentenced for human rights violations, “was not expelled from the priesthood,” and unrepentant former dictator Jorge Rafael Videla, found guilty of crimes against humanity, continues to receive communion.

On the eve of Bergoglio’s appointment as pope, Curas en Opción por los Pobres, priests who live and work in Argentina’s slums, loudly protested because the bishops had taken reprisals against one of the priests who had criticised the statement released by the bishops’ conference.

Bishop Francisco Polti of the northern province of Santiago del Estero transferred Father Roberto Burell, one of the signatories of the letter that the Curas en Opción por los Pobres sent to the bishops, from his parish.

“We aren’t going to call you ‘estimados’ (esteemed – the formal form of address in a letter in Spanish) because we do not esteem cowards,” says the letter sent by the priests.

The priests also told the bishops that when they are no longer bishops “only the powerful will be sorry, because the poor, the peasants and indigenous people will celebrate.”

That was the climate among Catholics in Argentina when Cardinal Bergoglio was elected Wednesday Mar. 13 as the first pope from Latin America.

Touris said the bishops’ conference statement was considered overly timid by many Catholics, although it was a fairly novel call for those who have information on forced disappearances or the theft of the children of political prisoners – two human rights abuses widely committed by the dictatorship – to come forward.

“We’ll have to see if this continues, and if it goes deeper,” she added.

She said there was no single, unanimous Church position with respect to the regime, which is why some bishops were ideologically in line with the military and helped “sweep out alleged communist infiltrators,” while other priests and bishops supported the victims of persecuation.

As examples of the former, Touris mentioned Cardinal Raúl Primatesta, army vicar Victorio Bonamín, and archbishops Adolfo Tortolo and Antonio Plaza – all of whom are dead – who witnesses said they had seen in clandestine detention centres.

But, Touris said, there were also bishops who stood alongside the victims of the regime, such as Jaime de Nevares, Jorge Novak or Miguel Hesayne, as well as dozens of priests, nuns, seminary students and laypersons who were kidnapped, “disappeared”, murdered, or forced to flee into exile.

Two bishops are considered martyrs for their opposition to the regime.

The first is Enrique Angelelli of the diocese of the northern province of La Rioja, who was killed in 1976 in a purported car accident which is suspected to have been a murder. The other is Carlos Ponce de León, bishop of the Buenos Aires district of San Nicolás, who also died in a suspicious car crash in 1977.

At the time, Bergoglio was the Jesuit Provincial (elected leader of the order). Two Jesuit priests who worked in poor neighbourhoods were abducted. Some accuse the new pope of turning them over, but others say that on the contrary, his influence saved them.

Touris said the superior general of the Society of Jesus was Spanish priest Pedro Arrupe, who urged the priests to assume a political and social commitment. As a result, more Jesuits were persecuted, tortured and forcibly disappeared in Latin America in the 1970s than priests from any other order.

In Argentina, under Bergoglio’s leadership, the order assumed a more traditional position, the professor noted. He urged the more socially committed priests to abandon their social activism in order to avoid repression, as he himself stated in his defence.

Argentine human rights activist and 1980 Nobel Peace Prize-winner Adolfo Pérez Esquivel, an active believer, said this week that “the Catholic Church did not take a homogeneous stance” with respect to the regime, and “there were bishops who were complicit in the dictatorship…but not Bergoglio.”

“I believe he lacked the courage to support our struggle for human rights at the most difficult times,” Esquivel said in a statement issued by his organisation, Servicio de Paz y Justicia (Peace and Justice Service) in Argentina.