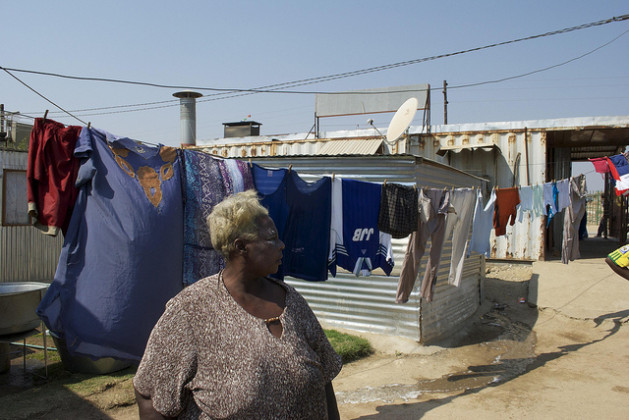 Congress of South African Trade Unions says a BRICS Development Bank must promote development and industrialisation and job creation in the country. Pictured here is Pal Mfunzana, a resident from the poverty-stricken township of Diepsloot, in Johannesburg. Credit: Chris Stein/IPS

JOHANNESBURG, Mar 28 2013 (IPS) - Although leaders of the Brazil, Russia, India, China and South Africa group agreed to launch a new development funding institution, giving the club a major infrastructure boost, some here are sceptical about the potential impact of the new bank.

“I don’t think it will have much impact in South Africa, where capital is not the problem, but policy is,” Frans Cronje, deputy chief executive officer of the South African Institute of Race Relations, told IPS. The fifth BRICS summit was held in Durban, South Africa from Mar. 26 to 27.

There are concerns that some of the key details still remain to be agreed upon and announced, and also because the operation of the new BRICS Development Bank will need to be closely monitored if it is to convince observers that it will have a real impact on funding development.

“This new bank will be way smaller than the World Bank or International Monetary Fund (IMF), so it will have a marginal impact compared to those institutions,” Cronje said.

It has been suggested that all BRICS nations will initially be paying 10 billion dollars towards the seed capital of the bank, and Cronje said that it is “odd” that South Africa should be paying its full share when it has just two percent of the GDP of the BRICS.

“Is this a vanity project for South Africa?” he questioned. “Is shifting the balance away from the World Bank and the IMF simply ideological romanticism

It is already clear that the bank will focus on infrastructure projects, but there is still uncertainty about several details, including the geographical footprint of the bank, its site and the currency or currencies in which it will operate.

“The first focus of the bank is on infrastructure, which is as it should be,” independent Johannesburg economist Mike Schussler told IPS.

“There will be discussion on where you put the money, as South Africa, Brazil, Russia and India all need infrastructure, and there will be a shortfall of funds.

“So the challenge will be on how to commit the initially inadequate resources.”

Memory Dube, a senior researcher at the South African Institute of International Affairs, a non-governmental research institute, described the agreement to go ahead with the bank, which was taken by BRICS finance ministers in Durban on Tuesday Mar. 26, as “significant” in the evolution of the BRICS grouping into a solid and sustainable alliance.

“It provides an institutionalisation for the BRICS. Until now, it has been a loose grouping, but this new bank will glue the members together.

“This is an actual institution that belongs to the BRICS and will be run by the BRICS. There is now no doubt that the BRICS will exist 10 years from now, 20 years from now – there is something tangible,” she told IPS.

Spokesperson for the Congress of South African Trade Unions, Patrick Craven, was guarded about the new bank.

“It is too early to assess it,” he told IPS. “We want a lot more detail on how the bank will operate and who will be in charge of it.”

“We will insist its mandate is very different to that of the World Bank and the IMF – which are used to reinforce the domination of the North American and Western European economies and have had a very negative effect on developing countries, by imposing constraints on lending.

“A BRICS Development Bank must promote development and industrialisation and job creation.”

Entrepreneur Sandile Zungu is one of the five South African delegates who sit on the new BRICS Business Council, which was also launched at the Durban summit.

“Often infrastructure projects in South Africa and in the rest of Africa have the potential to benefit one or more of the BRICS countries,” he told IPS in a telephone interview from Durban.

“With the new BRICS Development Bank, these projects will have a better chance of getting funding than they would have done from the World Bank. There will be a wider pool of funding.”

Dube said she was keen to learn about the site of the new BRICS Development Bank, as this had not been announced at the time she spoke to IPS from the summit on Mar. 27. South Africa has been keen to host it, but China is also a strong candidate.

However, Zungu said that he believes South Africa is the strongest candidate among the BRICS nations to host the new institution.

“Arguably, South Africa has the best financial services system of all the BRICS countries, and the World Bank says we have the best.

“We are also closest to the area of greatest need for infrastructure development.”

Dube also expressed an interest in seeing a lot more detail on other issues concerning the new bank. “If they structure it right, it might make a real difference,” she suggested.

“But the devil will be in the detail.”

She said it would be important to see the funding structure of the new bank.

“We have heard each BRICS country will contribute 10 billion dollars,” she said. “But will that be enough?  Will further funding be raised on the open market? I also want to see more detail on the BRICS Development Banks’ decision-making structure.

“We also need to see the regions in which it will operate – will it be for all developing nations, or for the BRICS members only?

“Then we need to look at spending priorities, and what currency it will operate in. Will it be the United States dollar, or will the BRICS nations decide it must operate in their own currencies?”

The political hurdle has been overcome with the decision in Durban to found the BRICS Bank.

However, the credibility of the bank itself and of the BRICS alliance now rests on the skill and efficiency with which it is brought to life and on the degree to which it can make a real difference to development in the BRICS nations and beyond.