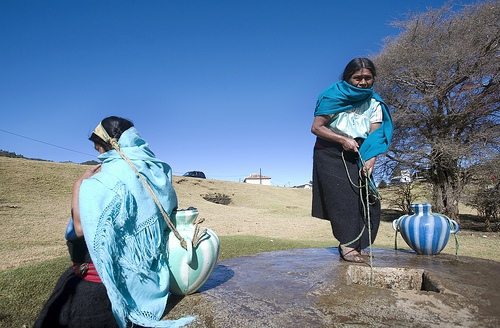 BUENOS AIRES, Mar 22 2013 (IPS) - The new pope’s choice of the name Francis, to honour the Catholic Church’s patron saint of animals and the environment, has awakened the hopes of ecologists and others who are concerned about rampant consumerism and the deterioration of the planet.

In 1979, then Pope John Paul II proclaimed St. Francis of Assisi (1181/1182-1226) the patron saint of ecologists. In his first mass as pope, on Mar. 19, Jorge Bergoglio said: “Let us be protectors of creation, protectors of God’s plan inscribed in nature, protectors of one another and of the environment.”

”It’s excellent that a world leader is taking up this issue as a priority,” Diego Moreno, director of the Fundación Vida Silvestre, Argentina’s main wildlife advocacy organisation, told IPS. “With the Church’s ability to reach people, the fact that the environment is part of the pope’s discourse is very important, because it will get more people involved.”

In Latin America and Africa, “environmental problems are closely linked to poverty, with the poor living in areas that are the most vulnerable to climate change and the degradation of the soil,” he said.

But there are also other areas in which the pope “could turn out to be an ally,” Moreno added. For example, excessive consumption – “verging on squander” – has a huge impact on natural resources, he said.

Both environmentalists and bishops in Latin America criticise consumerism and urge people to follow a simpler lifestyle.

The pope’s homily was in line with the recommendations set forth in the final document of the 5th General Conference of the Council of Latin American Bishops in Aparecida, Brazil, in 2007.

Bergoglio, who was an Argentine cardinal before he was elected pope on Mar. 13, presided over the committee that drew up the final conclusions.

The document criticises the extractive industries and agribusiness for failing to respect the economic, social and environmental rights of local communities, and questions the introduction of genetically modified organisms because they do not contribute to the fight against hunger or to sustainable rural development.

The final document also stressed the region’s rich flora and faun and social diversity, defended traditional indigenous know-how that has been “illicitly appropriated” by the pharmaceutical industry, and called for the preservation of the Amazon rainforest as part of “the inheritance we received, for free, to protect.”

The call for the preservation of the environment “is a little-known aspect” of the Aparecida final document, Pablo Canziani, a doctor in physical sciences who is in charge of the environmental area of the department of laypersons in the Argentine bishops’ conference, told IPS.

Environmental issues were not traditionally a concern of the Catholic Church, until they took on importance because of their links with human development, said Canziani, a member of the Intergovernmental Panel on Climate Change (IPCC).

“It is the poor who suffer the most from climate change, desertification, or the waste of food,” said the scientist, who has served as an adviser to several Vatican delegations to United Nations conferences on poverty, the environment and food.

In Aparecida, the bishops stressed that in Latin America and the Caribbean, nature “is fragile and defenceless in the face of the economic and technological powers.” And they said “the interests of economic groups that irrationally destroy the sources of life” should not be predominant over natural resources.

The final document also called for educating people to live a simple, austere lifestyle based on solidarity, for expanding the pastoral presence in communities threatened by activities that destroy the environment, and for seeking “an alternative development model, based on an ethics that includes ecology.”

John Paul II (1978-2005) was the first to put these issues on the Church agenda, said Luis Scozzina, a priest who is the director of the Franciscan Centre of Studies and Regional Development.

The Centre was created in Argentina’s Catholic University “to contribute to information and research on questions related to the environment,” its web site says.

“Protecting creation” is one of the central focuses of Franciscans, Scozzina told IPS. And he said Bergoglio is “the most Franciscan Jesuit we have ever known,” because besides his intellectual leanings, characteristic of the Jesuits, he leads an austere lifestyle with close ties to the poor, as Franciscans do.

“Francis will put the ecological crisis high up on the agenda. He already indicated that in his mass, when he spoke of protecting three dimensions: ourselves, one another, and creation. By ‘one another’ he meant the poor, who are hurt the most by the consequences of environmental deterioration.”

Father Scozzina added that “even the most optimistic warn that we are moving towards steady destruction, and in response to that, we in the Church are calling for an ethics of austerity, a change in lifestyle that leaves behind this frenzied consumption.”

In Aparecida, he noted, the bishops signalled the need for a change in the production model. “In Latin America, this merits reflection. Are we going to continue with the model of extraction of our natural resources?” he said.