Mexican engineers have begun to work on developing unmanned aerial vehicles for scientific and commercial uses. 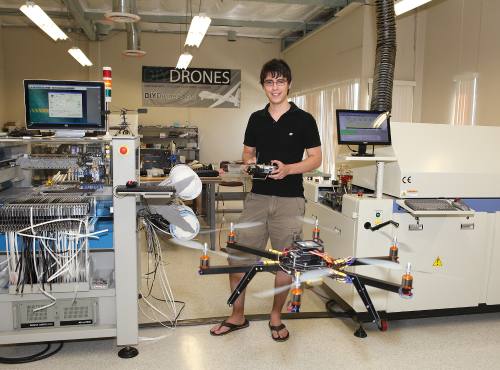 Jordi Muñoz began building drones as a hobby in 2007 and is now a founding partner of a fast-growing company in the field. Credit: Courtesy of Jordi Muñoz

MEXICO CITY, Apr 11 2013 (IPS) - Unmanned aerial vehicles (UAVs), better known as drones, have earned a bad reputation due to their controversial use by the United States in its “war on terrorism”, yet they have almost unlimited potential as tools for scientific research.

The word “drone” is most commonly associated with the remotely piloted and heavily armed aircraft that are used by the United States to strike down suspected terrorists, but have also caused a great many civilian deaths in countries like Afghanistan, Pakistan, Somalia and Yemen.

However, more than 40 countries around the world either deploy or manufacture drones, according to reports consulted for an article published by IPS.

These unmanned airplanes and helicopters are used for such diverse purposes as drawing maps, exploring the ocean floor, measuring temperature or pollution levels, monitoring weather phenomena, and the surveillance of high-risk areas or archaeological sites.

Last month, the U.S. space agency NASA sent drones into the plume of the Turrialba volcano in Costa Rica to study its chemical composition.

“The technology is emerging, the first applications have just barely begun. Society itself has learned to accept drones beyond their military uses, because they have seen the different ways they can be used. It’s just a matter of time” until they become more widely developed and used, said young Mexican entrepreneur Jordi Muñoz, co-founder of 3D Robotics, a pioneer in the manufacture of drones in Mexico.

His story mirrors the evolution of drones, which he began to build in 2007 with the help of 500 dollars provided by U.S. physicist Chris Anderson.

“He gave me the money purely on trust. It was the best 500 dollars I ever invested. I decided to build a drone. I was developing the automatic pilot and I went on Google to look for information when I came across a forum. I went in, registered, and saw that they were posting things about homemade drones,” recalled Muñoz, who is currently finishing a degree in computer engineering at the University of California, Berkeley in the United States.

The forum was DIY (“Do It Yourself”) Drones, an online community created by Anderson in 2007 as a space for hobbyists who build their own UAVs to share experiences, electronic codes and component maps.

“I started to post videos, write code, and document and publish what I was doing,” Muñoz told Tierramérica*. His work caught the attention of Anderson, the editor-in-chief of Wired magazine until this past January and now the young Mexican’s partner in 3D Robotics.

The company does not sell UAVs for military use. The vehicles are designed in the southwest U.S. city of San Diego and assembled across the border in Tijuana, Mexico. They receive between 100 and 150 orders daily from clients in the United States, Brazil, the United Kingdom, Australia, Germany, Israel and Japan.

3D Robotics currently employs 60 people and hopes to expand its staff to 100 by the end of the year. Since its founding in 2009, the company has earned around 10 million dollars through sales and received another five million from three U.S. funds that provide financing for tech firms.

“In 2013 we want to professionalise all of our products. There have been huge advances, everything has now been greatly simplified, and we want to make drones easy to use. But we need engineers to write code, for manufacturing,” said Muñoz.

Working on the basis of open licensing, a network of engineers around the world work together to improve codes and develop more advanced products.

In 2012, Muñoz was chosen as one of the top ten innovators under 35 in Mexico by Technology Review, which is published by the Massachusetts Institute of Technology.

A drone is equipped with a high-speed processor, battery, GPS receiver, compass and sensors like an accelerometer and gyroscope. Unmanned planes can fly for up to three hours, and helicopters for half an hour. Connected to a modem, they can transmit real-time data in a range of up to 60 kilometres.

In Mexico there are no regulations on the use of drones, although the government uses them to fight drug trafficking, some companies use them to supervise construction, and universities use them for scientific research.

At the Center for Research and Advanced Studies of the National Polytechnic Institute (CINVESTAV), three researchers are building prototypes for surveillance and security, with an eye towards commercial production.

“We lost a bit of time. If we had done it five years ago, we would be on a par with other countries. It wasn’t given much importance, so there was no research. We have a great deal of potential, above all because the students we are training start out with a more advanced awareness,” Hugo Rodríguez, a mechatronics researcher at CINVESTAV, told Tierramérica.

“The models will continue to improve, and we will gain experience by solving new problems. We could have a marketable prototype within a short time, with trained human resources,” said Rodríguez, who has a doctorate in automation and signal treatment from the University of Paris XI.

Since 2007, the centre’s specialists have designed a four-engine plane, two fixed-wing aircraft and two helicopters, and have experimented with their automatic controls.

“As this work continues to develop, a marketable technological application could emerge. We’ve been approached by companies, but we didn’t have a prototype ready yet,” said Rodríguez.

Although the commercial use of drones is currently prohibited in the United States – they are only permitted for scientific or recreational uses – the government is preparing to integrate them into the national airspace in 2015. The Federal Aviation Administration (FAA) estimates that as many as 30,000 non-military UAVs will be in the sky by the end of the decade, for a range of different purposes.

A recent study, “The Economic Impact of Unmanned Aircraft Systems Integration in the United States”, predicts that in the first three years of integration, more than 70,000 jobs will be created.

The study, published in March by the Association for Unmanned Vehicle Systems International (AUVSI), an industry group, estimates that between 2015 and 2017, the economic impact of drone integration will be greater than 13 billion dollars and could reach 82 billion by 2025, in terms of revenues earned by manufacturers and suppliers from the sale of new products as well as “the taxes and monies that flow into communities and support the local businesses.”