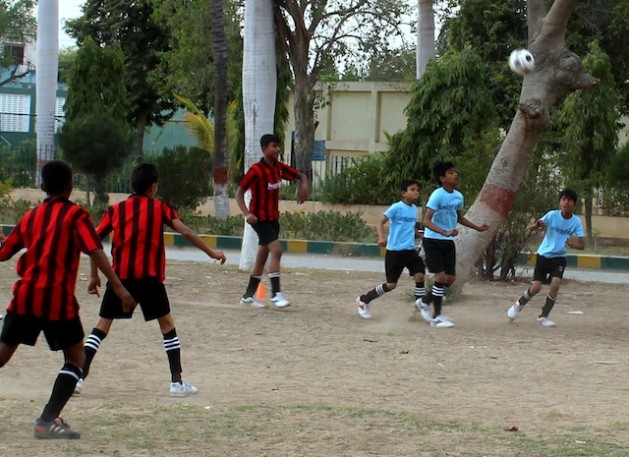 KARACHI, Apr 7 2013 (IPS) - Oblivious to the cloud of dust they have kicked up in just a few minutes, panting and sweating, moving lithely, this way, then that, they jostle the ball smoothly until one team scores a goal.

There’s a loud cheer. Wiping the sweat off his brow, young Iman Hussain throws up his hands in frustration, looks with displeasure at the scoreboard, and shouts: “Concentrate, you guys!”

Just 12, Hussain is among a motley group of boisterous young boys who are having a practice match of football at one of Karachi Municipal Council (KMC) sports complex grounds in Karachi. Of all sizes, and aged between 10 and 16, they have been selected after Karachi-wide trials to form the Street Strikers. It will be among teams from 20 countries to compete for the 2014 Street Child World Cup, to be held in Rio de Janeiro, in Brazil.

Clad in a black-and-red striped T-shirt, black shorts, knee-high black socks and shoes, Hussain is known for his agility, but as much for his temper. “They like my passing and that is why I have been chosen for the team,” he tells IPS proudly.

Hussain, till a few years ago, was a deft pickpocket, living off the streets of Karachi. He is among Pakistan’s 1.2 million to 1.5 million children living on the streets. He had run away from home when he was just seven because his older brother used to “tie him up” and beat him blue for not “paying attention to studies.” Son of a fisherman, he has five brothers and six sisters.

Today, he has been reintegrated back into his family, has joined school and counts football among his foremost passions. “I want to show the world I am good at something!” he says, adding a little excitedly: “It will be my first time on an airplane!”

The initiative was taken by Azad Foundation (AF), a non-governmental organisation that has been working for Karachi’s street children since 2001. They provide meals, shelter, healthcare and education through three drop-in centres to close to 3,500 of Karachi’s over 12,000 street children. Currently, a little over 100 among them are going through various stages of a rehabilitation process, and will finally get reintegrated.

Since the beginning of the year, AF has started a five-year Sports for Development project. “In Karachi, we are working in three (of the 18 administrative units) and in the rest of the three provinces, we are collaborating with organisations already working with street children,” Ali Bilgrami, who heads the sports project, tells IPS. “Initially, we will focus on football, but if there is demand for other sports we can always include cricket and hockey.” However, he emphasises, it will have to be a team sport.

Itfan Maqbool, spokesperson for AF, hopes the World Cup will help in “educating society to the realities of the issue of street children and how these children survive, fending for themselves.”

These boys have been training for over three months now and have played matches with other teams who have been playing for many years. A lot has changed since then – most of all, their behaviour.

Coach Haris Jadoon finds that the kids have been able to work on anger management issues to quite an extent. “When we started, I found them a much rowdier bunch, refusing to do their warm-up exercises or follow rules or even pay heed to the whistle. All they wanted to do was to get hold of the ball and start playing.

“Losing was unthinkable for them and throwing a tantrum, getting angry and crying was common. Slowly, however, they realised that it’s a team sport and they can win only if they work as a team,” he says.

He adds: “Through the process of teaching them the rules of the game, we teach them qualities like fairness, hard work, honesty, while building their confidence and communication skills.”

Sadia Ahmed, a psychologist with AF, knows each boy well and says her job has been made much easier ever since the boys started playing football. “It’s half my job done,” she says. “They are much happier, easier to manage and more receptive to you. I also find many have grown taller and bigger in the last couple of months,” she tells IPS.

For Itfan, however, the biggest success has been that since they started playing, quite a number of the boys have been more amenable to reintegrating into family life, which is the ultimate aim of the foundation.

Owais Ali, 16, plays as a defender. He left home when he was seven. He says he got tired of being continuously hit by his parents. He returned home when he was 13, but “I have an older brother who had also run away before me and has not returned,” he says.

“It’s a hard life out there,” he says, reflecting on the realities of the street child experience. “You cannot imagine what a seven-year old goes through on the streets of Karachi – he is harassed by street gangs and the police. Many are abused physically as well as sexually.” Ali also confesses to having smoked hashish.

At the same time, the lure of a life free from family restrictions, poverty, school and housework is enough to make many want to continue where they are, Maqbool points out.

“We are trying to make them realise what it means to live within the folds of a family. Just like in sports, a family is like a team where each member takes care of the other and helps make the team a success. At the same time, parents too have to realise that these children need love, affection and respect. Both sides have to overcome their past and move on,” says Maqbool. (END)