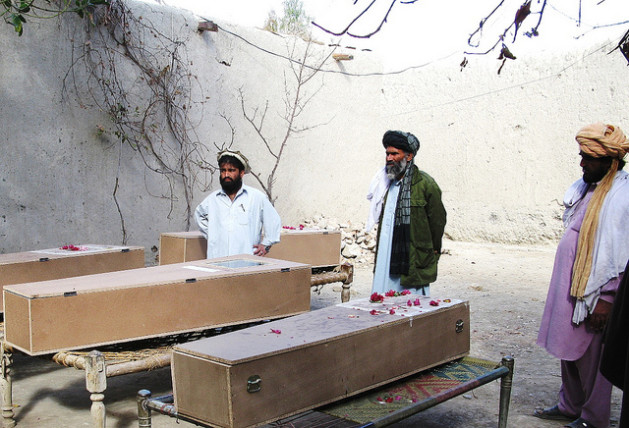 UNITED NATIONS, May 11 2013 (IPS) - Adding fuel to a long-simmering dispute between the U.S. and Pakistan, a Peshawar High Court declared CIA drone strikes illegal on Thursday, referring to such attacks in Pakistan’s tribal belt as “war crime(s)”.

The court called for its nation’s “use of force, if need be” to prevent further civilian deaths from U.S. drone strikes. It also ordered Pakistani delegates at the U.N. to bring forth the issue with the Security Council, where Pakistan is currently a non-permanent member.

“Because the administration has been so opaque, a left-right coalition running from Code Pink to Rand Paul has now spoken out against the drone programme.” -- Harold Hongju Koh

Chief Justice Dost Muhammad Khan, who presided over the case, cited a litany of broken international laws and agreements, ranging from the U.N. Charter to the U.N. Millennium Declaration and the Geneva Conventions. He also called for the U.S. government to redress Pakistani civilian victims of U.S. drone strikes, and for U.N. Secretary General Ban Ki-moon to establish a war crimes tribunal to investigate further injustices.

However, Masood Khan, the permanent representative of Pakistan to the U.N., did not address the topic of U.S. drone strikes in his statement on counterterrorism to the Security Council today, despite the Peshawar ruling.

Philip G. Alston, a former U.N. Special Rapporteur on extrajudicial, summary or arbitrary executions, told IPS, “There is an important symbolism in the findings of the Peshawar Court.”

Alston applauded the court’s determination to highlight the fact that the U.S. Central Intelligence Agency’s (CIA) drone strikes are inconsistent with international law. However, he noted, the legal reasoning behind the ruling was not “impeccable”.

“I doubt that either the (U.S.) or Pakistani governments will be moved by the far-reaching orders issued by the court,” he said, “but the message being sent is nonetheless an important one.”

Muhammad Khan’s sweeping judgments on May 9 came two days before his country’s presidential elections. Mirza Shahzad Akbar – a legal fellow at Reprieve and a Pakistani lawyer who defended victims in the Peshawar case – referred to the High Court’s decision as a “landmark judgment”.

He stated in a press release, “This judgment will also prove to be a test for the new government: if drone strikes continue and the government fails to act, it will run the risk of contempt of court.”

In 2010, Akbar assisted the U.S. Federal Bureau of Investigations (FBI) in a terrorism case involving a Pakistani diplomat. But their relationship turned sour when Akbar and his legal charity, the Foundation for Fundamental Rights, decided to sue the CIA for launching a drone strike on Mar. 17, 2011 that killed a group of Pakistani civilians.

When Akbar planned a trip form Pakistan to New York in June 2011 to speak at Columbia Law School, the U.S. State Department initially refused to grant him a visa.

In February 2013, U.S. President Barack Obama pledged in his State of the Union address to make his counter-terrorism strategy – including the “targeting, detention, and prosecution of terrorists” – more legally accountable and transparent.

Asked if Obama had held true to his words, Brett Kaufman, the National Security Fellow at the American Civil Liberties Union’s (ACLU) National Security Project, told IPS, “No. Despite repeated promises from President Obama and the new CIA director John Brennan and the Attorney General Eric Holder during a hearing before the Senate, the (Obama) administration has not taken any efforts to increase transparency.”

Asked if there was any pressure from the legislative or judicial branches to curb executive powers over U.S. targeted drone strikes, Kaufman said, “I think the best example of legislative pressure came before and during the confirmation hearing for John Brennan, the CIA director.”

He explained, “At the same time, there was the leak of the white paper to NBC News. In the wake of all of that, the government released an official version of the white paper and granted access to two committees in the Senate to view the actual underlying Office of Legal Counsel memoranda that authorised the killings of U.S. citizens by the executive branch.

“After the confirmation of Mr. Brennan… there hasn’t been nearly as much legislative pressure,” he said.

Johnson, the former general counsel for the Department of Defence, entertained the idea of establishing a “national security court” or a “drone court” during his Mar. 18 keynote address at the Center on National Security at Fordham Law School.

“The problem is that the American public is suspicious of executive power shrouded in secrecy,” he said. Johnson noted, however, the many complications of creating of such a court to oversee executive power in counterterrorism operations.

Koh, a former legal adviser to the U.S. Department of State who defended Obama’s drone policy in 2010, addressed CIA drone strikes at the Oxford Union in the U.K. on May 7. He admitted that the Obama administration “has not done enough to be transparent about legal standards and the decision-making process that it has been applying.”

Koh added, “Because the administration has been so opaque, a left-right coalition running from Code Pink to Rand Paul has now spoken out against the drone programme.” Koh noted that the lack of transparency is the core issue, rather than the drone strikes per se.

Asked if the CIA has improved its transparency measures for drone strikes, Alston, the John Norton Pomeroy Professor of Law at New York University School of Law, said, “Unfortunately, the terms CIA and transparency cannot realistically be used in the same sentence.  Like other intelligence agencies, it is dedicated to the highest possible level of opacity, not transparency.  That is the very reason why it should not be carrying out lethal operations.”