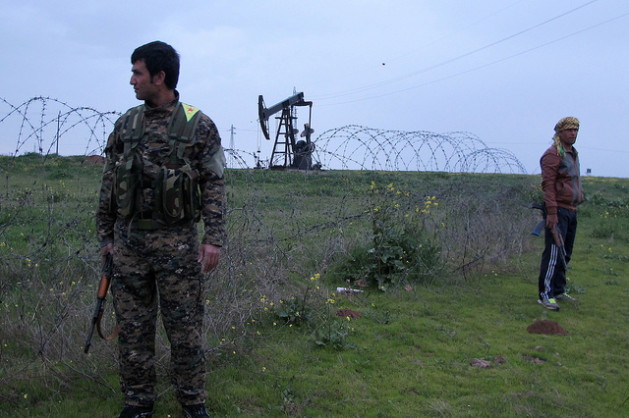 WASHINGTON, May 8 2013 (IPS) - Ten years after right-wing and liberal hawks came together to push the U.S. into invading Iraq, key members of the two groups appear to be reuniting behind stronger U.S. military intervention in Syria.

While the liberals appear motivated by a desire to stop the violence and prevent its spread across borders, their right-wing colleagues, particularly neo-conservatives, see U.S. intervention as key to dealing Iran a strategic defeat in the region.

“…[T]he most important strategic goal continues to be to defeat Iran, our main adversary in the region,” according to Tuesday’s lead editorial in the Wall Street Journal.

“The risks of a jihadist victory in Damascus are real, at least in the short-term, but they are containable by Turkey and Israel,” the editorial asserted. “The far greater risk to Middle East stability and U.S. interests is a victorious arc of Iranian terror from the Gulf to the Mediterranean backed by nuclear weapons.”

The immediate impetus for the reunion between the country’s two interventionist forces seems related primarily to charges that Syrian security forces have used chemical weapons in several attacks on insurgents and growing fears that the two-year-old civil war is spilling over into and destabilising neighbouring countries.

Those fears gained greater urgency this week when Israeli warplanes twice attacked targets close to Damascus and reports surfaced that Lebanon’s Hezbollah has sharply escalated its role in actively defending the regime of President Bashar al-Assad.

Both developments appear to have emboldened hawks here, particularly neo-conservatives who have sought for more than two decades to make the overthrow of the Assad dynasty in Damascus a major priority for U.S. Mideast policy and now see the conflict in Syria as a proxy war between Iran and Israel.

War-weariness and public disillusionment with U.S. interventions they championed in Iraq and Afghanistan, as well as President Barack Obama’s oft-expressed reservations about the wisdom of engaging in yet another war in a predominantly Muslim country, had kept the neo-conservatives and other right-wing hawks at bay.

But a combination of an ever-climbing death toll, Hezbollah’s increased involvement, the rise of radical Islamist groups within the insurgency, and the initial –albeit yet to be confirmed — estimates by U.S., Israeli, and Western European intelligence agencies that Assad’s forces have used chemical weapons, as well as Obama’s apparently offhand public warnings during last year’s election campaign that such use would cross a “red line”, have propelled some prominent liberals – most recently, New York Times columnist Bill Keller and former senior Obama policy official Anne Marie Slaughter — into their camp.

Led by the Wall Street Journal and William Kristol’s Weekly Standard, the neo-conservatives remain the most aggressive among the hawks in their advice, just as they were in the run-up to the Iraq war.

Thus, providing weapons to selected rebel groups – an option which the administration is considered most likely to exercise if the evidence of chemical weapons use by government forces is confirmed – is no longer considered sufficient.

“At this stage, (a better outcome of the conflict), this would require more than arming some rebels,” according to the Journal editorial. “It probably means imposing a no-fly zone and air strikes against Assad’s forces.

“We would not rule out the use of American and other ground troops to secure the chemical weapons,” the editorial writer added in a notable deviation from assurances offered by the hawks’ two most prominent Congressional champions – Republican Sens. John McCain and Lindsay Graham – who, in deference to public opinion, have said repeatedly that putting U.S. “boots on the ground” should be off the table.

This echoed Kristol’s own editorial in the Standard published on the weekend. Arming the rebels, he wrote, “could well be too little, too late. …It’s hard to see what a serious response would be short of direct American engagement – perhaps a combination of enforcement of a no-fly zone and aerial attacks. And no serious president would rule out a few boots on the ground…”

He called for Obama to “disable the runways of Syrian air bases, including the international airport in Damascus; …[u]se naval assets to impose a no-fly zone over western Syria; …[s]upply the Free Syrian Army with heavy military equipment, including armored personnel carriers and light tanks; [and b]e prepared to seize and remove Syria’s chemical weapons stockpile, even if it means putting boots (temporarily) on the ground.”

Liberal hawks have been less precise about what needs to be done, but their sense of urgency in favour of escalating U.S. military intervention – beginning with supplying the rebels with weapons – appears no less intense.

Slaughter, who served for two years as former Secretary of State Hillary Clinton’s policy planning chief and, as an influential Princeton University international-relations professor, urged U.S. intervention in both Iraq and Libya, published an op-ed in the Washington Post that warned that Assad’s alleged use of chemical weapons in Syria brought forth the spectre of the Rwandan genocide.

“For all the temptation to hide behind the decision to invade Iraq based on faulty intelligence about weapons of mass destruction, Obama must realize the tremendous damage he will do to the United States and to his legacy if he fails to act,” she wrote, without prescribing precisely what he should do.

Keller, who described himself as a “reluctant hawk” in an influential 1,500-word op-ed on the eve of the 2003 Iraq invasion, provided somewhat more detailed advice in 1,300-word, very prominently placed op-ed entitled “Syria is Not Iraq” Wednesday in which he quoted Slaughter, among other liberal hawks.

“The United States moves to assert control of the arming and training of rebels – funnelling weapons through the rebel Supreme Military Council, cultivating insurgents who commit to negotiation an orderly transition to a non-sectarian Syria,” he wrote.

“We make clear to President Assad that if he does not cease his campaign of terror and enter negotiations on a new order, he will pay a heavy price. When he refuses, we send missiles against his military installations until he, or more likely those around him, calculate that they should sue for peace.”

Keller, who several years after the Iraq invasion offered a somewhat muted apology for supporting that war, stressed that he did not “mean to make this sound easy,” but stressed that a disastrous outcome “is virtually inevitable if we stay out [of the conflict]. …Why wait for the next atrocity?” he asked.

“Iraq should not keep us from doing the right thing in Syria…,’’ according to the op-ed’s subhead.