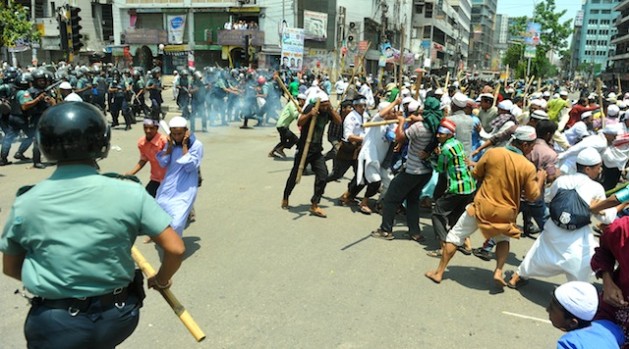 DHAKA, May 8 2013 (IPS) - Adding to a long list of domestic woes, including a factory collapse that left hundreds dead last month, Bangladesh is now grappling with a wave of violence that threatens to deepen the gulf between secular sections of society and religious fundamentalists.

Earlier this week at least 27 people were killed on the streets of the capital, Dhaka, as police clad in riot gear clashed with Islamic hard-liners calling for radical changes to the country’s constitution.

“We have not witnessed violence of this magnitude since the Liberation War in 1971." - Shyamal Dutta, editor of the leading Bengali newspaper ‘Bhorer Kagoj'
Sparked by a massive rally organised by the religious group Hifazat-e-Islam (Protectorate of Islam) on Sunday, May 4, the violence left hundreds injured with bullet wounds, fighting for their lives in hospitals across the city.

Chanting “Allahu Akbar” (God is great), the nearly 100,000 demonstrators wielding bamboo sticks and banners demanded implementation of the Hifazat’s 13-point programme, which calls, among other things, for the execution of “atheists” or anyone accused of blaspheming the Prophet Muhammed.

Aware of the group’s plans, the government had requested Hifazat leaders to postpone their mass rally in light of the national tragedy that occurred on Apr. 24, when a building in the Dhaka suburb of Savar housing several factories collapsed, leaving over 800 dead.

Undeterred by a daily mounting death toll from the Rana Plaza catastrophe, the worst garment sector disaster in history, the group pushed ahead with what it called the “Dhaka Seize”, cutting off access to all six entry-points into the capital and occupying all the main thoroughfares.

Witnesses to the street battles, which carried on into Monday, say protestors vandalised buildings, torched scores of businesses and looted shops, all the while chanting anti-government slogans.

Shyamal Dutta, editor of the leading Bengali newspaper ‘Bhorer Kagoj’, described the violence as a veritable “war against the state”.

“We have not witnessed violence of this magnitude since the Liberation War in 1971,” he told IPS, referring to the bloody independence struggle that resulted in the secession of what was then East Pakistan from the Islamic Republic of Pakistan, leaving at least three million dead, by the most conservative estimates.

Ever since the creation of Bangladesh as a sovereign state, this Muslim majority country of 160 million has been governed by a secular constitution.

Dutta believes Hifazat-e-Islam, an alliance of about 12 religious groups, is now seeking to dismantle the pluralism that has for years been enshrined in the constitution and “destroy the nation’s social, cultural and democratic values”.

Other demands on the group’s 13-point agenda include bans on anti-Islamic “propaganda” (in the form of social media) and the “intermingling” of men and women in public spaces, as well as mandatory religious education from primary to higher secondary levels.

Though the group claims to uphold the Islamic faith, many religious scholars like Moulana Ziaul Ahsan, president of the Bangladesh Sammilita Islamic Jote, have denounced their actions as “unconstitutional”.

Soon after the official rally ended late Sunday night, police tried to disperse the crowds, but activists hailing mostly from madrashas (religious schools) refused to clear the streets until the government agreed to implement a new anti-blasphemy law.

While many eyewitnesses say the protestors provoked police reprisals by throwing homemade explosives, bricks, stones and sticks, other sources claim the government must be held accountable for deploying the elite Rapid Action Battalion (RAB) police force and the paramilitary Border Guard Bangladesh (BGB) with instructions to “shoot to kill”.

“I have never seen such violence before,” Kajul Hazra, a photojournalist who has 22 years of experience working in Bangladesh, told IPS, adding that over 12,000 police were dispatched to quell the riot.

Police Spokesman Masudur Rahman told the press on Monday that his men were “forced” to use “rubber bullets, tear gas and sound grenades to control the violence.”

But human rights advocates say the decision to fire on unarmed protestors amounts to a violation of democratic principles.

“They (the police) fired on the demonstrators late at night, into the darkness, which was really cruel,” Farida Akhter, a leader of the United Women’s Forum, told IPS, adding that such actions “are those of a dictator government and completely unacceptable in a democratic society.”

A visibly shaken public sees the incident as a frightening reminder of the deep divisions in the political sphere.

According to Rokeya Prachy, a prominent social activist, Hifazat enjoys the support of the main opposition Bangladesh Nationalist Party (BNP), as well as the Jamat-e-Islami, whose leaders are currently being tried for war crimes allegedly committed on behalf of the West Pakistan military junta during the 1971 Liberation War against pro-independence activists.

In February and March, tens of thousands of civilians took to the streets when the International Crimes Tribunal of Bangladesh failed to mete out the long-anticipated death penalty to former Jamat leader Abdul Quader Mollah.

Hifazat and its supporters have called attention to the discrepancies between the government’s acceptance of the anti-Jamat rallies earlier this year – popularly known as the ‘Shahbag protests’– and its violent response to this week’s Hifazat march.

Others say the different government tactics were based on the nature of each protest, with the demonstrations in Dhaka’s Shahbag Square being peaceful sit-ins, compared to the Hifazat’s vandalism and aggression.

“Why should the government’s actions (on Sunday and Monday) be termed undemocratic when security forces acted to protect the lives and properties of innocent people?” asked Abul Barkat, chairman of the economics department at the University of Dhaka, in an interview with IPS.

“I think the police were very careful in their operation to save lives,” he said.

Political parties, meanwhile, have fallen back on the usual blame game: at a press conference at the BNP’s Dhaka branch Monday, spokespeople for the opposition accused members of the ruling Awami League of instigating the violence, a claim the latter has stoutly denied, insisting that the BNP and its ally, the Jamat, were behind the chaos.

While political leaders pointed fingers, the violence quickly spread to the southern city of Khulna, to Sylhet in the north-east, Rajshahi in the north-west and to the southeastern port city of Chittagong, where a day-long clash with law enforcers left at least seven people including one police officer dead, with over 50 people still suffering from severe bullet wounds.