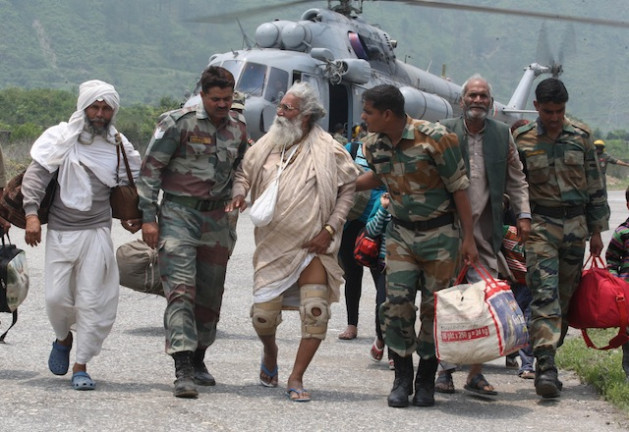 The Indian Defence Force rescues a pilgrim after the floods in the northern state of Uttarakhand. Credit: Sujoy Dhar/IPS

NEW DELHI, Jun 27 2013 (IPS) - On the outskirts of Rudraprayag, a town in the northern Indian state of Uttarakhand whose many temples draw tourists and Hindu pilgrims with magnetic force, visitors often stop for a meal at a popular hotel built right on the river Alakananda.

One of the two head streams of the Ganga, the holy lifeline of India that gushes from the Gomukh snout of the massive Gangotri glacier in the Himalayas, Alakananda is revered as a goddess.

A night in the hotel is cheap, and budget tourists from home and abroad come here for the breathtaking view from balconies overlooking the mountains and glaciers that comprise 90 percent of the state.

As idyllic as it sounds, this hotel unwittingly played a role in one of the worst natural disasters the state has ever seen when, on Jun. 15, flash floods caused by a cloudburst and glacial leaks swept thousands of unsuspecting pilgrims away in what scientists are now referring to as a ‘Himalayan tsunami’.

The state’s chief minister said Thursday that the death toll could exceed 1,000, with 300 bodies found just this morning buried beneath silt beside the largest temple in the town of Kedarnath.

Countless tourists were trapped for days in pitiable conditions until the Indian Defence Force came to their rescue in one aerial sortie after another.

Thousands are still missing and many towns and pilgrimage sites remain inaccessible, as the raging waters carried away whole strips of roads, along with homes, shops and hapless victims.

As the government scrambles to complete a haphazard rescue operation, environmentalists are taking a step back, pointing out that the disaster was not simply a freak natural hazard but a result of unbridled development in the Land of the Gods.

For years, a booming tourist industry, made possible by thousands of illegally constructed guesthouses, has spawned massive hydroelectric power projects on the rivers, while other infrastructure development designed to accommodate hoards of visitors has proceeded at a steady clip, putting undue stress on this fragile ecological zone.

Scientists also say the damming of the Ganga, riverbed encroachment and mining activities are wreaking havoc on the region.

“There (have been) no credible environmental or social impact assessments for hundreds of projects,” Himanshu Thakkar, coordinator of the South Asia Network on Dams, Rivers and People, tells IPS.

According to Mallika Bhanot, member of Ganga Ahvaan, a public forum to save the holy river, about 244 dams are being constructed along the water channel, while only three were cancelled after a 100-km stretch, from the glacial mouth of Gomukh to Uttarkashi town, was declared an eco-sensitive zone (ESZ) in December 2012.

“Even that notification by the government in New Delhi has been opposed by the Uttarakhand government,” Bhanot tells IPS, despite the fact that it was designed after a thorough assessment of the topography, and with the intention of preserving human lives in a landslide-prone zone.

Frightening footage of the recent disaster captured multi-storey buildings collapsing into the river like a pack of cards, while cars, bridges and shops were easily swept into the vortex. Activists say all of this could have been prevented if the state government had heeded the call to cease construction and encroachment on the riverbed.

The New Delhi-based Centre for Science and Environment (CSE) has also traced the link between the disaster and the manner in which development has been carried out in this unique region.

Acknowledging the economic importance of energy generation, CSE Director-General Sunita Narain questions whether or not “the Central or state government ever considered the cumulative impact of the hydropower projects on the rivers and the mountains.”

“Currently, there are roughly 70 projects built or (slated to be built) on the Ganga, expected to generate some 10,000 megawatts (MW) of power,” she told IPS.

She referred to this model as “bumper to bumper development”, with one project immediately following another.

Diversion channels and reservoirs will affect 80 percent of the Bhagirathi, the Ganga’s second head stream, and 65 percent of the Alakananda, Narain stressed. During the dry season, large stretches of the river will be completely dry.

Such activities, she said, are fantastically lucrative for developers, making it next to impossible for small environmental groups to have their voices heard.

“There is a strong construction lobby in Uttarakhand,” said Bhanot, adding that many politicians’ election funds come directly from hydropower projects.

Narain says this particular disaster cannot be attributed solely to climate change, but the growing trend of intense and extreme weather events – particularly a heavier, more unpredictable monsoon – is undeniable.

With climate change widely acknowledged to be the result of the burning of fossil fuels and emission of excessive carbon dioxide into the atmosphere, it is clear that the ongoing tragedy is human-induced, Thakkar said.

The glacial lake outburst flood (GLOF) that poured down the mountains bringing boulders and rocks is just another sign that the delicate balance of nature’s forces has been disrupted – and Uttarakhand is paying the price.

Tourism may form the backbone of Uttarakhand’s economy, but it is now clear that visitors and pilgrims number too many: according to government data, 42.2 million domestic tourists and 227,000 foreigners flocked to Uttarakhand in 2012.

Those numbers are expected to double by 2017, with the state gearing up to welcome 77.7 million domestic travelers and nearly 400,000 foreigners.

These arrivals will be accompanied not only by increased human waste and pollution from transport, but also by endless construction of hotels and the justification of ever more mega development projects.

Experts like Thakkar insist that the sector be regulated based on a proper scientific assessment of the region.

This will not be easy, since tourism brings much-needed revenue to the state. The government estimates that each tourist spends an average of 38 dollars a day, much of which goes directly to the government via entrance fees for religious sites.

But while this income from “religious and cultural tourism is a lifeline for many, it will not be sustainable…(unless) all development activities take into account the vulnerability of the area,” Thakkar says.

The youngest mountain range in the world, the Himalayas are already prone to erosion, landslides and seismic activity.

“Development cannot come at the cost of the environment in any region of the country; but particularly not in the Himalayas,” Narain stressed.