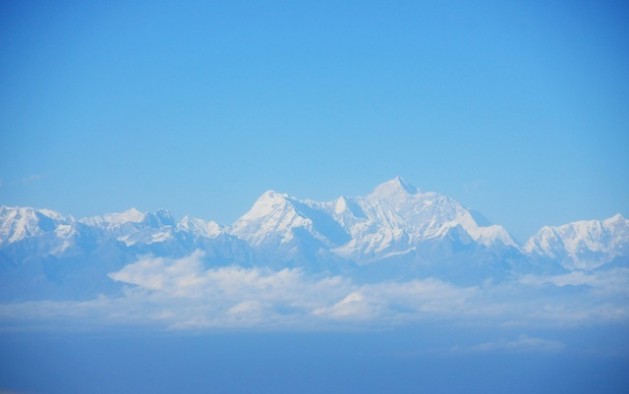 Experts warn that climate change is responsible for melting glaciers on the Himalayas. Credit: Amantha Perera/IPS

JHIRPU PHULPINGKATT, Nepal , Jun 2 2013 (IPS) - Residents of Jhirpu Phulpingkatt, a village nestled in the foothills of the Himalayas, about 110 km from Nepal’s capital Kathmandu, are on red alert.

As the impacts of climate change batter the towering mountains above them, these villagers on the banks of the Bhote Koshi river have started to dread the sound of incoming text messages, which may carry evacuation warnings.

Their fears are not unfounded. Research conducted by experts from the University of Milan shows that the snowline in the Everest region of the Himalayas, also known as the Khumbu region in the northeast of Nepal, has receded by 180 metres in the last 50 years, while glaciers have shrunk by 13 percent.

Last week all eyes were on the Himalayas’ highest peak – 29,000-foot Mt. Everest, whose summit is bisected by the China-Nepal border – in honor of the 60th anniversary of the first human ascent of the mountain.

But the momentous occasion presented as much cause for panic as for celebration, when images showing bare rock jutting out from under the receding ice caps called attention to the rapidly changing face of this majestic range.

Sudeep Thakuri, who led the Italian team of researchers, told IPS that the continuous and increased melting is most likely caused by rising temperatures, which were 0.6-degrees Celsius higher this year than they have been in previous years.

Together, the two phenomena have led to the proliferation of massive glacier lakes – melting ice held back by natural dams of moraine and debris – that could spell disaster for those living in the rocky ravines down below.

Avalanches, erosion, heavy water pressure and even snowstorms could cause glacial outbursts, “releasing millions of cubic metres of water in a few hours (resulting in) catastrophic flooding downstream”, according to a study by Germanwatch, an NGO dedicated to sustainable development.

Glacier lake outbursts are not uncommon, and over the last century scientists have recorded at least 50 incidents of these icy lakes breaking their dams. One of the most devastating incidents occurred when the Sangwang Cho glacial lake in Tibet burst in 1954, flooding the cities of Gyangze (located 120 km downstream), and Xigaze (about 200 km away).

Now experts warn that the lakes are filling up faster than ever before and new lakes are being created at an alarming rate.

“If climate warming continues, as is predicted, accelerated glacial thinning and retreat are likely,” Pradeep Mool, programme coordinator at the International Centre for Integrated Mountain Development (ICIMOD) in Kathmandu, told IPS, warning that “the danger posed by glacial lake outburst floods will increase.”

According to ICIMOD research, there are over 20,000 glacial lakes in the Hindu Kush Himalayas, stretching from Afghanistan in the west to Myanmar (formerly Burma) in the east.

The Dudh Kosi river basin in eastern Nepal is home to 278 glaciers, some of which are receding at a rate of 74 metres annually. Mool told IPS that the region is now home to 34 lakes, including 24 recent formations, of which ten have been tagged as potentially dangerous.

Mool warned that earthquakes also pose a serious threat. “The Hindu Kush Himalaya region is one of extreme seismic instability. Earthquakes could act as major triggers for glacial lake outbursts,” he stressed.

There has been at least one reported lake outburst in the last 500 years in the Seti Khola region that was triggered by seismic activity, the scientist said. That outburst produced a 50-metre-high debris field in the western region of Pokhara.

According to Thakuri, the future wellbeing of glaciers is largely dependent on the climate, adding that much more concrete scientific research is required to determine possible outcomes.

But those living in the Himalayan foothills, like the villagers of Jhirpu Phulpingkatt, say there is evidence enough of the possible disasters to come.

The steep mountain walls in this village, mostly covered in lush vegetation, are frequently disrupted by deep cave-ins caused by earth slips that follow heavy rains.

At the small power plant that lies just next to the Bhote Koshi river, officials rely on a warning system to give residents adequate notice to escape any lake outbursts.

However the plant’s acting manager, Janak Raj Pant, told IPS that the warning would only give an escape window of between six and 10 minutes, and extends only to the Nepali border, which is just 10 km from the plant. But many of the glacial lakes that could impact this village and others lie in Chinese-controlled Tibet, where the warning system does not reach.

ICIMOD’s Mool told IPS there is an urgent need for better monitoring of lakes and their water levels. He pointed to a few isolated examples in which outlets have been cut into the dams of some glacial lakes in Nepal and Bhutan to let out excess water, but Mool said such preventive action needed be more uniform.

There is also an economic imperative to take action, at least in the Bhote Koshi valley, where Nepali authorities are planning to build at least four new power plants on the river.