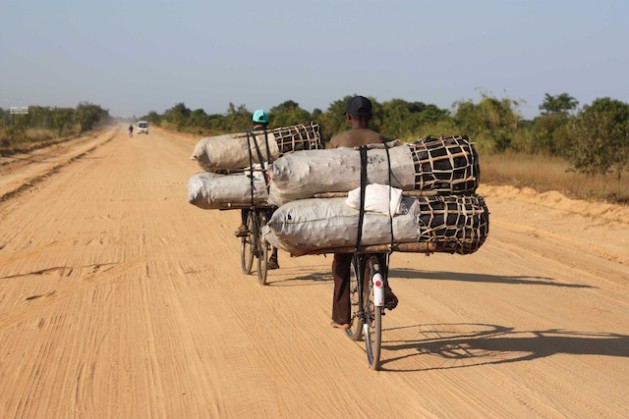 MAPUTO, Jun 28 2013 (IPS) - Mounds of sand and rubble are what are left of sections of Maputo’s beachfront road as bulldozers, manned by Chinese construction workers, tear up the road that is being rebuilt. Southern Africa is under construction and the reminders are everywhere.

Amid the dust and earth-moving equipment, delegates from across the southern African region are gathering in the Mozambican capital Jun. 27-28 at the Southern African Development Community (SADC) Infrastructure Investment meeting to try to galvanise the funding needed for an ambitious cross-border infrastructure network that will help make the region globally competitive.

Over the next 15 years SADC wants to set in motion an extensive revamping of existing infrastructure as well as building new logistics, including hydro-dams, power transmission lines, roads and railways, while boosting internet connectivity and broadband access across the region.

An estimated 64 billion dollars are urgently needed to fund the first phase of an “Infrastructure Master Plan” SADC adopted at a 2012 summit in Maputo and wants to start putting into motion. Over the next 15 years the total cost of infrastructure projects could run to 500 billion dollars.

“This number can be frightening, but if we do not invest now we will jeopardise our trade capacity,” SADC secretary-general Tomaz Salomao admitted. “We have decided to do it now.”

How SADC will raise money to fund what is needed is the big question. Several countries have already set aside big amounts for infrastructure; South Africa committed 400 billion dollars in 2012. Regional integration is an obvious way to cut the cost of doing business for everyone.

For development financiers like the Development Bank of Southern Africa, the assurance that governments are prepared to work together on major cross-border projects is half the battle won.

“For us as bankers that is a critical part. When we look at projects the first thing we look at is, does it have sponsor support from various governments? If you have that, you have ticked a major box,” the general manager of the Development Bank of Southern Africa’s Project Fund, Mohale Rakgate, told IPS.

Malawi, Angola and Tanzania have yet to be connected to a common power pool, the Southern African Power Pool, set up by national electricity companies in 1995 to create a common market for power in the region. Bringing them in forms part of SADC’s short-term infrastructure development goals.

Southern Africa is better placed than ever before to be able to finance its more ambitious dreams. Countries in the region have been remarkably resilient in the face of the global economic slow-down. According to the International Monetary Fund (IMF), the region registered robust growth of 5.1 percent in 2012, which could accelerate to 5.4 percent this year.

Demand for the region’s commodities is partially driving growth, according to the IMF.

But that is only part of the story. Southern Africa is more politically stable than it has been for decades, young people are increasingly taking advantage of new economic opportunities – particularly those presented by information technology – and prudent fiscal policies by governments have helped buffer countries from the crisis and helped build up foreign reserves

“These countries now have quite a lot of capacity to raise debt. The question is how much and how sustainable is it?” Graham Smith, programme manager for Trademark Southern Africa, a United Kingdom-funded programme to help boost regional integration, told IPS.

An obvious source of infrastructure funding is the African Development Bank. Infrastructure already makes up over 30 percent of its portfolio, but governments and the bank alone are not up to the task of raising the kind of finance that is now needed.

The bank is in the process of setting up the “Africa 50” fund that it hopes will be able to leverage some 100 billion dollars to finance infrastructure on the continent. The timing for the initiative is right, according to the bank. Quantitative easing in Europe and the United States will make infrastructure investments in the developing world more attractive.

“You are looking at mid-single to double-digit returns over a long period of time such as for roads or power projects,” the African Development Bank’s regional director Ebrima Faal told IPS.

Investment will not only come from outside, but from the continent itself, Faal believes.

Beyond development financing, SADC is setting a great deal of store in building what it calls “public private partnerships”.

In Mozambique, the lack of rail infrastructure is hampering a coal rush in the northeastern Tete province. Brazilian coal company Vale had little choice but to finance the revamping of an old rail track through Malawi and down to a deep-water port on Mozambique’s coast, in order to get its coal out. The company said it would spend 6.5 billion dollars on railway and port construction.

“Sometimes people think it is easy. It is not easy. For each dollar we invest in our mine we have to invest another in infrastructure to enable the project to be feasible,” Vale’s chief executive officer in Mozambique, Ricardo Saad, said.

Thanks to Vale’s line, landlocked Malawi will be able to move its goods more easily to the coast as extra capacity is reserved for passengers and goods. And the line offers possibilities of linkages to Zimbabwe and Zambia.

The region’s rail network is a mishmash of poorly maintained, insular systems that need to be painstakingly revamped and connected to each other for development corridors to become realities.

And concessionaires are seldom prepared to take all the risks involved in building infrastructure unless they are involved in high-yield activities like coal mining.

“Ports and power projects are the most likely to attract public-private partnership because you can ring-fence a long-term revenue stream,” said Smith. Much of the rest, he added, “will be public-sector financed.”

China’s deepening role in the infrastructure sector was a matter not widely discussed in Maputo. The Asian giant already has a 20 percent market share of infrastructure contracting, according to a 2012 report by business consultants Ernst & Young. Chinese loans for infrastructure are growing and in 2011 close to 15 billion dollars in Chinese commitments were secured for infrastructure projects continent-wide.

“We are considering collaborating in transport and power projects. It is a big market from a business point of view,” Jon Lee from China’s Development Bank told IPS. The bank’s presence in Maputo was the only sign of a real and burgeoning Chinese engagement on the continent.

“We are going to engage China big time,” SADC’s director of infrastructure and services, Remmy Makumbe, told IPS. “Our only concern about China is that it is mostly involved in bilateral arrangements rather than regional arrangements. We don’t have a problem as long as they engage in bilateral projects that address a regional framework.”