The urgent task of reducing dangerous levels of air pollution in large urban centres cannot be achieved without proper monitoring and measurement of air quality. 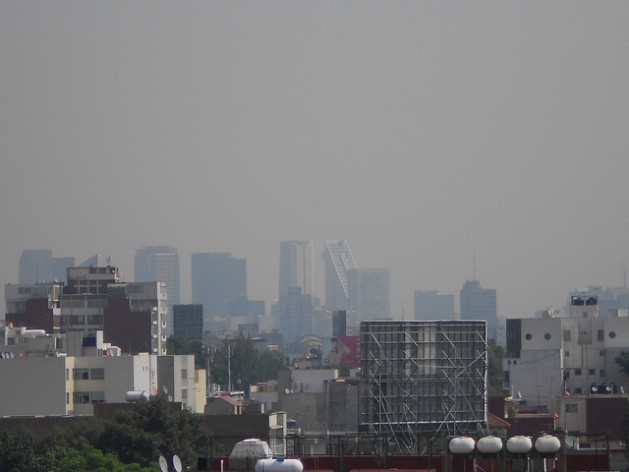 A neighbourhood in southern Mexico City, where visibility is limited because of the smog. Credit: Emilio Godoy/IPS

MEXICO CITY, Jun 23 2013 (IPS) - Mexican cities with populations of more than 500,000 face serious obstacles in monitoring air quality and reducing air pollution, but as of July local authorities will be required to do both, and to submit mandatory reports on their efforts to the federal government.

The new requirements that will soon enter into effect were approved by the Mexican government last year, in an attempt to tackle the urgent task of reducing levels of air pollution in urban areas, yet many local governments are still ill equipped to comply with them.

According to experts consulted by Tierramérica*, the main difficulties stem from a lack of financial resources as well as the human resources needed for the adequate operation of the monitoring and measurement instruments involved.

Existing monitoring networks “do not work as well as one would hope,” said Ricardo Torres, a researcher from the Centre for Atmospheric Sciences at the public National Autonomous University of Mexico.

“There has been no support from state governments, who do not view environmental health and air pollution as priorities,” Torres told Tierramérica.

Half of Mexico’s 118 million inhabitants are distributed across 32 cities with populations of 500,000 or more, and a number of these cities have no environmental monitoring systems in place.

The country’s large cities are facing growing problems due to the high levels of ozone, sulphur dioxide, carbon monoxide, nitrogen dioxide and coarse particulate matter (PM10) generated by fossil fuel consumption and industrial activities such as hydrocarbon processing and cement production. These lead to serious impacts on both the environment and human health.

“You can’t improve something that hasn’t been measured. The only way to improve the situation is by knowing the conditions in each city. But the monitoring system is not regulated, and the main obstacles in this regard are economic,” said Gerardo Moncada, an air pollution specialist from the non-governmental organisation El Poder del Consumidor (Consumer Power).

Mexico has 28 networks for the measurement of air quality, but only 18 of them provide valid and reliable information, Moncada told Tierramérica

The National Air Quality Information System encompasses more than 80 air quality monitoring stations, but its data must be validated to comply with the regulations.

“It is crucial to monitor air quality, but there is a lack of commitment to doing it well, due to the shortages in equipment and trained personnel,” said activist Agustín Martínez of Bicitekas, a civil society organisation devoted to promoting bicycle use.

According to the World Health Organization, air pollution causes the premature death of more than 14,700 Mexicans a year.

Since 2009, the federal government has invested some 15 million dollars in the installation of pollution monitoring and measurement stations. While the equipment used in the stations costs roughly 38,000 dollars, the largest expenditure goes towards the operation and maintenance of these instruments.

These include the updating of regulations on clean fuels, polluting emissions and other aspects of air pollution; the elimination of fuel subsidies; the reduction of motor vehicle use in metropolitan areas; the improvement of urban public transportation; and the strengthening of air quality monitoring programmes.

The National Institute of Statistics and Geography, a government agency, estimates the environmental costs of air pollution at more than 40.5 billion dollars.

“There is a need for inter-municipal coordination, because there are significant traffic flows in metropolitan areas. This is a macro problem, which means that strategies to control the problem should not be local,” said Torres.

Torres is preparing to publish the findings of a research study on the flow of air pollutants from sources like industry and transportation through the area comprised of the federal capital, Mexico City, and the neighbouring states of Mexico, Morelos, Hidalgo and Puebla. He is also conducting similar research on the effects of this pollution on the region’s vegetation.

So far this year, Mexico City has issued at least six air pollution alerts, during which people are advised to refrain from physical activities outdoors. This number of alerts is not common in the country’s other big cities, however.

“Reporting needs to be done in real time, hour by hour, for each pollutant, and a historical record needs to be kept. And obviously, efforts to measure and reduce air pollution must be undertaken simultaneously,” stressed Moncada.

The governments of the states in central Mexico, around Mexico City, have already created the Metropolitan Environmental Commission to address issues like those mentioned above and to work towards joint solutions. Similar entities need to be established in other large urban areas, the experts say.

The report “Air Quality in Latin America: An Overview”, published in March and updated in May by the U.S.-based Clean Air Institute, stresses the need for more effective monitoring and measurement of air pollution levels in the region.

“There are no standardized monitoring techniques or data collection or averaging protocols across the region. There is also limited evidence for quality control or assurance activities ensuring optimum data quality,” adds the report, which analysed the levels of five different pollutants in 42 major Latin American cities.

“We need this issue to be on the public agenda and to be actively discussed. The authorities now have our proposal, which could be used as a starting point,” said Martínez.