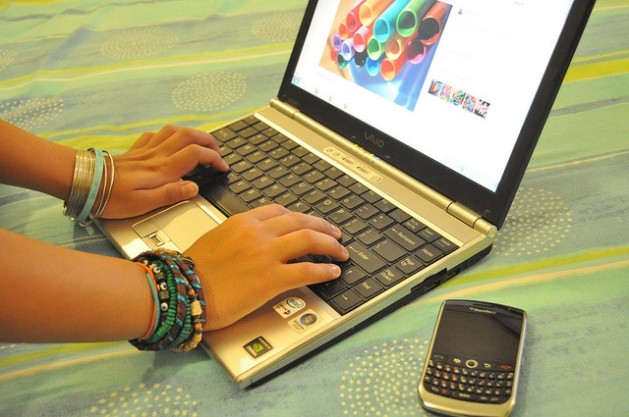 Women in India are using the Internet to break taboos on female sexuality. Credit: Zofeen Ebrahim/IPS

KOLKATA, India, Jun 11 2013 (IPS) - When 30-year-old Rita Datta (not her real name) decided on a whim to take a computer literacy course, she fell through the metaphoric looking glass into a virtual reality where the most taboo subject in India was transformed into the most simple and natural topic of conversation: sex.

A housewife in the eastern Indian state of Kolkata, Datta says the Internet has helped her find answers to questions she never felt comfortable articulating. In the vast and anonymous world of cyberspace, she has interacted with thousands of women who, like herself, are finally overcoming the stigma attached to women’s sexuality.

“Now I can talk about my needs, my body and my feelings, which I have never done before,” she told IPS.

With over 137 million Internet users, India has the third largest number of active users, after China and the United States, although penetration remains low. But that is changing: while urban netizens made up 77 percent of users a decade ago, recent research indicates that 34 percent of those trolling the net today come from towns with fewer than 500,000 people.

In a country where a woman is thought to be raped every 28 minutes, and over 50,000 reports of child rape were recorded between 2001 and 2011, experts say silence has perpetuated a culture in which violence against women is not only tolerated but even encouraged.

Using the Internet to break this silence could have a tangible impact on the ground, they say.

Indeed, the gang rape of a young medical student on a moving bus in India’s capital, New Delhi, in December last year sparked widespread outrage over what activists are calling the country’s “rape epidemic”. Increasingly, women are using online forums to discuss violence, rape and an entrenched patriarchal culture.

Meanwhile, online dialogue on contraceptives is a godsend for women’s health advocates, who are struggling to cope with the fact that 22 percent of Indian girls become mothers before the age of 18 due to a lack of awareness and access to family planning services, while 50,000 women died during childbirth, many as a result of being too young to bear children.

The surperhighway has yet to penetrate the rural hinterland where 70 percent of India’s women live, and even in areas where connectivity is relatively easy to come by, it has taken women a long time to use online forums to subvert a sexually conservative culture, partly due to gender discrepancies in Internet literacy.

But according to Mumbai-based sociologist and feminist activist Manjima Bhattacharjya, women of a certain class are beginning to carve out nooks online where they can safely seek vital information about contraceptives, interact with people of the opposite sex “without the surveillance of society and express their own opinions on a range of issues, including sexual violence and harassment.”

Since sex education is virtually non-existent in Indian schools – with biology teachers skipping past chapters on reproduction, and textbooks prepared by authorised agencies being “recalled” for containing “objectionable content” – these forums are becoming more crucial than ever.

During a two-year research project called EROTICS (Exploratory Research on Sexuality and the Internet) conducted by the Association for Progressive Communications (APC), Bhattacharjya found that, compared to other countries studied during the 2008-2010 period – Brazil, Lebanon, South Africa and the United States – the subject was severely under-researched in India.

Still, she and a handful of academics, professors and activists have begun to unearth common trends that suggest the Internet is empowering women.

“I was particularly struck by the number of ‘mommy bloggers’ – middle class women who appeared to be actively and critically thinking about everything from child sexual abuse and reproductive rights to care work and the gendered division of labour,” Bhattacharjya told IPS.

She also pointed out that the Internet has created crucial fora for discussing gender and sexual orientation in a country that only decriminalised homosexuality in 2009, and where 73 percent of the population believes it should still be illegal.

She highlighted the case of a young man who was struggling with depression and the desire to be a female. It was not until he found information about gender dysphoria online that he finally sought professional help, shared it with his family, and underwent sex-change surgery.

“Now she has a blog online to help other people with gender dysphoria,” Bhattacharjya said.

Women activists have been quick to leverage the increasing number of female netizens for online campaigns.

The famous Pink Chaddi Campagin (Pink Underwear Campaign) – a non-violent protest movement spearheaded by the Consortium of Pub-going, Loose and Forward Women in response to an attack on female patrons in a pub in Mangalore, a city in the southern Indian state of Karnataka – used Facebook to rally some 40,000 female protestors back in 2009.

On Valentines’ Day of that year, the Facebook group called on supporters to send pink underwear to the office of the right-wing Hindu group, the Sri Ram Sena, whose leader had threatened to “take action” against unmarried couples found together that day. As hundreds of pairs of ‘chaddis’ flooded his office on Feb. 14, the politician was forced to enter into talks with the activists.

In the last few years the number of blogs dedicated to queerness, sexuality and gender identity has increased rapidly, with some directories recording over a hundred blogs dedicated to building networks and safe spaces for LGBT rights activists.

Malobika, founder-member of the Kolkata-based lesbian support group Sappho for Equality, says the advent of the Internet has been a salve for the loneliness created by intolerant social attitudes towards sexual identity.

Forced by such attitudes to live ‘underground’ until 2004, Malobika worked with six like-minded women to form the rights group in 1991. Today, she told IPS, Sappho is the only visible lesbian platform in Kolkata, a state of five million people, offering services like a helpline that receives roughly seven calls a day, and a resource centre frequented by academics and researches.

Still, Malobika was quick to point out the disadvantages of operating in cyberspace, where heterosexual men “curious about lesbians, transgenders and bisexuals” use false IDs to penetrate the online community.

Bhattacharjya echoed this warning, stressing that women face harassment, stalking and abuse online, much as they do in the real world. “Women are also acutely aware that every action online could be monitored, and so go out of their way to avoid behaviours that could affect their offline realities.”

Other obstacles impeding women’s access to cyberspace, according to Prabha Nagaraja, director of programmes at the Delhi-based TARSHI (Talking about Reproductive and Sexual Health Issues), include a lack of privacy to engage in sensitive issues, since most families share computers.

Cultural stereotypes also reinforce the false notion that women are somehow “technologically impaired”, resulting in many women, especially middle-aged and older women, shying away from the Internet as an alien or even hostile tool, said Bhattacharjya.

“On the other hand,” Nagaraja told IPS, “more and more smartphones have Internet available on them, making it easier for women to explore the virtual world.”

According to Mary Meeker, a partner at the investment firm Kleiner Perkins Caufield & Byers (KPCB), India will have 67 million smartphone subscribers by the end of 2013, recording a 52 percent growth rate from the previous year.