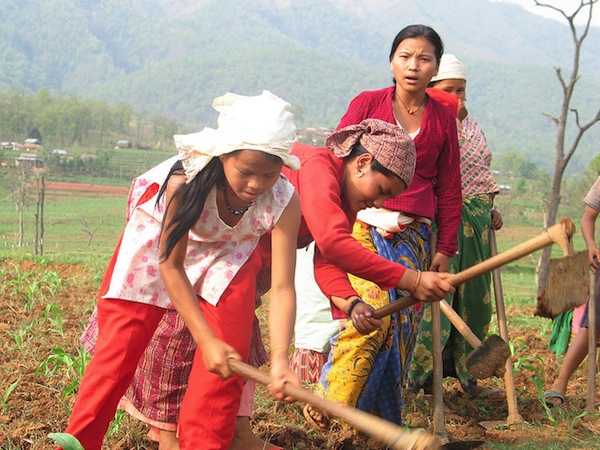 Ensuring that women, youth and other marginalised groups are employed is a challenge in combating poverty. Credit: Naresh Newar/IPS

UNITED NATIONS, Jun 19 2013 (IPS) - In the aftermath of the global economic crisis and with three years to go until the 2015 deadline of the Millennium Development Goals, global leaders are struggling to formulate a post-2015 agenda that can address the widespread dilemmas of employment and inclusive growth.

At a meeting attended by global leaders, ambassadors and civil society to discuss the post-2015 agenda last Friday, panellists agreed that better and more job opportunities are high priorities that must be included in the Millennium Development Goals (MDGs).

Created in 2000 at the Millennium Summit, the MDGs include eradicating extreme poverty, achieving universal primary education and improving maternal health.

Civil society leaders found the report too conservative, as it failed to properly address structural issues and income inequality.

To give experts a better understanding of global workers’ views on employment and growth, people were consulted through World We Want, an online platform.

The information they shared was “well-rounded and insightful”, Selim Jahan, director of poverty practice at UNDP, told IPS, and revealed civil society’s seemingly inherent, if surprising, understanding of the risks and issues at hand regarding jobs and growth.

Their ideas and comments reveal the myriad and complex issues people face in securing and keeping a job. One World We Want user, an executive assistant from Brazil, believed a more open dialogue about HIV/AIDS to be vital in job development.

“[There should be] government incentive for companies [and] tax deduction to hire HIV employees. We still suffer [from] prejudice. We still need to keep this disease as a secret to maintain the job,” the user, who remained anonymous to protect his or her identity, said.

For another user from India, renewable energy was an integral part of future development.

Strong population growth presents a huge challenge for future job creation. With the world labour force growing by 40 million people a year, according to the report, 470 million new jobs will have to be created from 2016-2030 to keep up with the demand for work.

Engaging women, youth and other marginalised groups in employment is another difficulty, with a huge gender disparity in some regions. In the Middle East and North Africa, the gaps are the biggest, with male employment at around 60 percent and female employment hovering around or below the 20 percent mark.

While bringing more women into employment could require a shift in cultural norms, the low numbers of employed women in the MENA region also has to do with the way data is collected, Martha Chen, international coordinator at Women in Informal Employment: Globalising and Organising (WIEGO), told IPS.

“In the MENA region, it may also be the case that there are a lot of women doing home-based work and other forms of [paid] employment that do not get captured in the official statistics,” Chen added. “So the gap may not be as big as we think, but the problem may be that women’s work is not being fully captured.”

“I think there [are] probably a lot of women in their homes doing something for the market, not just for subsistence,” Chen noted.

Youth are not the only ones who will be vying for future jobs. An aging population means that older people will also be looking for work.

“Job training, education, jobs, these are all issues important to older people. We don’t just stop living when we reach age 60,” said James Collins, U.N. representative of the International Council on Social Welfare and chair of the Committee on Aging in New York.

“As governments raise the retirement age, it’s very important that at the same time, they improve access to employment for older people who want to work,” Collins added.