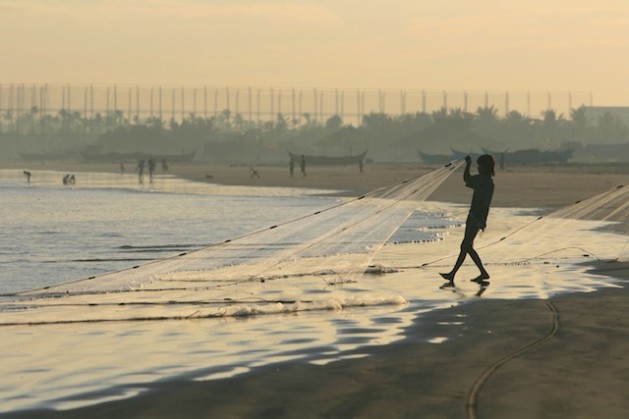 MAHACHAI, Thailand, Jun 11 2013 (IPS) - Next time you visit Walmart and throw that packet of frozen shrimp in your shopping cart, pause a moment.

The shrimp would most likely have travelled from Thailand, the world’s top exporter of seafood since 2004, where reports of abuse of migrant workers have recently cast an unflattering shadow over the industry.

A Jun. 6 briefing report by the Washington-based International Labour Rights Forum highlighted child and worker rights violations at Narong Seafood, one of Thailand’s leading seafood factories and one of Walmart’s top suppliers.

Narong Seafood’s principal shrimp processing facility is located in Samut Sakhon or modern Mahachai, a central Thai province that is home to over 6,000 seafood factories.

This fishing and factory town at the mouth of the Tha Chin Klong River, which empties into the Gulf of Thailand, also hosts a huge percentage of the estimated 2.5 million migrant workers who underpin much of Thailand’s burgeoning economy.

Burmese comprise 82 percent of these migrants, while the rest come mostly from Laos (8.4 percent) and Cambodia (9.5 percent).

U Aung Kyaw was among those fleeing military rule, a crumbling economy and a lack of job opportunities in Myanmar (formally Burma). He came to Thailand looking for work in 1998 and soon found himself in Mahachai, working at a seafood factory.

It was here that he first experienced labour abuse and vowed not only to educate himself about his rights but also to advocate improved conditions for his fellow workers.

One of the few workers willing to speak to the press, U Aung Kyaw heads the Burmese-led Migrant Worker Rights Network (MWRN).

He told IPS that smaller processing factories “force workers to work overtime for less pay. The legal minimum wage is 300 baht (roughly 10 dollars) per day and overtime is 56 baht (about two dollars) per hour, but they usually pay 50-100 baht (about 1.5 to three dollars) overall, and no overtime.”

“Most workers are confined to the compound in these factories. Often, they are locked up and their documents confiscated to prevent them from escaping.”

This is especially true in smaller factories, which handle the shrimp peeling for larger enterprises, where “shifts start at four a.m. and finish late at night,” according to U Aung Kyaw.

Allegations of worker abuse are nothing new to the sector. One indictment came as recently as May 29 this year, when a report by the London-based Environmental Justice Foundation (EJF) entitled ‘Sold to the Sea’ documented the case of 15 Burmese migrant workers who claimed that they were subjected to forced detention, bonded labour and physical abuse while being employed on Thai fishing ships.

Another report by the International Organisation for Migration (IOM) in 2011 titled ‘Trafficking of Fishermen in Thailand’ documented cases of migrant fishermen who were forced to work for years without pay.

Meanwhile, labour rights activists who attempt to expose the dark side of this lucrative industry risk severe reprisals from a strong business community anxious to maintain positive international trade relations, and present an untarnished view of the sector to the outside world.

Especially in small factories, where individual owners can easily police the workforce, attempts to organise workers, or expose violations, have been met with police crackdowns or attacks by gangs.

“We were beaten up and experienced a lot of physical harassment,” said U Aung Kyaw, who began collecting data and reporting abuses to the Labour Rights Promotion Network in Mahachai several years ago, before finally launching MWRN in 2009.

Getting workers to speak out is tough because many are undocumented and fear reprisals. Activists recently pilloried the National Verification Programme for charging “extortionist” prices for work permits, pushing many migrant into a kind of bonded servitude.

Twenty-seven-year-old Win Sein, hailing from the Tanintharyi Division in southeast Myanmar, was forced to pay his broker 223 dollars when he arrived here seven years ago. To pay off the massive bill, he landed a job at a tuna processing factory in Mahachai.

The fisheries sector is not the only one to have come under fire.

A 2012 report by the Finnish research NGO Finnwatch revealed how basic human rights were being grossly violated at the pineapple processing company Natural Fruit, which supplies pineapple concentrate to Refresco, the bottle manufacturer that controls an estimated 20 percent of the European private label soft drink and fruit juice market.

Finnwatch reserved a large part of its indictment for Refresco, saying it too is partly responsible for the exploitation of migrant workers. Finnwatch research coordinator Henri Purje said that companies like Refresco, which raked in 1.22 billion euros in revenues in 2010, compromised labour rights in an effort to maintain competitive prices.

He told IPS that since labour costs only comprise a tiny percentage of the price of the end product, paying decent wages and abiding by the International Labour Organisation (ILO)’s guidelines will hardly impact the company’s bottom line.

The problem, as Purje sees it, “is that the international chains that buy from Thai producers put fairly strict conditions on their suppliers, making it difficult for suppliers to pay minimum wage.”

For the moment, Refresco has reportedly stopped sourcing from Natural Fruit, and the company, owned and operated by the brother of Thailand’s Democratic Party Secretary-General Chalermchai Sri-On, has filed a 10-million-dollar lawsuit against the co-author of the Finnwatch report, British migrant specialist Andy Hall, for “criminal defamation.”

For the last decade, Hall has exposed systematic abuses of migrant workers in Thailand and has worked closely with foreign consumers and diplomatic missions to develop a strategy of corporate social responsibility that might make life easier for migrant workers.

He told IPS he has also been working closely with the Myanmar government, on whose shoulders the responsibility of protecting migrant workers falls.