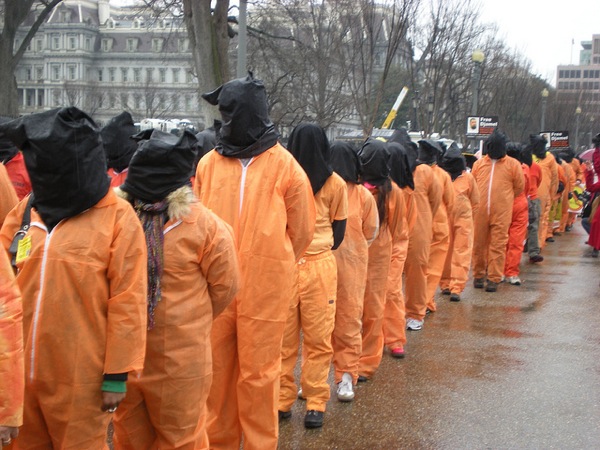 Protesters outside the White House in January 2012 demonstrate against torture and indefinite detention on the 10th anniversary of the opening of Guantanamo Bay. Credit: Charles Davis/IPS

That optimism is due in part to the language of this year’s proposed U.S. National Defence Authorisation Act (NDAA), a massive annual appropriations bill that funds much of the U.S. military and is currently being debated in Congress.

“It feels like there is momentum building toward achieving a bipartisan consensus,” Dixon Osburn, director of the law and security program for Human Rights First, a Washington advocacy group, told IPS. “I’m certainly more optimistic on this than I have been for the last several years.”

In its current form, the 2014 NDAA would give the executive branch, through the secretary of defence, greater authority to remove detainees from the prison, either to transfer them to other facilities or to release them altogether. It would also unblock transfers of detainees to the United States.

The NDAA recently passed through the Senate Armed Service Committee with the provisions related to Guantanamo left intact. These provisions, which would help pave the way for an eventual shutdown of the prison, are expected to be the subject of fierce debate when the Senate votes on the full bill sometime in the coming months.

The current push to close the controversial detention centre is being spearheaded by a renewed pledge made by Obama in late April. At that time, the president spoke in no uncertain terms against the continued existence of the facility, which he had originally pledged to close down at the start of his first term, in 2009.

"It's not sustainable…the notion that we're going to continue to keep over 100 individuals in a no-man's land in perpetuity."
-- U.S. President Barack Obama

“It’s not sustainable…the notion that we’re going to continue to keep over 100 individuals in a no-man’s land in perpetuity,” Obama stated in April, noting that U.S.-led wars in Iraq and Afghanistan have been or are being wound down. “The idea that we would still maintain forever a group of individuals who have not been tried – that is contrary to who we are, it is contrary to our interests, and it needs to stop.”

Since that renewed call, powerful members of Congress, both Democrats and Republicans, have come out forcefully in favour of supporting Obama’s efforts to close down the prison. Earlier this month, Senators John McCain and Dianne Feinstein (the former a Republican and the latter a Democrat) joined White House Chief of Staff Denis McDonough on a trip to Guantanamo, afterward releasing a statement advocating its termination.

“We continue to believe that it is in our national interest to end detention at Guantanamo, with a safe and orderly transition of the detainees to other locations,” the statement noted. “We intend to work, with a plan by Congress and the administration together, to take the steps necessary to make that happen.”

There are currently 166 detainees being held indefinitely at the detention centre in Guantanamo, 86 already determined eligible for released. Due to concerns over where to send them, however, they remain stuck in the prison.

Fifty-six of the 86 inmates cleared for release (and nearly 100 of the 166) are originally from Yemen, a country believed to contain a heavy presence of al-Qaeda affiliates. Previously, a moratorium had been in place preventing repatriation to the country, but last month Obama announced he would lift that moratorium.

Many of the inmates waiting for release are currently being force-fed, following a mass hunger strike that began in February to protest their continued detainment.

“Those who have been cleared are sitting there waiting for the political stalemate to end,” says Osburn.

In addition to human rights concerns, Osburn notes the “exorbitant” costs of holding individuals at Guantanamo. He cites expenses as totalling 1.6 million dollars per detainee per year, a sum much larger than the average cost of holding prisoners in high-security facilities in the United States, which is around 50,000 dollars per year.

Obama’s original pledge to close the prison actually came before he was elected president, in 2008, when he promised that the detention centre would be shuttered within a year of his taking office. Largely due to opposition from Congress, however, the president has failed to follow through on this promise, disappointing human rights advocates.

“We took the president at his word the last time around,” Andrea Prasow, a senior counterterrorism counsel for Human Rights Watch, an international watchdog group, told IPS. “I want to believe it is different this time, but I won’t until I see action.”

Nevertheless, Prasow, too, was “quite hopeful” that action of some kind would be taken on the renewed pledge. She noted that Obama likely views the issue as an important part of his legacy.

“[Obama] is a young president, who will live a long time in this country and see the impact of his decisions,” she said. “Leaving office without having changed this situation would be a grave mistake.”