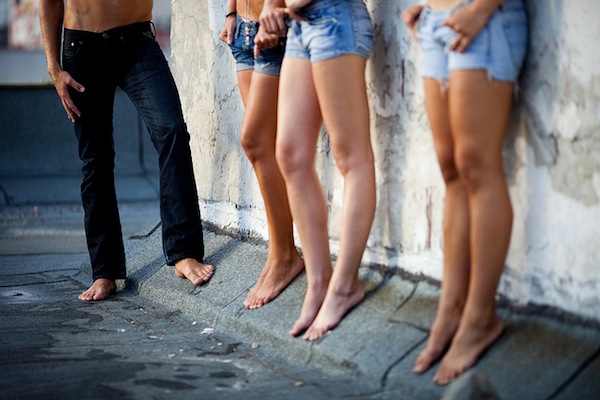 In June, New York state legislature will vote on a bill that will increase protection for sex trafficking victims. Credit: Bigstock

NEW YORK, Jun 13 2013 (IPS) - It started for Ruth when she was 12 years old and for Lowyal when she was 13. After being raped by her mother’s boyfriend, Ruth ran away from home and was picked up by a pimp, who sold her into prostitution.

Lowyal, bullied at school and facing a deteriorating situation at home, dropped out of school and eventually began working on the streets. In a drawing Lowyal created to depict this traumatic time in her life, a wide eye reflects a city skyline as red flames curl at the bottom, with menacing faces on both sides.

This month, New York’s legislature will vote on the New York Trafficking Victims and Protection and Justice Act (TVPJA), which would give more protection to girls like Ruth and Lowyal, and harsher punishments for those who trafficked them. It is part of the Women’s Equality Act that supporters hope will be voted on before the legislative session ends Jun. 20.

Equality Now, an international human rights organisation, is working with the Jewish Child Care Association and the New York State Anti-Trafficking Coalition to get the law passed.

The TVPJA will direct resources to toughening laws to target and arrest pimps and buyers rather than victims. And under the new law, penalties for buying sex from a minor will be similar to those for statutory rape.

The law would also mean that all prostituted persons under the age of 18 are treated as trafficking victims instead of criminals in the state of New York. Currently, 16- and 17-year-olds arrested for prostitution are prosecuted as adults.

“There are two provisions that we are having a hard time with and [are] getting opposition to,” Lauren Hersh, New York director of Equality Now, told IPS. Hersh is perplexed as to why these provisions are problematic.

"Sex trafficking is happening within New York City, and many of its victims are American-born."
-- Lauren Hersh

The first is making sex trafficking a violent felony in New York State, which would send a message to law enforcement that trafficking is a violent crime, Hersh explained.

“Talk to any sex trafficking victim, and they’ll tell you how violent it is,” she added.

The second is aligning New York state law with U.S. federal law, which does not require prosecutors to prove that minors were coerced into sexual acts. Under the current law, with most cases in New York, victims have to testify in court, Hersh said.

“The law needs to evolve,” Amick said. “Albany is letting politics get in the way of helping people,” she added, with state lawmakers who oppose these provisions working against the livelihoods and futures of sex trafficking victims.

Despite some opposition, Hersh sees the bill as “excellent and comprehensive”.

The fact that women and girls are being trafficked not only inside U.S. borders, but also within city limits, may be a surprise to some people, Hersh said.

“When people think of sex trafficking, they often only think of women and girls being smuggled across international borders. But sex trafficking is happening within New York City, and many of its victims are American-born,” Hersh said in a statement.

Legislative justice is one part of the solution. Sexually exploited girls like Ruth and Lowyal should also be given a voice in the process of advocacy and justice, Hersh said. Project IMPACT, a New York-based programme that allows trafficking victims to share their stories, if and how they choose to, is one way to do so.

“I think telling my story matters because it could help other girls like me,” Veronica, another formerly trafficked girl, said, after sharing her story at Project IMPACT. “Storytelling is important because I lived this – I’m the one who knows what it’s really like.”

Ruth, Lowyal and Veronica are part of Gateways, a residential treatment program for commercially sexually exploited youth that is run by the Jewish Child Care Association and allows them to rebuild their lives and self-esteem. Some Gateways residents visited Albany in May to lobby for the bill’s passing.

Reliable statistics on sex trafficking are difficult to obtain due to the hidden and underground nature of the crime, according to Hersh, but a 2010 State Department report put the number of people trafficked to the United States each year at around 15,000.

Two million children are exploited each year in the international commercial sex trade, according to 2012 data from the International Labour Organisation, which also estimates that women and girls make up 98 percent of sex trafficking victims.

And in the United States, while little data is available for the number of victims, the FBI estimates that 293,000 American children and teenagers are at risk of becoming victims of commercial sexual exploitation.

“The only way we’re going to have justice in New York is to pass this bill in its entirety,” Hersh told IPS.