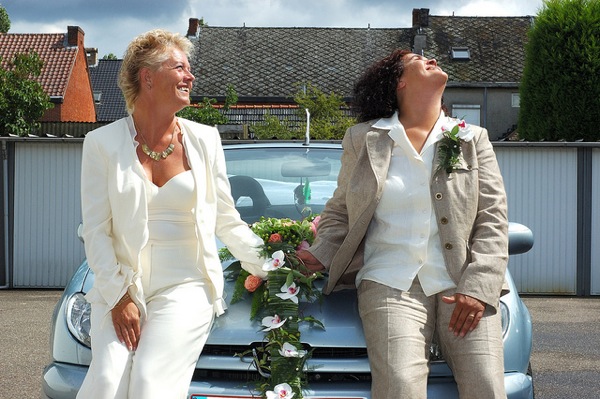 WASHINGTON, Jun 27 2013 (IPS) - Large crowds cheered outside the U.S. Supreme Court here on Wednesday morning as the justices inside announced their majority decision that a key part of two-decade-old federal legislation banning same-sex marriage is unconstitutional.

Cheering supporters held signs reading, “The people united will never be defeated.” When the decision was read, they began chanting, “DOMA is dead,” referring to the so-called Defence of Marriage Act (DOMA), legislation that for 17 years has disallowed federal recognition of same-sex couples, even as state legislatures have begun to recognise such unions.

In a 5-4 decision, the Supreme Court struck down DOMA and simultaneously required the extension of federal benefits to legally married same-sex couples. In a separate decision, the court also dismissed Proposition 8, a state law in California, effectively allowing same-sex marriage in that state.

“Today’s decision not only gives federal recognition and respect to the many married same-sex couples in the U.S.,” Graeme Reid, the director of the lesbian, gay, bisexual and transgender (LGBT) Rights Program at Human Rights Watch, an international advocacy group, told IPS. “More fundamentally, it also affirms that LGBT people are deserving of fundamental rights and equal protection in all areas of the law.”

“Under DOMA, same-sex couples have their lives burdened, by reason of government decree, in visible and public ways,” Justice Anthony Kennedy wrote for the majority. “By its great reach, DOMA touches many aspects of married and family life, from the mundane to the profound.”

President Bill Clinton originally signed DOMA into law in 1996, though he has since recanted his support of the legislation. Clinton’s view on the issue mirrors a broader cultural shift throughout the United States, with analysts suggesting that public opinion on same-sex marriage has changed faster than on almost any other issue in memory.

“The laws of our land are catching up to the fundamental truth that millions of Americans hold in our hearts,” President Barack Obama stated in response to Wednesday’s rulings. “When all Americans are treated as equal, no matter who they are or whom they love, we are all more free.”

Obama himself is a good example of the shift in U.S. popular views on the subject, having announced his support for same-sex marriage only last year.

Still, Wednesday’s court decision was narrowly split, with several of the dissenters suggesting that the court didn’t have jurisdiction to hear the case in the first place, similar to the decision on Proposition 8. Justice Antonin Scalia even read his dissenting opinion from the bench, which is done in a small number of cases, typically when the opinion is very strong.

“In the majority’s telling, this story is black-and-white: Hate your neighbor or come along with us.  The truth is more complicated,” Scalia wrote. “It is hard to admit that one’s political opponents are not monsters, especially in a struggle like this one, and the challenge in the end proves more than today’s Court can handle.”

While the crowd waited Wednesday morning for the second decision, on California’s Proposition 8, a protestor put up a sign that read “Gay Mormon for Marriage Equality”.

“For those of you who don’t know, 10 years ago today a [judicial] decision came down in Lawrence v. Texas, allowing us to be gay,” he said. “And in 15 minutes, we’ll find out if we are considered equals.”

In a 6-3 ruling in 2003, the Supreme Court struck down the sodomy laws in Texas and invalidated these laws in 13 other states, making same-sex sexual activity legal in every state.

When it was announced, the Proposition 8 decision was also split 5-4, yet essentially the justices decided that they did not have the power to make a full ruling on the case. Proposition 8 banned same-sex marriage in California based on the results of a state-wide referendum in 2008.

In effect, however, the decision is a boon for supporters of same-sex marriage. It allows to stand a 2010 injunction made by a federal district court that sough to prevent the state of California from enforcing Proposition 8, stating that the law violated due process of law and equal protection.

“The Court does not question California’s sovereign right to maintain an initiative process, or the right of initiative proponents to defend their initiatives in California courts,” Chief Justice John Roberts wrote for the majority on the Proposition 8 case. “But standing in federal court is a question of federal law, not state law.”

Despite the fact that the justices decided not to offer a full ruling on Proposition 8, critics of the law rejoiced.

“This is truly a day for the history books,” Roberta Kaplan, a lawyer who argued the case at the Supreme Court, said following the decision, “one that will be marked by future generations as a giant step forward along our nation’s continuing path towards equality.”

Though noisy opposition was noticeably absent from the rally at the Supreme Court, not everyone was pleased with Wednesday’s decisions.

“Kennedy’s decision is not law,” Maggie Gallagher, a fellow at the American Principle Project, a conservative advocacy group, said in a release. “It is Justice Kennedy’s moral values written into our Constitution, and interfering with our rights as Americans to pass laws that accord with our values on marriage.”

Tim Wildmon, president of the conservative American Family Association, similarly said he was deeply saddened by the decision in a country founded on “biblical principles”. “Our next line of defense is to vigorously protect our religious liberty.”

“Now what needs to happen is [gay] Americans in the other 37 states need to have the same rights that all Americans get: To marry the person they love and have full, equal rights,” Neil Sroka, the communications director for Democracy for America, an advocacy group close to President Obama, told IPS.

“Our supporters and members are ready to hit the ground running.”