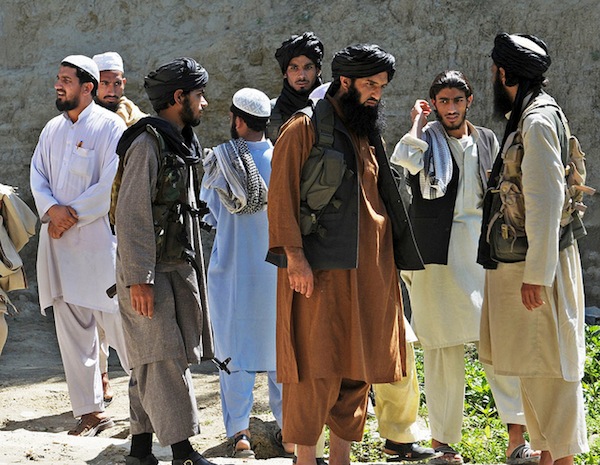 Peace talks between the United States and the Taliban are due to begin later this week in Qatar. Credit: Ashfaq Yusufzai/IPS

WASHINGTON, Jun 19 2013 (IPS) - Nearly 12 years after the United States ousted the Taliban from power, the White House announced Tuesday that the United States will begin formal talks with the militant Islamist group in Qatar later this week as part of Afghanistan’s national reconciliation process.

The announcement, which coincided with ceremonies marking the formal transfer of primary security responsibility from U.S.-led NATO forces to their Afghan counterparts, preceded a statement issued shortly afterwards by the Taliban itself in which it implicitly disassociated itself from Al-Qaeda.

The Taliban “would not allow anyone to threaten the security of other countries from the soil of Afghanistan”, Muhammad Naim, a Taliban spokesman, said in a televised broadcast from Doha. In addition, he pledged that the group seeks “a political and peaceful solution” to the conflict.

“These are two statements which we’ve long called for and together, they fulfil the requirements for the Taliban to open…a political office in Doha for the purposes of negotiation with the Afghan government,” said a senior official in a background teleconference for reporters.

“These statements represent an important first step towards reconciliation, a process that, after 30 years of armed conflict in Afghanistan, will certainly promise to be complex, long and messy, but nonetheless, this is an important first step,” said the official, who spoke on condition of not being identified.

He also called on the Taliban and the U.S.-backed government of President Hamid Karzai to begin direct negotiations “soon”.

"There will be a lot of bumps in the road."
-- U.S. President Barack Obama

Speaking at the G8 Summit in Northern Ireland, President Barack Obama also described the opening of the Taliban office an “important first step towards reconciliation” but stressed that “there will be a lot of bumps in the road”.

He also said Washington remained “fully committed to our military efforts to defeat Al-Qaeda and to support the Afghan National Security Forces (ANSF)”.

Critics of the U.S. military effort hailed Tuesday’s announcement as signalling a major change in policy in advance of the deadline at the end of 2014 for the withdrawal of virtually all foreign troops from Afghanistan.

Most experts in Washington believe that at most 10,000 U.S. troops – plus about 4,000 more from other NATO countries – are likely to remain beyond that date as trainers for Afghan forces and as counter-terrorist units focused on preventing the return of Al-Qaeda forces.

“The U.S. and Karzai know they have to cut a deal with the Taliban and that the Taliban cannot be defeated militarily,” said William Goodfellow, director of the Centre for International Policy (CIP) here.

“The problem for the last 11 years is that it’s the (U.S.) military that’s been running the show, and to the military, negotiations equals defeat. We’re now shifting away from a policy of wanting to defeat the Taliban militarily to one of finding a political solution,” he said.

Tuesday’s developments – both the transfer of security responsibility to Afghan forces and the announcement of U.S.-Taliban talks – come amidst indications of eagerness by both the White House and Congress to wind down Washington’s commitment to Afghanistan as quickly as possible.

Just last week, a majority of the Republican-led House voted for the first time to approve a bipartisan amendment to the defence authorisation bill in favour of accelerating Washington’s troop withdrawal from Afghanistan.

The amendment, which was adopted by a 305-121 margin, also deleted a provision of the bill that had supported a continued U.S. military presence after 2014, replacing it with a call for the administration to seek explicit Congressional approval for retaining any U.S. troops there after that date.

About 66,000 U.S. troops remain in Afghanistan – down from a high of around 100,000 two years ago following two “surges” sent by Obama as part of an ambitious counter-insurgency (COIN) strategy overseen by General David Petraeus.

The administration is currently engaged in a major internal debate over the pace of withdrawal for the remaining troops before the 2014 deadline and how many troops Washington will retain in Afghanistan after that date.

The latter question presumes that Karzai – or whoever succeeds him after the 2014 presidential election – wants them and provides the necessary guarantees, including the thorny issue of immunity from criminal prosecution, to keep them there.

The Pentagon and its supporters want to keep as many troops there for as long as possible, including next year’s “fighting season”, which lasts from late spring into the fall. They believe that that U.S. forces can still deal major blows to the Taliban – thus weakening its position in any negotiations – and are still badly needed to back up the ANSF.

Though 352,000 strong and more battle-tested than two years ago, the ANSF suffers serious weaknesses in a range of areas, including air support and an annual attrition rate of about 30 percent. The United States and its allies have said they will continue spending more than 4 billion dollars annually to help maintain, supply and expand the ANSF after 2014.

Obama, who had described the Afghanistan conflict as a “war of necessity” during his 2008 presidential campaign, initially deferred to Petraeus but reportedly became increasingly disenchanted with COIN’s effectiveness.

As early as two years ago, Secretary of State Hillary Clinton announced the administration’s support for direct negotiations with the Taliban.

But despite a series of informal meetings with Taliban representatives hosted by various European countries and Qatar, the State Department proved unable to wrest control of policy from the Pentagon and its supporters in Congress.

Other key actors, including Karzai himself, the Pakistani military, which is believed to exert considerable influence if not outright control over key Taliban leaders, and more hard-line factions within the Taliban, also opposed talks at various times.

U.S. officials who briefed the press said they believed that the Taliban Political Commission in Doha is fully authorised by all factions of the movement and its leader, Mullah Omar, to conduct negotiations.

The officials also stressed that talks between the United States and the Taliban would likely be limited in scope and that negotiations between the Taliban and the Karzai government, as represented initially by the High Peace Council, were far more important. They said they expected the Council to send representatives to meet with the Taliban several days after the U.S.-Taliban talks.

“I think that given the level of distrust among Afghans, it’s going to be a slow process to get that…intra-Afghan dialogue moving,” said one. “The United States will encourage and help facilitate that, but the talks are largely going to be paced by the success or failure in that dialogue, and so I wouldn’t be looking for early results.”

“There is no guarantee that this will happen quickly, if at all,” added another.

In addition, Washington, they said, would only sign a final accord if the Taliban met three conditions: “First, that they break ties with Al-Qaeda; that they end the violence; and that they accept Afghanistan’s constitution, including its protections for women and minorities.”

While the Taliban’s statement about not permitting Afghan territory to be used to threaten the security of other nations moved partway toward meeting the first condition, they said, the Taliban would have to be more explicit to fully satisfy it.