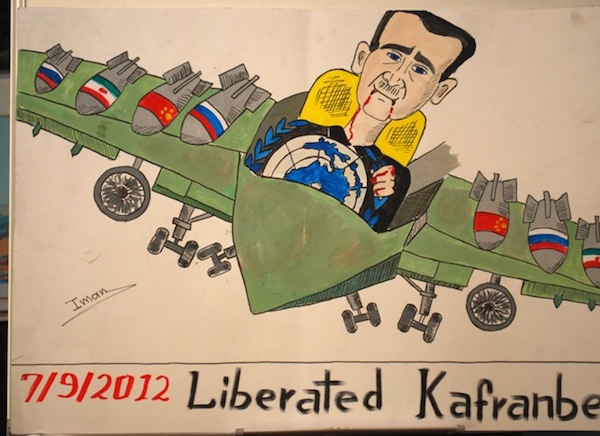 UNITED NATIONS, Jul 4 2013 (IPS) - For the small town of Kafranbel in Syria, the old saying “a pen is mightier than a sword” still rings true. Every week in Kafranbel, protesters draw posters, write banners and demonstrate against the regime of Syrian President Bashar al-Assad.

In a twist, however, hundreds of such posters and banners are finding their way to the United States through activists’ efforts to ensure that this evidence is preserved for future generations.

Shadi Latta, a doctor based in Illinois, received the first 100 posters in February. The next set had about 20 posters, and he expects about 100 more soon, according to Latta, who was born and raised in Kafranbel.

The posters are smuggled out of Syria and stockpiled in Turkey before being shipped to the United States, Latta said, adding that taking them out of the country was probably the only way to preserve them.

With the raiding of major cities and demolition of historical sites, experts say that Syria’s cultural heritage is under threat as war rages between the rebels and Assad’s forces.

For those in Kafranbel, the posters and banners are becoming an integral part of Syria’s history and as such must be preserved for future generations, said 41-year-old Raed Fares, who was behind the idea.

"This was a way for us to reach out to the international community and get our message out there."
-- Raed Fares

“Under constant shelling and bombing, you never know when you could lose all of these,” said Fares, who is based in Kafranbel. “We thought that it is better to ship them to the U.S. so that they are safe. Also, this was a way for us to reach out to the international community and get our message out there.”

Latta has been helping Fares in this endeavour by displaying the posters in the United States, with exhibitions held in Indianapolis, Chicago and Atlanta, as well as in other areas.

Reactions have been emotional, but sometimes people are simply surprised, said Latta. Written in both Arabic and English, the posters are witty and unapologetic. “That is what people like about them,” he said.

Latta’s personal favourite is a picture of Assad in a famous pose from the movie “Titanic”.

Though the original posters are not for sale, duplicates are made for people who want to buy them, said Latta.

The plan is to organise an exhibition in New York by the end of July. So far the exhibitions have managed to raise 650,000 dollars, which is going towards humanitarian aid in Syria, he added.

Creating these posters and getting them to the United States is no easy task, however.

It all started when Fares, who was studying medicine at Aleppo University, teamed up with Ahmad Jalal, an artist who agreed to create posters back in 2011.

When Fares and Jalal initially began their work, Kafranbel was still a battlefront, Fares recollected.

The duo would draw the posters in a makeshift tent a few miles away from Kafranbel. “Assad’s men knew we were doing it,” said Fares, who eventually dropped out of college. “They burned down our houses and destroyed all the buildings in the area. But since we were hiding they couldn’t arrest us. That is why we are still alive.”

With the Assad regime closely monitoring every anti-Assad chant or protest, demonstrators would immediately burn the posters after the protests, recalled Fares.

“But we realised that this was part of our history, and we should preserve them instead of destroying them,” Fares said. They soon began burying posters after every demonstration, until Fares realised that nearby Turkey would be the safest place to store them.

Posters were being smuggled out of Kafranbel, across  Syria’s border and into Turkey, and they are now being shipped to Latta’s home in the U.S. state of Illinois.

“When I would get the posters here, there would be particles of soil stuck on them,” Latta said. “Some of them would be moist, simply because they were buried for such a long time.”

Later, when Kafranbel, which has a population of just under 20,000, fell into the hands of the rebels, Fares and Jalal set up their own office in the town.

The “media centre” is now their official space where they carry out their work. Equipped with generators and laptops, the centre is also home to foreign journalists who arrive at Kafranbel. As an activist, Fares now films demonstrations and tries to spread awareness about the real situation in Syria.

“We are just peaceful protestors who are fighting against oppression,” Fares said. He doesn’t identify himself as a rebel or a fighter but emphasises that the people of Kafranbel are on the rebels’ side.

For those like Latta who are part of the Syrian diaspora, everyday reports of violence are unnerving. Latta’s in-laws are still in Syria, while some of his family members have left the country.

The United Nations estimates that the death toll in Syria since March 2011 has reached nearly 93,000. Still, Latta and Fares are hopeful, believing that victory will be theirs and Assad’s end is near.