Haitian Women Still Waiting for a Seat at the Table 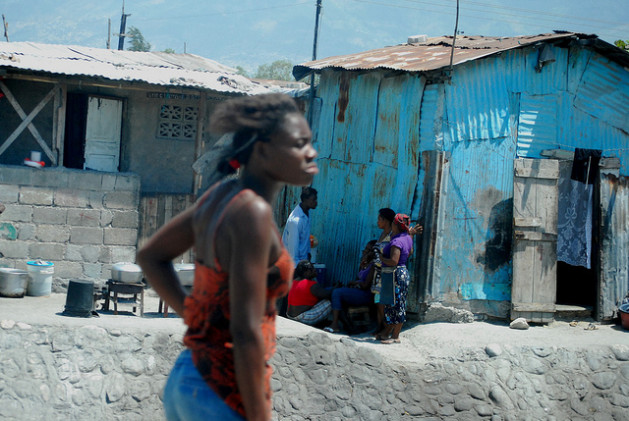 Haitian women's participation in national life, especially in politics, is essential to strengthen democracy and the rule of law. Credit: Valeria Vilardo/IPS

PORT-AU-PRINCE, Jul 18 2013 (IPS) - More than two years ago, Haiti’s parliament approved a landmark amendment to the country’s 1987 constitution to ensure that women fill at least 30 percent of elected and appointed positions at the national level.

But despite some advancements – for example, out of 23 ministries in the current Martelly-Lamothe administration (2011-2016), 10 are headed by women – implementation of the law has stalled.

"Women in political and decision-makers' positions are sensitive to defending other women from all forms of violence, especially sexual violence." -- Wany Berrenite of OFAC

“With the support of women’s organisations, traditionally active since 1986, women in political positions have the potential to transform the entire society, which is mostly supported on their work,” Marina Gourgue, state secretary for professional education, told IPS.

“Women in political power and in decision-making positions have the highest capacities to influence the political, legislative and economic agenda… to advance their rights,” she said.

“[But] it is necessary to have an implementation law that indicates in detail how to go forward for the concrete realisation of Constitutional Article 17-1, or to include this disposition in the new electoral law,” Gourgue said.

Haitian women constitute slightly more than half of the population, and their contribution to the social, political and economic life of the impoverished country is also greater by virtue of their dual roles at home and in the workplace.

Overall, women’s representation in legislatures around the world is 20 percent, far from gender parity.

In 2010, according to the Inter-Parliamentary Union (IPU), Haiti ranked as one of the bottom countries in terms of women’s participation in politics and decision-making processes.

Things improved somewhat with the 2011 elections, which followed the devastating earthquake the previous year. Today, the lower house of the Haitian Parliament has five women deputies out of a total of 99 – Marie Jossie Etienne, Ogline Pierre, Guerda Benjamin Bellevue, Marie Denise Bernadeau and Ruffine Labbé.

In the Senate, they are practically invisible, with only one female senator, Edmonde Supplice Beauzile.

“It is necessary that the Haitian government takes action to implement the minimum quota of 30 percent and seeks to obtain full equality in terms of women’s participation, achieving 50 percent in all elected and appointed positions, in both the upper and lower houses,” Jean-Claude Muenda Kabisayi, UN Women’s representative in Haiti, told IPS.

Wany Berrenite is the director of OFAC (Organization Femme en Action, Women in Action Organisation), a grassroots non-governmental organisation that brings together women living in marginalised contexts in Petit Goâve, a coastal town 68 kilometres southwest of the capital Port-au-Prince.

“The adoption of the minimum quota can contribute to enable women to support gender-sensitive policies and to ensure that the needs and rights of Haitian women are attended to,” she told IPS.

OFAC provides training, tools and support to empower women at the social, political and economic levels to enhance their full participation in Haitian society.

Haitian law provides for equal working conditions regardless of gender, religious beliefs or marital status, but does not explicitly prohibit sexual harassment, which is rampant in the workplace.

“Sexual harassment is ordinary in Haiti,” Berrenite said. “Women in political and decision-makers’ positions are sensitive to defending other women from all forms of violence, especially sexual violence.

“Women’s organisations are calling on the Haitian government to seriously address violence against women and girls with appropriate laws that can punish these crimes that impoverish our threatened country,” she added.

Women’s participation in national life, especially in politics, is also essential to strengthen democracy and the rule of law.

One of the major obstacles for women is the structural discrimination associated with the patriarchal organisation of society and limited access to formal education.

“There are many cultural barriers and gender stereotypes that determine the common perception of politics as a male affair,” UN Women’s Kabisayi told IPS.

“It is in the political sphere that we have the instruments and budget for the development, through the formulation and implementation of laws. Women’s presence in politics is not just essential to advance women’s rights but the rights of the entire society,” he added.

These disparities are especially pronunced at the local level. In the last elections, only three percent of women were elected to the Administration Council and two percent to the judicial branch.

In March, the United Nations Security Council called on Haitian political leaders to break a 16-month impasse that has prevented the holding of long overdue elections, which were supposed to take place in January 2012.

The same month, Haiti’s National Palace noted that parliament had finally sent the names of three of its members to sit on a nine-member electoral council that will be tasked with holding elections for mayors and 10 of 30 senate seats.

However, ongoing political friction, disagreements and concerns about who will ultimately sit on the powerful council risk delaying the balloting further.

“Politics as a zero-sum game is not something that moves a country forward,” Nigel Fisher, the head of the U.N. Stabilization Mission in Haiti (MINUSTAH), said in a Mar. 21 statement calling on the government to immediately schedule new elections.

“Developing consensus around core elements of an inclusive, political process and democratic institutions is very important.”