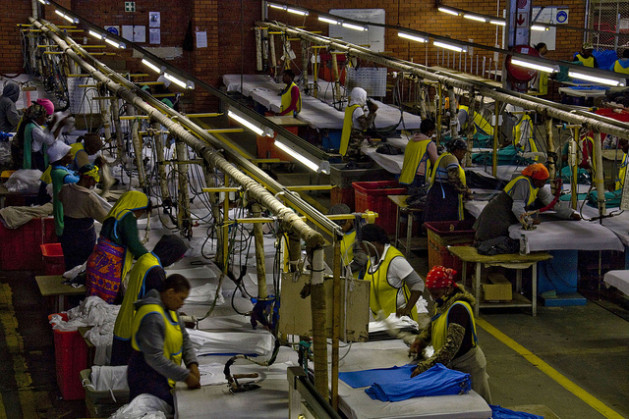 UNITED NATIONS, Jul 18 2013 (IPS) - Bridging the gap between Pan-Africanism and the African Renaissance has been a top priority for the African Union (AU).

But with a military coup in Egypt, instability in South Sudan and Mali, and even the ailing health of former South African President and freedom fighter Nelson Mandela, solidifying its purpose and mission as the continent’s mouthpiece has been a bumpy road for the organisation.

“Poverty is number one and should be number one when you want to put the African continent to another level." -- Robert Kayinamura of Rwanda's Mission to the U.N.

Founded in 1963 by African leaders including Julias Nyerere of Tanzania, Milton Obote of Uganda, Kenneth Kaunda of Zambia and Nkwame Nkuruma of Ghana, the Organisation of African Unity (OAU) was established to free countries from colonial rule.

The intention was to build a better, self-sustained league of democratic nations that would push the continent forward. But a recent panel discussion that took place at the U.N. seemed to have lost its original intent in a debate over whether the African continent should participate fully in the global economy as it is, or create its own financial systems and become an equal contender on a much larger scale.

“The problem with this conversation here is that it came from a perspective of Pan-Africanism, but old Pan-Africanism.  We need to get to the new Pan-Africanism,” Robert Kayinamura, a first counsellor for the Permanent Mission of Rwanda to the U.N., told IPS.

Pan-Africanism is an ideology and movement that espouses unity and solidarity not only on the continent but within the diaspora.

As Africa continues its growth spurt, the world – primarily China – is beginning to focus on its wealth of natural resources.  And Africa’s respective leaders are utilising organisations such as the Southern African Development Community (SADC) and AU to bind together and formulate concrete economic, diplomatic and development plans.

According to Dr. Ali Mazrui, a professor of African studies at Cornell University, conflict prevention has not been the organisation’s strong point.  In the last 50 years, many countries have endured horrific civil wars while their neighbours looked on cautiously.

“[Ugandan President Yoweri] Museveni should have more readily intervened in Rwanda in April of 1994 the way Julius Nyerere intervened in Uganda,” Mazrui said, referring to the Rwandan genocide and the Tanzanian-led ouster of dictator ldi Amin’s regime in 1978-79.

This path may have led to the increasing dependence on international interventions during times of war, and surrender to institutions such as the International Criminal Court (ICC) for justice thereafter.

Because development is directly related to conflict, which is then related to poverty, managing conflict and promoting peace would have been a sound way to sustain the continent during the first 50 years of the OAU.

On Sep. 9, 1999, the OAU came together to establish the African Union (AU) as a means to aid the continent in its growth to becoming an equal player in the global economy.

Not having the proper resources or economic expertise to tackle issues of development, the OAU focused heavily on the eradication of colonialism and then passed the baton to the AU to further develop the economic infrastructure of Africa.

Beginning its revisions and strategising policies to incorporate economic change, the AU set forth a plan for a central banking system that would uplift Africa from its deepening financial woes and most importantly, and while doing so, focus on the source of all its problems: poverty.

“Poverty is number one and should be number one when you want to put the African continent to another level, because poverty is the source of conflict,” Kayinamura told IPS.

With projects to start an African Central Bank, an African Investment Bank and an African Monetary Fund in 2010 – 2011, the AU decided that by encouraging Africans to be self sustaining – less dependent on aid or any other outside handout – stronger, more democratic nations would be formed.

The idea was simple: eradicate poverty by creating a financial institutions that gave out manageable loans, and that in turn built the private sector.

“The private sector has been the engine of fighting poverty because it creates jobs. You get a job, I get a job, everybody gets a job, and my kids go to school.  It doesn’t have to be the vicious cycle: I come from the garden, so my kids go to the garden,” Kayinamura told IPS.

It is a vicious cycle that many Africans hope not to perpetuate, as the pressure on their leaders to assert change grows heavier.  But lack of political maturity and capacity-building continue to the slow the process of achievement. As the world turns its eyes once again to North Africa, the role of the OAU and AU will be brought back into the limelight.

And the question remains: What – and who – will move Africa forward?