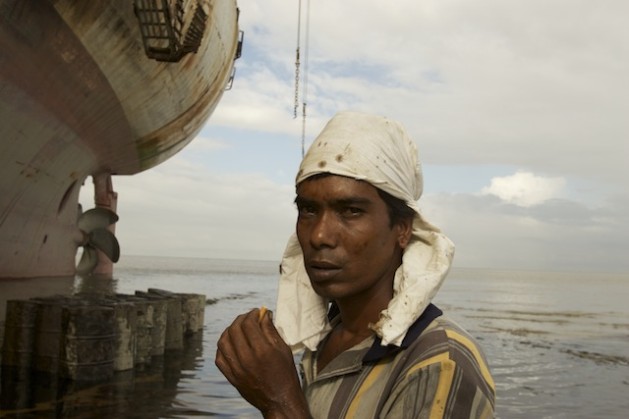 At a shipbreaking yard in Dhaka. Credit: Mahmud/Map.

BRUSSELS, Jul 17 2013 (IPS) - Hundreds of European vessels are scrapped under hazardous conditions in South Asia every year. European parliamentarians have approved a new regulation to tackle the problem – but critics say it will have very limited impact.

The European Parliament’s Environment Committee voted last in favour of a proposal aiming to put an end to European ships being recklessly scrapped in developing countries.

“With this, we will have a safer disposal of ships. About 90 percent of the European vessels are scrapped illegally and the Basel Convention has failed to do something about this,” said Swedish Green MEP Carl Schlyter, who negotiated the agreement with the Council and guided the legislation through the European Parliament.

"Last year one European ship was sent to a substandard beaching yard in South Asia every day."

European Union-registered ships will now have to be recycled at EU-approved facilities that meet specific safety and environmental requirements and are certified and regularly inspected. The European Commission would be obliged to act if NGOs report irregularities.

Both EU ships and non-EU ships would also have to carry an inventory of hazardous materials when calling at ports in the EU. The regulation is likely to enter into force in the beginning of 2014.

Patrizia Heidegger from Shipbreaking Platform, a global coalition of organisations working for safe and sustainable ship recycling, is not pleased with the outcome.

“European shipping companies will continue to profit by having their ships scrapped on the beaches of South Asia. It is positive that the beaching of vessels is technically prohibited, but generally the new regulation won’t change much,” she told IPS.

She says that the regulation will not have a large impact since ship owners can easily flag out and circumvent the regulation if they don’t want to comply. The coalition wants the regulation to apply to all ships calling at European ports, instead of only the EU-flagged vessels.

“Last year one European ship was sent to a substandard beaching yard in South Asia every day. It has to be proven that the system is able to trace hazardous waste and make sure it is disposed properly. We remain skeptical until we see that the monitoring actually works.”

Schlyter pushed for an EU fund to subsidise safe recycling of the ships. The fund would have been financed by fees on ships docked in EU ports, but the parliament rejected this part of the proposal.

“The fund was supported by all the political groups, but then the parliament voted it down after strong lobbying from ship owners and EU ports. The ports claimed that the arrangement would result in over 100 percent increase in fees, which is not true,” Schlyter told IPS.

Schlyter says that with a fund in place it would not pay to flag out. He says that the commission might propose creation of a fund later if the new regulation proves insufficient.

Of the top 10 European “global dumpers” in 2012, Greek ship owners were number one, dumping 167 ships on Asian beaches. German ship owners represented the second largest group of toxic ship dumpers with 48 ships, followed by ship owners from the UK with 30 ships, and Norway with 23 ships scrapped on beaches in South Asia.

According to the coalition most of the end-of-life ships sent by European ship owners did not fly an EU flag but flags from Panama, Liberia, the Bahamas or St Kitts-and-Nevis.

Bangladesh tops the list of countries having the greatest number of ships scrapped every year, with India and Pakistan trailing far behind. Unskilled and unprotected workers manually handle poisonous chemicals and are also exposed to the risk of explosion while dismantling old vessels.