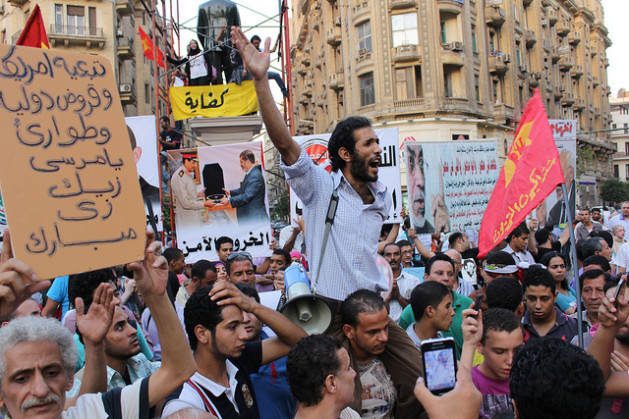 Protests have been building against Morsi in Cairo since last summer. Credit: Gigi Ibrahim/cc by 2.0

WASHINGTON, Jul 4 2013 (IPS) - Wednesday’s coup d’etat against the elected government of Egyptian President Mohamed Morsi has placed the administration of President Barack Obama in an uncomfortable position on a number of fronts.

Most immediately, it will be pressed to decide whether Morsi’s ouster constituted the kind of military coup that requires a suspension of some 1.6 billion dollars in U.S. military and economic assistance under U.S. law – a matter that is already being hotly debated both within and outside the administration now.

“I think it would be very naïve to assume that this announcement today would necessarily move Egypt back to a democratic trajectory." -- Stephen McInerney of the Project on Middle East Democracy

But U.S. officials are also very concerned about the possibility of a violent reaction to the coup by Morsi’s Muslim Brotherhood, which, despite its dramatic decline in public popularity during Morsi’s one-year rule, remains Egypt’s most well organised institution, besides the military. Independent analysts have even suggested that conflict of the kind that wracked Algeria during much of the 1990s cannot be ruled out.

On the home front, the administration is also concerned that it will add ammunition to hawkish Republicans who have argued that Obama’s handling of the “Arab Spring” has been an abject failure and that his alleged “coddling” of the Brotherhood and other Islamist parties that swept elections in the region has backfired to the detriment of U.S. security interests.

Even as the current crisis began to crest Monday when, in the wake of massive anti-government demonstrations Sunday, the military issued an ultimatum for Morsi to work out a power-sharing agreement with his political foes, Republicans were already on the attack.

“The Egyptian turmoil stems from the Morsi government’s predictable power grab, which the Obama administration has been far too accepting of,” House Foreign Affairs Committee chair Republican Ed Royce told the cable blog on foreignpolicy.com. “U.S. aid has failed to compel the Morsi government to undertake the political and economic reforms needed to avert this crisis.”

Hours after the military’s announcement that the Constitution had been suspended and Morsi replaced by an interim government to be headed by the head of the Constitutional Court, the White House issued a statement in Obama’s name stressing that Washington “does not support particular individuals or political parties, but we are committed to the democratic process and respect for the rule of law.”

“(W)e are deeply concerned by the decision of the Egyptian Armed Forces to remove President Morsy and suspend the Egyptian constitution,” the statement said. “I now call on the Egyptian military to move quickly and responsibly to return full authority back to a democratically elected civilian government as soon as possible through an inclusive and transparent process, and avoid any arbitrary arrests of President Morsy and his supporters.”

Under U.S. law, the president must suspend all military and most economic aid whenever a “duly elected head of government is deposed by military coup or decree.” In Egypt’s case, a not inconsiderable 1.3 billion dollars a year in military aid and another 300 million dollars in economic assistance could be at stake pending the installation of a new democratically elected government.

In his statement, Obama said he had directed the relevant U.S. agencies to review the legal implications on U.S. aid of Wednesday’s events.

But it may be difficult for the administration to avoid enforcing the ban. Indeed, the Honduran army followed precisely that scenario after ousting President Jose Manuel Zelaya in 2009, and, despite protests by Republicans and the Pentagon, the administration labelled it a coup and suspended aid.

Washington has much more at stake in Egypt, whose military leaders, with whom the U.S. wants to retain as much influence as possible, have already taken great pains to deny that their action amounted to a coup.

“I think it’s just better to say this was a government that lost its legitimacy in a failed (democratic) transition,” said Robert Springborg, an Egypt expert at the Naval Post-Graduate School.

But whether the military will do so remains a big question, particularly given its previous record, most recently during the failed 17-month rule of the Supreme Council of the Armed Forces (SCAF) that took power after the ouster of former President Hosni Mubarak.

The administration should “make it clear to (Egyptian Defence Minister Gen. Abdel Fattah al-) Sisi that Washington would not support the return of the military to politics under the guise of national security and stability. We’ve heard this song before,” said Emile Nakhleh, a former director of the Central Intelligence Agency’s (CIA) Political Islam Strategic Analysis programme.

“I think it would be very naïve to assume that this announcement today would necessarily move Egypt back to a democratic trajectory,” said Stephen McInerney, the head of the Project on Middle East Democracy (POMED), which had been strongly critical of the administration’s failure to press Morsi earlier to compromise with his secular opposition or publicly criticise unilateral actions by the ousted president that curbed civil liberties or polarised the country.

“I think there’s reason to really fear a serious escalation of violence in the short term,” McInerney told IPS. “And there are real questions about the rights of Islamists who feel their opportunity to participate in the political process has been undemocratically taken away from them, and the inclusion of the Brotherhood in any future government is an enormously important question.”

His concerns were echoed by the International Crisis Group, which said in a release Wednesday, “The forceful removal of the nation’s first democratically-elected civilian president risks sending a message to Islamists that they have no place in the political order; sowing fears among them that they will suffer yet another blood crackdown; and thus potentially prompting violent, event desperate resistance by Morsi’s followers.”

Obama made much the same point. “The United States continues to believe firmly that the best foundation for lasting stability in Egypt is a democratic political order with participation from all sides and all political parties – secular and religious, civilian and military.

“…The voices of all those who have protested peacefully must be heard – including those who welcomed today’s developments, and those who have supported President Morsy,” his statement said.

Springborg also expressed concern that the reaction of the Brotherhood, many of whose headquarters around the country have been burned down by anti-government protestors in recent days, could be critical.

“The thing that can run this off the rails would be if the Brothers go for the Samson-wrecking option, (although) I don’t think they have that power or the will to do it, because they have too much to lose organisationally and financially,” he said.

In his view, the new leaders must deal with the economic crisis most urgently by appointing civilian technocrats to finalise a long-pending 4.6 billion dollar loan from the International Monetary Fund (IMF). That, in turn, would spur Saudi Arabia to provide major financial support that it has withheld in part because of its traditional distrust of the Brotherhood.

“When the Saudis come forward, then everyone else will, too,” he said, offering some real momentum to an economy that has spiralled downward under both the SCAF and Morsi.

*The story moved on Jul. 4, 2013 incorrectly quoted Nathan Brown of the Carnegie Endowment for International Peace as saying: “(I)f it is clear that what the military has just done in Egypt has ended the career of an anti-democratic leader and the military is materially supporting democratising moves – including, importantly, the stepping aside of the military and genuine transfer of power to a legitimately elected civilian leadership by a certain date – then the United States should support those moves in the most concrete way possible by not interrupting aid.”

Those words were written by David Rothkopf in an article that appeared on the foreignpolicy.com website on Jul. 3, 2013, and were mistakenly attributed to Dr. Brown. IPS apologises for the mistake.