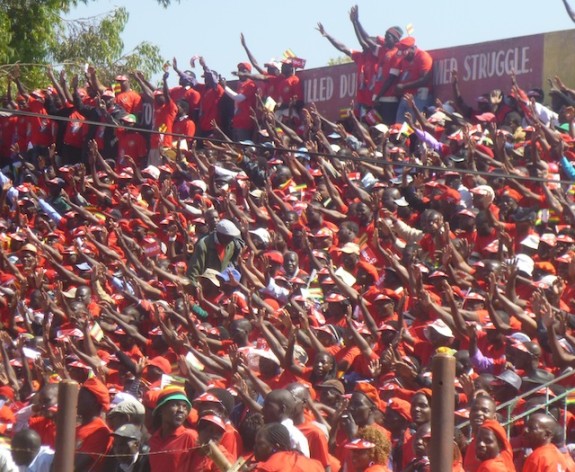 Prime Minister Morgan Tsvangirai told an estimated crowd of 40,000 supporters at a rally in Harare’s Freedom Square on Jul. 29 that his party had not being able to verify the names on the voters’ roll. Credit: Jeffrey Moyo/IPS

HARARE, Jul 31 2013 (IPS) - “We definitely can’t miss this grand chance to cast our vote. It’s like Zimbabwe is just gaining independence; the excitement to see a new government coming into power is just incredible and we hope we get a new Zimbabwe rolling again,” 38-year-old Mildred Saungweme from Harare’s Hatfield suburb, told IPS.

On Wednesday, Jul. 31, the country is set to choose a president. It will be the third time that Prime Minister Morgan Tsvangirai, leader of the Movement for Democratic Change-Tsvangirai (MDC-T), has challenged President Robert Mugabe for power. Mugabe, leader of the Zimbabwe Africa National Union-Patriotic Front (Zanu–PF), has been in office for 33 years.

However, ahead of Wednesday’s vote, election observers from the African Union (AU) and the Southern African Development Community (SADC) had doubts whether the poll would be credible.

“I’m worried [that the] voters’ current excitement may be hampered by certain forces determined to steal this election,” an AU observer speaking on condition of anonymity, told IPS.

“The risk of escalating violence and other human rights abuses after the election results are announced remains high because the infrastructure of violence remains intact." -- Human Rights Watch director for Southern Africa, Tiseke Kasambala

Hours before polling stations across this southern African nation opened at 5am, voters were still struggling to find out where they could verify their names on the electoral roll.

Those who knew where they would vote, like 73-year-old Tambudzai Gavi from Harare’s Mabvuku suburb, said they were willing to wait overnight in queues in order to cast their ballots.

“We have had one party, Zanu–PF, which has failed to deliver its promises for 33 years. I will sleep in the queue to make sure nobody will have an excuse to deny me the chance to cast my vote,” Gavi told IPS. Results are expected no later than Aug. 5.

The Zimbabwe Electoral Commission (ZEC) has been criticised by political parties and civil society organisations for failing to make the electoral roll available before the polls. There are an estimated 6.4 million registered voters, but concerns have been raised about the number of dead still on the roll.

According to the Electoral Act, the ZEC is required to provide all contesting political parties and observers who request it either a printed or electronic copy of the electoral roll.

“We wonder how names on the voters’ roll are going to be verified if the electronic voters roll has still not been made public,” Tawanda Chimhini, director of Elections Resource Centre, an independent elections organisation in Zimbabwe, told IPS.

Tsvangirai told an estimated crowd of 40,000 supporters at a rally in Harare’s Freedom Square on Jul. 29 that his party had not being able to verify the names on the voters’ roll. “About a day before the elections, ZEC has not presented us with the electronic voters’ roll, something which renders questionable its credibility to run this election,” Tsvangirai said.

International rights group Human Rights Watch’s (HRW) Africa director, Daniel Bekele, told IPS that as legal and institutional reforms, including those to reform the security sector and the ZEC, had not been implemented, it did not create a space for free and fair elections.

“In spite of the difficult human rights environment, the elections are going ahead as a critical test both for Zimbabwe and the regional observers, SADC and AU in particular, to demonstrate genuine commitment to reflect the will of Zimbabwean people,” Bekele said.

“If the elections are rigged, Zimbabwe risks plunging into a complicated political crisis and the risk of violence and other human rights abuses is high,” added Bekele.

Already, ahead of the election there have been reports of violence, abductions and intimidation. IPS reported claims that local traditional leaders were cautioning villagers against voting for the MDC-T to avoid post-election violence by Zanu-PF. There were also reports of suspected Zanu-PF officials seizing voters’ identity cards.

On Jul. 30 reports by local media stated that riot police had been deployed to potential trouble areas in central Zimbabwe.

HRW’s director for Southern Africa, Tiseke Kasambala, told IPS that it would be difficult for voters to cast their ballots freely in light of these abuses.

“Zimbabwe’s unity government, consisting of the former ruling Zanu-PF and the two MDC factions, has failed to implement legal and institutional reforms to address various political, institutional and human rights issues ahead of elections,” Kasambala said.

She said that although the new Zimbabwean constitution, which was signed into law in May, had implemented some reforms; these were insufficient to level the political playing field as there has been no repeal or amendment of repressive legislation.

The country still needs to amend repressive laws like the Access to Information and Protection of Privacy Act, which stipulates that journalists should register annually with the Zimbabwe Media and Information Commission, and the Public Order and Security Act, which criminalises the reporting of falsehoods and leaves journalists open to litigation.

“The risk of escalating violence and other human rights abuses after the election results are announced remains high because the infrastructure of violence remains intact, and there has been no accountability for previous human rights abuses, including the 2008 political violence,” added Kasambala.

In 2008, following the disputed election that saw Mugabe hold on to power, violence erupted across the country. In a 2011 report titled Perpetual Fear: Impunity and Cycles of Violence in Zimbabwe, HRW stated that Zanu-PF had been responsible for abuses that led to the deaths of 200 people, and the beating and torture of 5,000 more.

Despite this, MDC-T supporters were excited ahead of the vote.

“We know Tsvangirai is going to win this election and form a new democratic government to relegate President Robert Mugabe to the dustbin of history,” 31-year-old Patricia Hove, a staunch MDC-T supporter, told IPS.

However, most Zanu-PF hardliners claim that a MDC-T victory means the country runs the risk of falling into an era of neo-colonialism.

“If MDC-T wins this election, we run the risk of falling into the hands of an indirect leadership of Britain again because this party is a puppet of Britain and America, countries which feed it money to garner support from ordinary Zimbabweans,” Goodson Nguni, a well know Zanu-PF leader, told IPS.

Meanwhile, 36-year-old unemployed civil engineer Nigel Samuriwo was looking forward to casting his vote. Samuriwo graduated 13 years ago, but he has not been able to find a job since.

“I’m so excited about this election. I’m so optimistic it will bring change in my life and a job I have never had under Mugabe’s government, which sparked the closure of several companies,” Samuriwo told IPS.