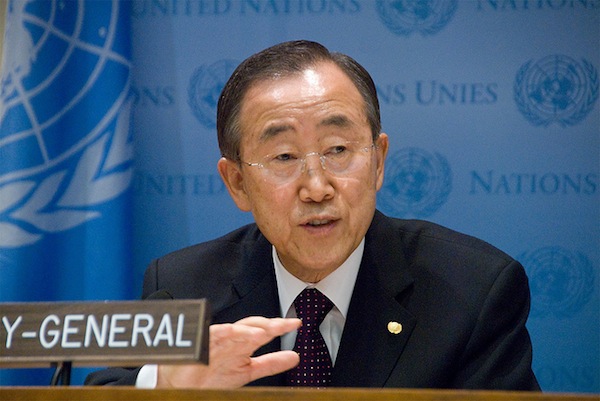 U.N. Secretary-General Ban Ki-moon has repeatedly said that the Syrian crisis can be solved only politically. Credit: IPS

UNITED NATIONS, Aug 30 2013 (IPS) - If and when the United States launches a military attack on Syria, one of the biggest political losers would be the United Nations.

The administration of President Barack Obama will not only bypass the Security Council, the only body mandated to declare war and peace, but also rebuff Secretary-General Ban Ki-moon, who has repeatedly said the Syrian crisis can be resolved only politically, not militarily, even as he continues to underscore the importance of the U.N. charter.

U.S. Secretary of State John Kerry told reporters Friday, “We believe in the United Nations,” but still complained the U.N. investigative team in Syria is not mandated to confirm who used the chemical weapons, only whether or not they were used.

U.N. spokesperson Martin Nesiry told reporters Friday the focus is on completing the analysis of the incident of Aug. 21.

“Everybody concerned, including the Syrian authorities, agreed that this should be a priority, that there should be the focus on this, but I have just made clear that the team will be returning to continue its work on those other incidents to be able to complete a final report.”

"If [the ICC] decided that crimes against humanity had been committed, the entire political landscape would change."
-- Jonathan Granoff
But there would be no time line on either of the two reports by the U.N. team.

The military attack on Syria will also prove once again the ineffectiveness and irrelevance of the 15-member Security Council, which has remained deadlocked because of threatened vetoes by Russia and China, who have refused to endorse the impending U.S. invasion.

But the council, the most powerful organ in the world body, could have still played a relatively significant role by urging the International Criminal Court (ICC) to move against Syrian President Bashar al-Assad, says Jonathan Granoff, president of the Global Security Institute.

“There would be a different political dynamic if the ICC were to determine that sufficient evidence for a prosecution exists,” he added.

“If it decided that crimes against humanity had been committed, the entire political landscape would change,” said Granoff, who is also an adjunct professor in international law at the Widener University School of Law.

Such a crime can be prosecuted by the ICC, said Granoff.

Syria is not a member of the ICC nor is it a party to the Chemical Weapons Convention (CWC), but for the ICC to formally investigate allegations of criminal conduct, such as mass indiscriminate killings or the use of chemical weapons, the Security Council could “refer” Syria, or the rebels, or both, to the Court.

References by the Security Council to the court have been made in the recent past – including Darfur, Sudan in 2005, and Libya in 2011.

Frank Jannuzi, deputy executive director of Amnesty International USA, believes the best course of action would be for the United Nations to complete its investigation into this latest outrage and for the Security Council to refer all evidence of war crimes and crimes against humanity from this and other incidents to the ICC.

“Those responsible must be brought to justice. The walls of impunity must come down,” he said.

It is also not too late for the Security Council to consider other measures, including targeted economic sanctions and the deployment of international human rights monitors, to reduce the ripping apart of families and the bloodshed of this protracted conflict.

Targeted sanctions (namely a freeze on the assets of President Bashar al-Assad and others who may be involved in ordering or perpetrating crimes under international law), a referral of the situation in Syria to the ICC and the deployment of international human rights monitors would help contribute to conditions for fruitful negotiations aimed at a solution that respects the human rights of all Syrians, he declared.

Without Security Council authorisation, coercive military intervention in Syria would not be legal, Granoff told IPS.

Since the fighting in Syria is not threatening another country, the circumstance of self-defence, which would allow the immediate use of force against Syria by the threatened country without approval of the Security Council, is not applicable.

The actions of the Assad regime are horrible, but international law should not be set aside with impunity, he said, pointing out that alternative routes exist.

Mass atrocities are not new for the Assad regime. The U.N. Human Rights Commissioner, Navi Pillay, as early as December 2011, called for the ICC to investigate mass killings. She was correct then, he noted.

It is worth noting, said Granoff, that she has recently called for ICC investigations of rebel slaughters as well. There is firm legal foundation for ICC involvement.

Although Syria is not a party to the 1993 Chemical Weapons Convention, prohibiting the use of chemical weapons, that does not matter, said Granoff.

Customary international law prohibits the use of such weapons of indiscriminate effect generally, and Syria would be responsible, especially if they were used against civilian populations regardless of whether they are party to the Treaty, he added.

The legal hurdles to such a reasonable course of action are not as high as the political ones.

However, advancing world security through the rule of law will provide much greater benefit than such short-term political posturing that does little to stop the brutality the people of Syria are experiencing, Granoff said.

One problem of a referral to the court is that if it commences prosecuting, it might make the horse-trading negotiations between the various rebel groups and the Assad regime difficult. If either faces prosecution in the event of losing militarily it could diminish incentives to achieve peace, he added.

“The status quo is worse than this risk. It is certainly preferable to risking very dangerous unintended consequences of an illegal military strike now,” Granoff declared.