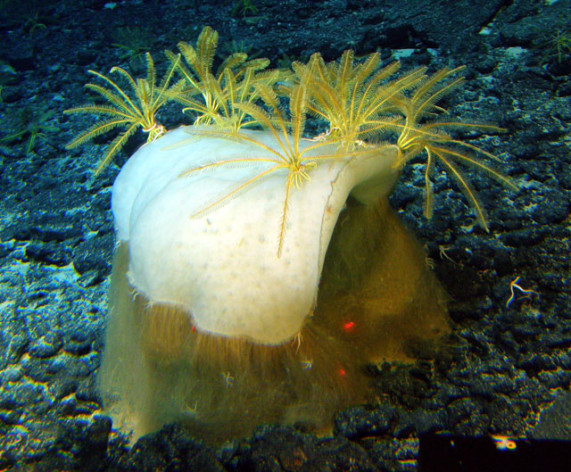 Because many deep-sea ecosystems are so stable, even small changes in temperature, oxygen, and pH may lower the resilience of deep-sea communities. Credit: Courtesy NOAA HURL Archives

UXBRIDGE, Canada, Oct 15 2013 (IPS) - Oil, gas and coal are contaminating the world’s oceans from top to bottom, threatening the lives of more than 800 million people, a new study warns Tuesday.

“It took a year to analyse and synthesise all of the studies on the impacts of climate change on ocean species,” Camilo Mora, an ecologist at University of Hawai‘i in Honolulu and lead author, told IPS.

"We are seeing greater changes, happening faster, and the effects are more imminent than previously anticipated." -- Alex Rogers of the University of Oxford

“It was very sad to see all the responses were negative. We were hoping there might be some safe havens,” he said.

The study found that carbon emissions from burning fossil fuels are overheating the oceans, turning them acidic and reducing the amount of oxygen in seawater. This is happening too fast for most marine species to adapt and ocean ecosystems around the world will collapse.

By 2100, no corner of the oceans that cover 70 percent of the Earth’s surface will be untouched.

“The impacts of climate change will be felt from the ocean surface to the seafloor. It is truly scary to consider how vast these impacts will be,” said Andrew Sweetman of the International Research Institute of Stavanger, Norway, co-author of the PLOS Biology study published Oct. 15.

This ambitious study examined all the available research on how current and future carbon emissions are fundamentally altering the oceans. It then looked at how this will impact fish, corals, marine animals, plants and other organisms. Finally the 29 authors from 10 countries analysed how this will affect the 1.4 to 2.0 billion people who live near the oceans or depend on them for their food and income.

Some 500 million to 870 million of the world’s poorest people are likely to be unable to feed themselves or earn incomes from oceans too contaminated by fossil fuel emissions, the “Biotic and Human Vulnerability to Projected Changes in Ocean Biogeochemistry over the 21st Century” study concludes.

“We are making a big mess of the oceans. Climate change is having a major impact illustrating the need for urgent action to reduce emissions,” said Mora.

The researchers used models of projected climate change developed for the Fifth Assessment Report of the Intergovernmental Panel on Climate Change (IPCC) to build their analysis. These models are validated using measurements from past decades.

Additionally the findings of the PLOS Biology study were verified using actual observations. There were some differences but not significant enough to alter the conclusions, said Mora.

More shocking is that the oceans will be dramatically altered even with reduced growth in use of fossil fuel in coming decades and major declines starting in 2050, he said.

Only an abrupt decline in consumption of oil, gas, and coal within the next 10 years will minimise the impacts on the oceans.

This study only looked at how climate change is impacting the oceans and did not look at other impacts such as overfishing, chemical and nutrient pollution or plastic trash.

However, the 2013 update to the Ocean Health Index also released Tuesday did look at all current impacts on oceans. It ranked the current overall health of the oceans as a 65 out of possible 100. The index was launched in 2012 and is annual international collaboration to assess health of oceans based on 10 measures such as biodiversity, coastal livelihoods and protection, food provision.

The oceans’ ability to provide food only scored 33 out of 100, showing that food security is already at risk. It also means fish and other foods from the oceans are being harvested far faster than nature can replace them, the index reports.

China, Taiwan, Russia, India and Japan had the worst scores indicating that their regional wild-caught fisheries are nearly depleted.

“The Ocean Health Index measures how well we are sustainably producing seafood,” said Andrew Rosenberg, director of the Centre for Science and Democracy at the Union of Concerned Scientists.

Fish are a vital source of protein for many but the index shows food security is at risk in some parts of the world, said Rosenberg in a release.

In regions subject to damaging storms and cyclones, the health of their coastal zones including mangroves, salt marshes, seagrass beds and coral reefs are a poor 57 out of 100, the index found. Tropical cyclones cause an estimated 26 billion dollars a year in lost property.

“Coastal habitats mitigate the damage that storms cause…. We must try to restore naturally protective coastal habitats,” Elizabeth Selig, director of Marine Science at Conservation International, said in a statement.

The Index “reveals the areas that must be improved in order to provide our children and their children a healthy thriving ocean,” said well-known oceanographer Sylvia Earle who is explorer-in-residence at National Geographic.

“This must be done as if it’s a matter of life and death – because it is,” Earle said in a statement.

Yet another independent assessment of ocean health reached a similar conclusion.

Climate change combined with other impacts like chemical pollution and overfishing have put the oceans into a downward spiral.

“We are seeing greater change, happening faster, and the effects are more imminent than previously anticipated,” Alex Rogers of the University of Oxford and IPSO’s scientific director told IPS.

“What these latest reports make absolutely clear is that deferring action will increase costs in the future and lead to even greater, perhaps irreversible, losses,” said Dan Laffoley of the IUCN in a release.