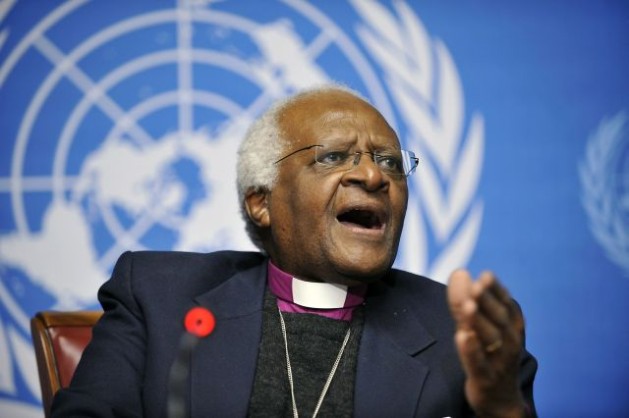 Desmond Tutu, the Archbishop emeritus of Capetown and one of the world's most renowned human rights activists. UN Photo/Jean-Marc Ferré

Sudan and Kenya, whose political leaders are accused of war crimes and genocide, are leading the movement against the ICC and have already threatened to pull out of the tribunal.

"The Archbishop's campaign is a stark warning against Africa choosing impunity over justice." -- Alice Jay of Avaaz

Tutu, the Archbishop emeritus of Capetown and one of the world’s most renowned human rights activists, has appealed to leaders of South Africa and Nigeria, two of the most powerful countries in Africa, “to stop Sudan and Kenya from trying to drag Africa out of the ICC”.

The campaign has been launched in collaboration with Avaaz, a global civic organisation, described as one of largest online activist networks.

The 54-member African Union, which has demanded the ICC drop the case against Kenya’s leadership, will be meeting in Addis Ababa over the weekend to discuss, among other things, the role of Africa in the ICC.

Several African countries, including Uganda, Rwanda and Ethiopia, have criticised and opposed the upcoming trials of Kenyan President Uhuru Kenyatta and his deputy William Ruto, on charges of crimes against humanity in the 2007-2008 post-election violence that reportedly left over a thousand people dead.

In an email to over 26 million members of Avaaz, and responding to charges the ICC is a Western witch-hunt because most of its investigations have taken place in Africa, Tutu said, “I do not buy the spin the ICC has an anti-African bias. No.”

African leaders who abuse power, he argued, must be held to account for their victims.

“And I am on record saying there are certain former Western leaders, among others, who should join them,” he added.

The largest group of ICC members (31 out of 122) are from Africa and the majority of cases being investigated are in Africa, including Sudan, Uganda, Libya, Kenya, Cote d’Ivoire, the Central African Republic and the Democratic Republic of Congo (DRC).

Elise Keppler, associate director of the International Justice Programme at Human Rights Watch (HRW), told IPS Tutu is sending a key message on the importance of African governments supporting the ICC as a crucial court of last resort.

This is a message activists across Africa have been sending to their governments this week – as represented by a letter to foreign ministers signed by more than 150 groups from more than 35 African countries sent in advance of the African Union summit, she said.

William R. Pace, convenor of the Coalition for the International Criminal Court (CICC), told IPS Tutu and Avaaz are raising awareness that some African leaders are “promoting a great injustice in the name of justice.”

“These is little danger that these anti-ICC leaders can kill the ICC, but they could do serious damage to the Court, but mostly to their own reputations, to the truth that the ICC is a major achievement of Africa, and most sadly they can do damage to the hopes and lives of the millions of African victims of crimes against humanity,” he added.

The outpouring of support for international justice and the ICC by civil society and by African leaders like Tutu and former U.N. secretary-general Kofi Annan “is a greater story than tired, old tale of heads of government supporting impunity over accountability”, said Pace, a steering committee member of the International Coalition for the Responsibility to Protect (ICRtoP).

Alice Jay, campaign director of Avaaz, said, “The Archbishop’s campaign is a stark warning against Africa choosing impunity over justice.”

She said that in Congo, Liberia and Cote d’Ivoire, the ICC has brought hope to thousands persecuted by armies, militias and madmen.

“Hundreds of thousands of people are now calling on South Africa and Nigeria to lead the continent to save the ICC,” she added.

Far from being anti-African, Tutu said, the ICC’s chief prosecutor, vice-president and five of its judges are Africans and its interventions have saved countless lives in Africa.

“Those who fear being prosecuted by the ICC should not be allowed to lead Africa by the nose,” he added.

Asked about charges of anti-African bias, HRW’s Keppler told IPS that claims the ICC is targeting Africa are simply not based in fact. She said the majority of the court’s investigations came about because African governments asked the ICC to get involved. Two more came from Security Council referrals, she said.

The ICC’s office of the prosecutor acted on its own initiative in only one case – Kenya – and only after Kenya failed to pursue justice domestically.

That’s not to say there are no problems with the reach of justice, she said, pointing out that currently “some powerful governments are able to ensure that they can evade accountability before international courts by not joining the ICC or using their veto power at the Security Council to only refer certain situations to the ICC”.

The lack of referral of Syria to the ICC is case in point. Both Russia and China, two permanent members of the Security Council, have threatened to use their vetoes against any attempts to involve the ICC in Syria.

“But that should be impetus to governments African and non-African to call out double standards in the application of justice and press for justice to be possible wherever the most serious crimes are committed, not cripple the only permanent court with authority to try grave crimes,” said Keppler.