The ageold occupation of picking through trash for reusable materials is taking on a new dimension in Cuba for self-employed workers and members of cooperatives. 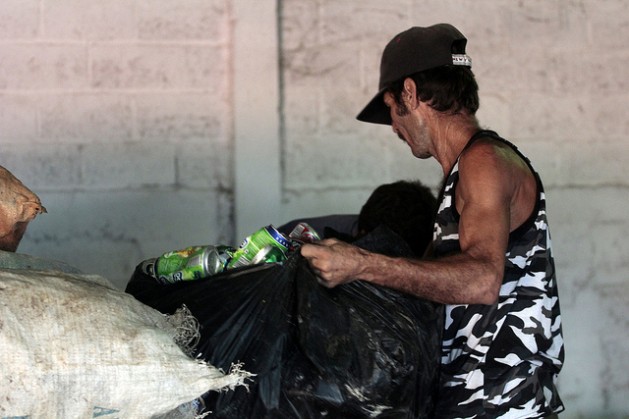 HAVANA, Oct 23 2013 (IPS) - As self-employment and cooperatives expand in socialist Cuba, they are making incursions into new areas, such as waste picking and recycling – for many a means of subsistence, but for others, a gold mine.

“Pitusa” said the trash thrown out by the people of Havana is an inexhaustible source of useful materials. “I don’t waste anything – I collect, select, clean and keep for myself when I need it,” said this middle-aged Cuban who uses discarded components to fix windows or make “multi-functional” furniture.

“I’m 43 years old and I’ve been working in recycling for 19 years,” he told Tierramérica*, after asking to be identified merely as Pitusa, because he does not have a permit to be a self-employed worker or “cuentapropista”.

“I do so many different things that I wouldn’t know how to register and pay taxes,” he said, to justify his lack of a permit.

He said the garbage yielded everything from broken furniture to bottles, glass, plastic tubes, steel pipes, fishing reels, or old sofas, doors and windows. “Nothing is completely useless, although to make a new piece of furniture from a piece of junk isn’t easy. For me it’s an artistic thing to give a use to something that was abandoned and no one wants anymore,” he said, with a touch of pride.

Pitusa is a “buzo”, as waste pickers who salvage reusable or recyclable materials are known in Cuba.

“At this time there are 5,800 recoverers with cuentapropista permits, but we know that there are many more who aren’t registered,” said Marilyn Ramos, assistant director general of the Unión de Empresas de Recuperación de Materias Primas (UERMP) – the state association of companies that salvage raw materials, which recycles scavenged trash.

Odilia Ferro has dedicated herself to collecting and selling recyclable waste – “legally” she stresses – for the past 20 years in San José de las Lajas, the municipal seat in Mayabeque, a province that borders Havana.

“Sometimes I go out on the streets and look for stuff myself. But because people know that I work in this, they come to my house to sell things to me,” she told Tierramérica.

She buys aluminium, bronze, steel, plastic and empty rum or beer bottles. Until July she sold them to the state-run salvage company of Mayabeque, which has since then become a cooperative of nine members, four of whom are women.

“The good thing is that now they always have money to buy what you bring them, and in cash,” Ferro said.

In Cuba’s centralised economy, for many years cooperatives were only allowed in agriculture. But in mid-2013, the government of Raúl Castro made it possible to establish cooperatives in other areas, as part of wider reforms to boost “prosperous, sustainable socialism.”

Of the first 124 cooperatives established outside of agriculture, two are involved in salvaging waste materials.

The government’s aim is for each of the country’s 168 municipalities to have a waste recovery cooperative.

Ramos said the UERMP association is not equipped to go door to door collecting recyclable waste materials. That task is left to the growing private sector, while the state reserves for itself the large sources of recoverable waste products, she explained in an interview with Tierramérica.

Ignoring the stigma traditionally faced by waste pickers, Eida Pérez, a 39-year-old accountant, has found the recovery of waste materials to be surprisingly lucrative. In just two months, the cooperative she heads earned a profit of 14,750 dollars. (The average salary in Cuba is 19 dollars a month.)

“Three years ago, we couldn’t imagine this could happen” she said. Pérez said her cooperative is moving towards labour autonomy, overcoming fears and obstacles from a recent past when people only did what was indicated “from above.”

“We have increased the products we recover…Now we see ourselves as more efficient, and at an advantage compared to the state companies, because I don’t face restrictions. We operate in cash, we can pay more if the product merits it, lease our trucks and hire the services of cuentapropistas,” she said.

“We earn a 50 percent profit on all of the products we buy,” Pérez added. Her fellow cooperative members, who elected her as president, hope to reach the end of the year with a strong profit margin. But in the last two months they have already managed to pay off the initial interest-free loan of 5,400 dollars.

At the start, most of the new cooperatives were created on the initiative of the state, which later handed operations over to employees.

“It’s a bad way to start, because one basic principle of these forms of business management is individual enterprise,” an economist who preferred to remain anonymous told Tierramérica.

But in Ramos’s view, “the benefit is double. We increased the recovery of recyclable waste materials and kept them from going into the dump – in other words, there’s also an environmental impact.

There are 986 garbage dumps in Cuba, which received just over 5.3 million tonnes of trash in 2012, according to the government statistics office.

In the past year, around 420,000 tonnes of waste were recovered, including steel, cast iron, lead, bronze, aluminium, paper, cardboard, plastic, textiles, electronic scrap and glass bottles.

These products were exported or sold to national industries, like the metallurgical industry, wire and cable production factories or paper and cardboard companies.

If local industry had had to import these materials, it would have cost the country 120 million dollars, Ramos said. “We want to increasingly industrialise this work and increase the value added of recycled products.”

The UERMP recycling association wants to foment the creation of provincial cooperatives that would carry out “at least basic” processing of waste products, Ramos said. Today there are only two garbage separating plants.

The ideal thing, she admitted, would be to get households to classify their own garbage. But that achievement, which would require heavy investment, is still a far-off dream for Cuba.