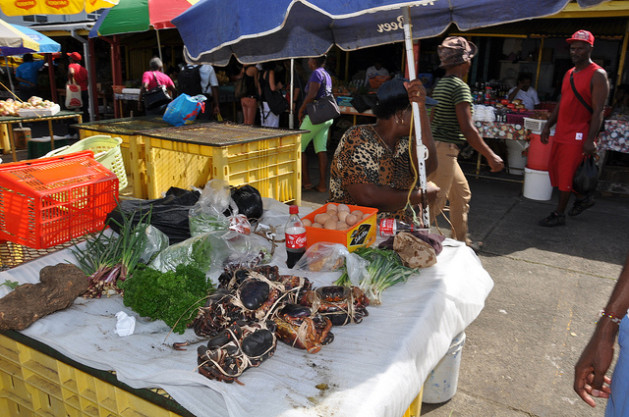 A vendor selling produce at a market in Dominica, which has been alternately hit by flooding and severe drought. Credit: Desmond Brown/IPS

CASTRIES, St. Lucia, Oct 7 2013 (IPS) - Malcolm Wallace always knew on which side his bread would be buttered.

At the age of 19, he built and operated his own greenhouse on his father’s farm in Dominica, planting lettuce, sweet peppers, tomatoes and cucumbers.

"Every step that we make forward we are probably making two backward." -- Samuel Carrette

“It was very lucrative and I actually made money,” said Wallace, now a graduate researcher at the Trinidad-based Caribbean Agricultural Research and Development Institute (CARDI).

“The push was financial. You do stuff and you see it’s actually making money, you are actually able to take care of your family and lime [party] a little bit. Which young person does not want that?” he told IPS.

Caribbean governments have long sought to attract more young people to their agriculture sectors, and the nine-member Organisation of Eastern Caribbean States (OECS) has declared agriculture and tourism the “key pillars for development in the region”.

Samuel Carrette, permanent secretary for ministry of environment, physical planning, natural resources and fisheries for Dominica, says the OECS is focusing on these two sectors in order to build a sound economic base, improve the quality of life of residents, provide employment and to reduce poverty.

But he laments that both sectors are seriously challenged by climate variability and climate change.

“For agriculture we have many situations of greenhouses being affected, being blown away by hurricanes or strong winds. We have flooding of fields, we have the issue of access roads being blocked or carried away,” he told IPS.

“The weather variability provides a very serious challenge for us in terms of scheduling activities,” he said, referring to the challenges for the tourism industry.

In 2011, Dominica experienced its worst flooding on record. That followed almost a year of drought from 2009-2010 that severely affected the agriculture sector. In 2008, the island’s fishing industry was destroyed by hurricane Omar.

“Government had to find monies to rebuild the fisheries industry by providing the fisher folk with all the required fishing gear to rebuild,” Carrette said.

The OECS is a nine-member grouping comprising Antigua and Barbuda, Dominica, Grenada, Montserrat, St. Kitts and Nevis, St. Lucia and St. Vincent and the Grenadines. Anguilla and the British Virgin Islands are associate members.

Ignatius Jean, the Inter-American Institute for Cooperation on Agriculture (IICA) representative in Jamaica and a former minister of agriculture for St. Lucia, told IPS that “food security is national security.”

Jean said that part of the IICA’s mandate is to support the member states in the management of natural resources, and coping with climate change in particular. They also work to show the linkages between the agriculture and tourism sectors.

He pointed to “the need for a multi-disciplinary approach towards managing the situation”, noting that this entails assessing the impacts of climate change and creating mitigation and adaptation strategies.

“We cannot run away from our territory. We have to learn to live with it. That is what adaptation is,” he said.

IICA has ongoing programmes to climate-proof the agricultural development strategies in Jamaica, St. Vincent and the Grenadines, Dominica and the Dominican Republic.

He told IPS that increased storm surges brought on by climate change is impacting the dive sector, in particular coral reefs.

“Ultimately, if corals are going to suffer, then the loss of the biodiversity will represent a loss of a competitive advantage in tourism,” he said.

The increase in the severity of storms and hurricanes will also drive visitors away, Nicholls said. He argued that visitors will not come to a region deemed unsafe, especially given the vulnerability of beach resorts to storm surges.

“Tourists come here for sun and sea. Properties are losing their appeal because of beach erosion,” Nicholls said.

“Extreme drought conditions mean we have no water and the tourism industry is highly based on water resources. If tourists cannot get water in your country, they will go elsewhere to get water,” he said.

However, it is not just the absence of water that concerns Nicholls but the abundance of it.

“If it rains in the dry season and it rains all the time we are not going to want to come to such a place,” he said.

Carrette said his country, Dominica, has “been exposed to very erratic weather conditions and for us it is a bit too frequent. This is so because Dominica is exactly directly in the path of the hurricanes given its location so that predisposes us to the unfavourable conditions of the tropical winds systems.”

He noted that most of the countries in the Windward Islands are moving away from a reliance on the banana industry and trying to diversify their economies, so severe weather conditions are major setbacks.

“As small developing island states, basically every step that we make forward we are probably making two backward because we have to keep rebuilding major roads, seawalls and rehabilitating feeder roads in the context of agriculture and rescheduling of tourism activities,” he told IPS.

“We have to understand that the monies required for rehabilitation and restoration of human livelihoods are not available locally within your own budget and you do not have adequate reserves to mobilise resources to do restoration work and so you have to borrow. So for us it’s a major challenge as it increases our debt burden.”

Senior director of economic affairs at the OECS Secretariat, Randolph Cato, said recently that the total cost of climate change to the OECS tourism industry could be as high as 12 billion dollars over the next 40 years.

“We must do something about it,” he said. “Adapting to climate change will cost less than the potential damage.”