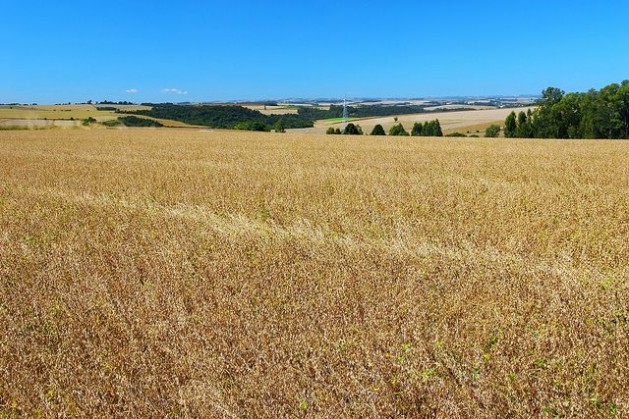 Field of soy in Não-Me-Toque, in the state of Rio Grande do Sul. Credit: Nilson Konrad/IPS

RIO DE JANEIRO, Sep 17 2013 (IPS) - Crop yields in Brazil, an agricultural powerhouse, are set to decline as a result of climate change, according to the most complete diagnosis yet of climate trends in this country.

Brazil is about to overtake the United States as the world’s top producer of soy, which could see yields fall 25 percent by 2050. Drops in productivity are also projected for beans, rice, maize, sugar cane, coffee and oranges.

Some of these products already saw declines in this year’s harvests.

The first exhaustive report on climate change in South America’s giant predicts that temperatures could be three to six degrees C higher by 2100, and says agricultural losses will be one of the most notable effects.

The report’s chapter on agriculture estimates that the sector will suffer some 3.1 billion dollars a year in losses after 2020.

“If temperatures continue to go up and down, like what is happening, we will have strong waves of heat and cold and losses in agricultural productivity,” Eduardo Assad, a researcher with Embrapa, the Brazilian Agricultural Research Corporation, and one of the authors of the report, told IPS.

Some of the food products mentioned in the report are staples of the Brazilian diet.

That means “we are without a doubt talking about food security,” Carlos Rittl, the head of the climate change and energy programme of WWF-Brazil, told IPS.

The report is the first of a series of three to be published by the Brazilian Panel on Climate Change, which was created in 2009 by the Ministry of Science and Technology and the Ministry of the Environment.

This first volume, which focuses on the scientific aspects of global warming, is a compilation of studies by 345 researchers.

It was presented at the first national conference on climate change, held Sept. 9 to 13 in the southern city of São Paulo. The next two volumes will come out in October and November.

The data from the first volume will be included in the fifth assessment report of the Intergovernmental Panel on Climate Change, part of which will be published on Sept. 27.

The heat, aggravated by a shortage of rainfall, could reduce the water levels in the country’s rivers and lead to a decline in groundwater supplies if emissions of greenhouse gases are not reduced, the report says.

“We have already been affected,” said Rittl, who has a doctorate in ecology. “We are suffering increasingly frequent extreme meteorological events, storms, flooding, intense rains, associated with landslides and other disasters like the ones we had in the hilly areas of Rio de Janeiro (in 2011) or extreme drought like what we have seen in the Northeast,” he said.

These droughts can drag on “for years, leaving agriculture without water and people without drinking water, and accelerating the desertification process,” he added.

In the Amazon jungle, rainfall could decline by 45 percent. A drop in water in the rainforest, where a large number of hydroelectric dams are being built, would pose risks to the country’s energy supply.

In the pampas grasslands in the south and southeast, rainfall will rise 40 percent, causing more floods, Rittl said.

“In very poor areas of the Northeast, subsistence farming will suffer severe consequences, aggravating poverty and fuelling migration to urban areas,” he added.

Food supplies in Brazil depend heavily on family farming. “But in some regions, it won’t b possible to produce crops anymore,” he said.

Assad, however, stressed that the report did not reach the conclusion that food insecurity would increase in Brazil, although “a possible change in the geography of agriculture should be expected,” he said.

Researchers at Embrapa and the University of Campinas show that the coffee-growing areas of the southeast will no longer be suitable for the crop.

Embrapa is already working to develop more climate-resistant strains of coffee. It is also seeking more adaptable soy, maize and sorghum, as well as a kind of bean tolerant of high temperatures.

The report does not offer news with respect to climate scenarios, which have already been projected in Brazil. But because it systematises existing knowledge while revealing gaps in information, it is a roadmap for future research.

In 2009, Brazil committed itself to cutting greenhouse gas emissions between 36 and 39 percent, based on two scenarios of GDP growth.

The government says it is already two-thirds of the way towards that goal, thanks to the marked reduction in the deforestation rate.

But although advances have been made in that area, and a low-carbon agriculture plan (ABC) has been drawn up, climate change “is not a priority issue for the government” of Dilma Rousseff, according to Rittl.

“The big investment is still in traditional agriculture, which produces emissions,” he said.

Agriculture and energy “together account for 90 percent or more of the country’s emissions,” the expert said.

Assad mentioned things that are being done, such as investment in mixed agricultural systems – farming, livestock and forestry, recovery of degraded grasslands, greater use of direct planting or no-till farming, and biological fixing of nitrogen.

“We are implementing systems that capture, instead of emitting, carbon,” he said.

The aim is to reach 2020 with 20 million hectares cultivated using these methods. ”If monoculture continues, we’ll have problems, because with more rain and moisture, there will be more pests and plant diseases,” he said.

The expansion of the main monoculture crop, soy, is one of the causes of soil degradation and deforestation.

“The big agricultural sectors that used to believe that climate change wasn’t important now see that they are also vulnerable, and have become our allies,” Assad said.

But all of these methods and plans will fall short if the different ministries, “which do not communicate among themselves, do not start working together,” said Rittl. “We have to be much more prepared for the consequences if we’re going to confront this.”